Title: MASCARA-2 b: A hot Jupiter transiting a mV=7.6 A-star

Before we start: the system discussed in this astrobite was discovered separately by two teams and presented simultaneously. The other paper, by the KELT team, can be found here. This astrobite will focus on the results of the MASCARA team. 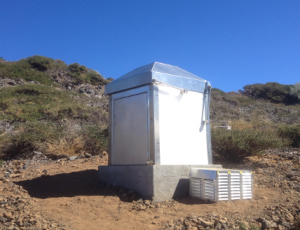 It’s clear that there are a lot of exoplanets out there. While large surveys like K2 continue to bring in hundreds of new planets, other projects are filling in the gaps that these surveys miss. The relatively new project MASCARA intends to find planets around the brightest host stars yet. They are targeting stars with magnitudes less than 8.4 (remember that fainter stars have higher magnitudes). For comparison, that’s still fainter than the human eye can see (magnitude 6 or less), but it’s a fair bit brighter than the Kepler space telescope can see (Kepler saturates on stars brighter than about 11th magnitude). There are currently only 14 exoplanet host stars known that are brighter than 8.4th magnitude, with the brightest being KELT-9 at a magnitude of 7.56. These exoplanets around bright stars are interesting because it’s so much easier to do follow-up observations on them. In particular, in-depth studies of exoplanet atmospheres — which require collecting starlight that has passed through the exoplanet atmosphere, and studying how the atmosphere has affected the starlight — are much easier when the exoplanet orbits bright stars like these, simply because there are so many more photons that reach us.

The MASCARA team operate a station at the La Palma observatory in Spain, observing the northern sky. Like many astronomical acronyms, MASCARA takes a bit of imagination: it stands for the Multi-site All-Sky CAmeRA. The station consists of five cameras, one each pointing North, South, East and West, and the fifth pointing straight up. Between them they can cover the whole visible sky. The cameras remain motionless while the stars pass overhead. Like Kepler, MASCARA is looking for exoplanet transits — the dip in a star’s light that means a planet is passing between us and the star. To do this, they take a series of six-second images with each camera. By identifying the same stars between images, and taking into account any atmospheric effects such as passing clouds, they can search each star for dips in brightness that might be exoplanet transits. 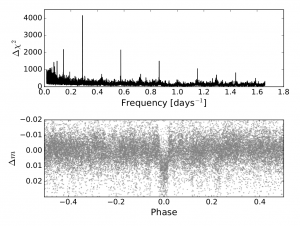 Figure 2: Searching for strong periods in the MASCARA data (top) and then wrapping data around on that period to see the transit shape (bottom). This is Figure 1 in today’s paper.

MASCARA-2b is the second exoplanet to be discovered by this method, but the first to be published (MASCARA-1b is also in the works, but 2b was pushed ahead in the queue because of a simultaneous discovery by another team). From the MASCARA data in Figure 2, a clear transit can be seen every 3.47 days. To follow this up, the team observed transits with the NITES, IAC80 and SONG telescopes. To emphasise how bright this star is compared to the usual astronomical targets: these are small telescopes — NITES in particular is only 40cm in diameter. Even these telescopes however had to be kept deliberately out-of-focus, blurring the resulting image and spreading the star’s light over more pixels, because otherwise there would be a danger of saturating the image. This practise is not uncommon for larger telescopes, but it’s surprising to see it necessary on these rather smaller telescopes. 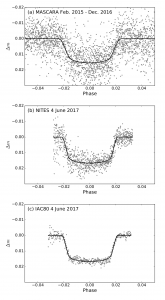 The host star has a magnitude of 7.58, narrowly missing the record. It’s also an A-type star, towards the hotter end of the spectrum, and as such the star spins on its axis faster than the average star does. Generally fast rotation makes spectroscopic measurements difficult, as the difference Doppler shift between opposite sides of the star smears out the spectral lines that we’re interested in. Aided by the system’s brightness, however, the team were able to obtain spectra that were high-enough quality to overcome this difficulty. They found that the planet is a hot Jupiter, orbiting at around 6% of the Earth-Sun separation, and that it has a radius around double that of Jupiter itself. They also found that the planet’s orbit is quite well aligned with the direction that the star spins — this is unusual for hot Jupiters in systems like this, which generally seem to orbit with a slight tilt. The team hope that the system is well-placed for follow-up studies of the planet’s atmosphere, adding to the fairly small pool of planets in which such studies are possible.

The MASCARA team is currently building a second MASCARA instrument in Chile, where it will be able to explore the southern sky — at present, only two of the fourteen brightest exoplanet hosts are southern. This same planet was simultaneously discovered by KELT, another project exploring the same types of stars. This is a growing area of exoplanet research, so look for further interesting results in the future!