Title: The association of a J-burst with a solar jet 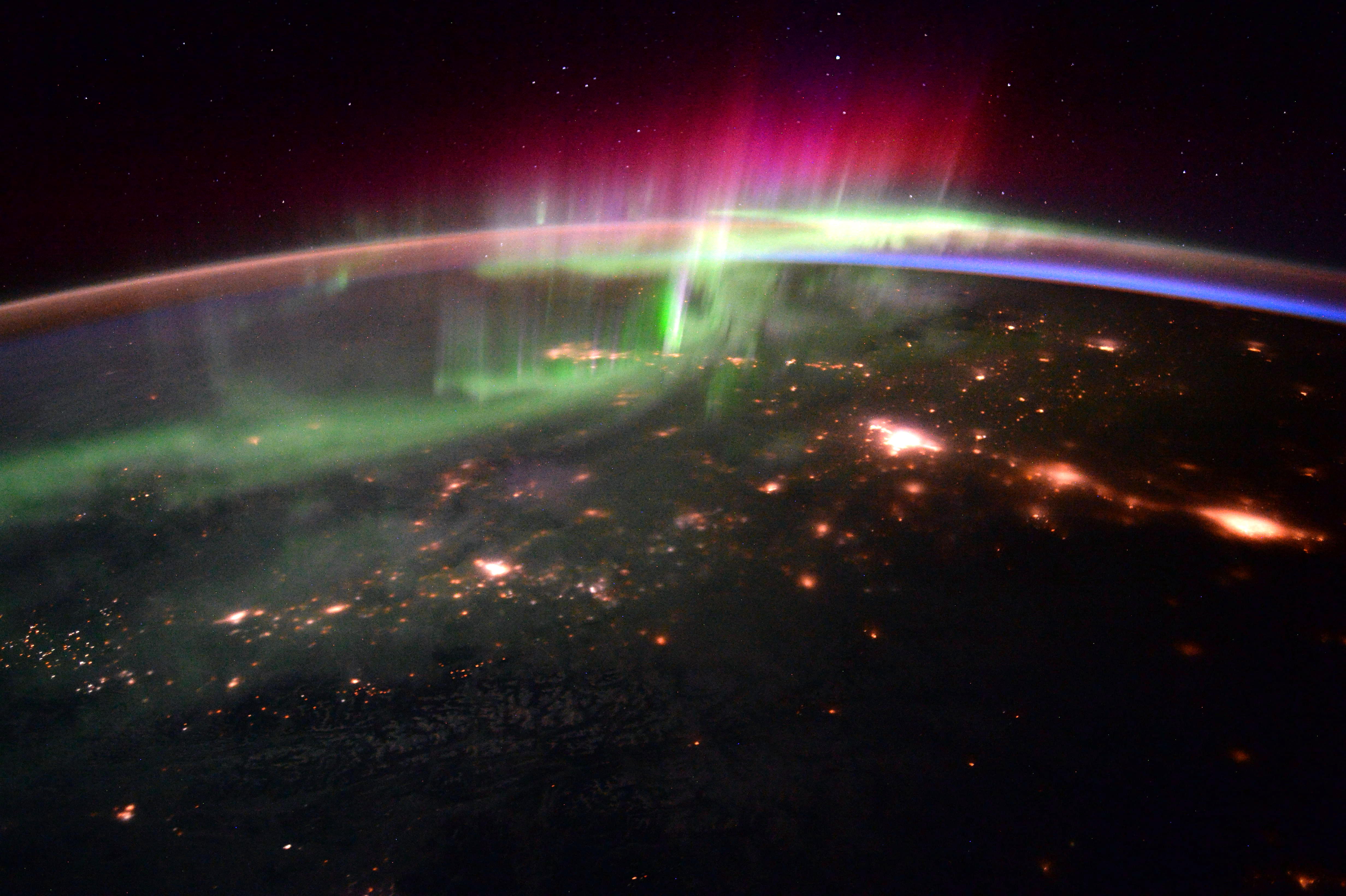 Figure 1: Charged particles from the Sun interacting with the Earth’s magnetic excite particles in the atmosphere, creating dazzling light shows – the Aurorae. This image was taken on the International Space Station (ISS). Credit: NASA

Our local star, the Sun, is an active star. It regularly sends streams of highly energetic particles hurtling towards our home planet, causing dazzling auroral displays at the poles, and occasionally we notice emissions in the radio regime.  Back in July 2013, an unusual and very bright burst of radio wave energy was observed by the Low Frequency Array (LOFAR) based in the Netherlands, with our Sun being the likely culprit. Today’s bite will illustrate how J-bursts, an unconventional type of jet from the Sun, differ from the so-called type III bursts commonly observed. Also, we will describe their likely origin and the proposed mechanism to explain their odd characteristics.

Figure 2: Twisting of magnetic fields from the rotation of the Sun stores energy in entangled field lines. When field lines reorganise themselves, they release bursts of energy. Credit: Addison Wesley

Being made of plasma (hot, ionised gas) means the surface of the Sun experiences differential rotation – the material at located towards the equator travels faster than material located at the poles. This leads to magnetic field lines, pointing from pole to pole, to become twisted over time leading to very strong localised fields and is the cause of dark regions on the Sun known as sunspots. Generally field lines do not want to be tangled, therefore they re-arrange themselves, resulting in energetic solar events such as: solar flares, jets and Coronal Mass Ejections (CMEs). These events causes particles to be accelerated along field lines as they travel away from the source of activity.

Solar flares and jets are commonly associated with X-ray emission and type III radio bursts, with the main difference being the resulting direction of the electron as it travels away from the Sun. Electrons accelerated by the re-configuring magnetic field can travel up through the corona, the aura around the Sun only visible during a solar eclipse, or down towards the layer located just above the surface (photosphere) – the chromosphere. Different layers of the Sun can be seen below in Figure 3. Figure 3: An artistic view dissecting the internal layers of the Sun. The regions of interest in today’s bite are the outer two layers – the chromosphere and the corona. Credit: NASA

It is the electrons accelerating towards the corona which result in type III bursts and are identified as rapidly varying bursts of radiation which last a few seconds. They are considered to be the radio signature associated with electrons travelling via the corona, into interplanetary space along magnetic field lines. Several typical type III radio bursts are visible as vertical bursts in the top panel of Figure 4. Generally type III bursts are the result of electrons escaping via the corona because they have access to open magnetic fields lines, but this is not always the case. 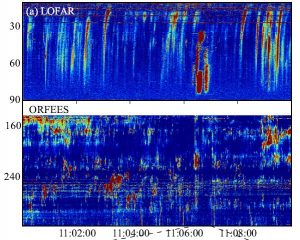 Figure 4: Multiple Type III radio bursts observed by LOFAR at frequencies in the range of 10 – 240 MHz. The top panel is a dynamical spectrum. It shows the strength of the signal of a certain frequency (vertical axis) as a function of time (horizontal axis).  Figure 1 of paper (top two panels)

Today’s peculiar burst contained no radio waves below 30 MHz (top panel of Figure 4), therefore the authors coined this particular burst a J-burst. It was observed using the Low Frequency Array (LOFAR) based in the Netherlands. For more details about LOFAR, check out this awesome astrobite.

Where did it come from?

Already suspected to be solar in origin, scientists turned to an observatory which has been observing the Sun since 2011 – the Solar Dynamics Observatory (SDO). The SDO is able to produce one high resolution image of the Sun every second, making it the best space-based eye we currently have on our local star when compared to the STEREO and SOHO observatories. A solar jet was observed by the SDO at a time and location coincident to the burst in question. Its evolution as a function of time is highlighted in Figure 5 by a white arrow. The jet glows in panel (b) but has faded by panel (d), lasting around 8 minutes in total. 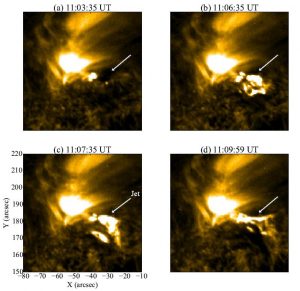 Figure 5: Evolution of jet which caused J-burst as a function of time. It glows in panels (b) and (c), but is not visible in (a) and has faded by (d). Figure 4 of paper

Scientists continued their investigations by plotting their LOFAR observations at different frequencies on top images taken by the SDO. Observations were extended to higher frequencies of 150 and 228 MHz via the Nançay Radioheliograph (NRH) based in France.  The evolving frequencies as a function of time tell an interesting story about the journey of some electrons. 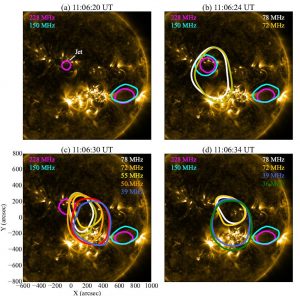 What is going on?

The  J-burst appears at 11:06:24 UT over a wide range of frequencies in Figure 6(b), including two LOFAR sources at 72 and 78 MHz  (white and yellow contours) are associated with the highlighted jet (pink contour). The 228 and 150 MHz sources in the bottom right of Figure 6 (a-d) appear to be unrelated to this J-burst as it lasts around 10s and does not drift in frequency like the J-burst does. The 150 MHz source (blue contour) visible in Figure 6(b) is a component of the J-burst, but it has faded by Figure 6(c).  The white and yellow contours shift to the right from their original location in Figure 6(c) which suggests we are sampling an electron beam moving in a different direction.

The radio sources 72, 78, 55 and 50 and 39 MHz move southwards from their initial location and decrease in frequency. By Figure 6(d) only the lowest frequency radio sources remain. The appearance and behaviour of the sources suggests an initial electron beam was accelerated to produce the burst in Figure 6(b) but eventually the electrons reached a region where they stop producing radio emission i.e they were no longer travelling upwards through the corona and had become trapped in a closed magnetic field loop – this could explain this lack of observations below 30 MHz shown in Figure 4.

An unusual burst of radio energy observed at frequencies above 30 MHz, a J-burst was likely caused by electrons, which are accelerated by the reconfiguration of the Sun’s magnetic field, becoming trapped within a closed magnetic field loop whilst travelling upwards through the corona. Even with a vast number of investigations and models of solar jets associated with radio emission, alongside a well-known classification system, there are still unanswered questions about their exact mechanism and the path followed by accelerated electrons in the solar corona. Today’s paper has explored these themes and arrived at some interesting conclusions, but there is a still a lot of work to be done.

This discovery does highlight the usefulness of radio emission as a tool to study the Sun’s magnetic field as its affect on charged particles, but it also puts an emphasis on the need for an instrument with a broader range of frequencies to probe flaring events associated with particle accelerations. The authors required the use of a wide range of instruments in order to draw their conclusions – something which might not always be possible – therefore they highlight the European Solar Radio Array (ESRA) as a highly promising candidate mission for future funding.