An Astrophysical Event (Probably) Won’t Kill Every Species on Earth

Title: The Resilience of Life to Astrophysical Events

Humans, despite our ingenuity and unrelenting will to live, are among Earth’s more fragile creatures. Though our susceptibility to extinction may seem like a pressing issue on a personal level, today’s astrobite delves into a more interesting thought experiment: which astrophysical events might be capable of wiping out every single organism on Earth. 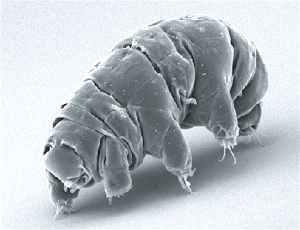 If we choose to concern ourselves with the extinction of all life on Earth, this paper — published last week by Oxford and Harvard astronomers — asserts that no organism is more suited to be our juggernaut than the tardigrade (specifically, Milnesium tardigradum; see Figure 1). These tiny creatures, which range in length from 0.3 to 0.5 mm, were dubbed “water bears” by their discoverers in the 18th century due to their shape and gait. Additionally referred to as both “space bears” and “moss piglets,” tardigrades can survive for several minutes between -272 C and 150 C, at pressures between ~0 atm and 1200 atm (between outer space and the Earth’s deepest trenches), and radiation doses up to 6200 grays (1 gray = 1 Joule/kg). Though they are widely considered to be the most resilient species on Earth, the tardigrade is not a true extremophile, as it is not evolved for long-term survival in extreme environments. It is instead able to tolerate the most treacherous conditions, but with dwindling success over relatively short time periods.

So, what can kill our ursine friends?

Asteroids, supernovae (SNe) and gamma-ray bursts (GRBs) have long captured our imagination as possible astrophysical causes of human extinction. Could we go the way of the dinosaurs, experiencing a jostling of our climate from an asteroid impact that kills 75% of all living species? Or perhaps meet our demise after having our atmosphere obliterated by an event as energetic as a GRB? For tardigrades, though, it is not clear that these scenarios could pose a threat to their continued survival. Emission from a GRB or SN, when the event is close enough to Earth, could easily destroy our ozone layer and bathe land-dwelling species in lethal amounts of cosmic radiation; however, species living deep underground and underwater could likely survive. Similarly, an extreme decrease in temperature due to an asteroid impact would leave those species unharmed. A simple calculation shows that so long as our oceans are deeper than a couple meters, the main threat to the life of a tardigrade is the boiling of every body of water rather than lethal radiation doses (which require a higher energy deposit than that which is required to boil away our oceans).

In order to raise the temperature of the oceans by some amount T which is sufficient to kill tardigrades, an asteroid would need to impart some amount of energy E = MCT where M is the ocean’s mass and C is the specific heat capacity of water. The energy requirement for such a temperature gain is the free-fall energy of an asteroid of some mass Ma from infinity to the Earth’s surface (a value dependent on Ma and the escape velocity of Earth). Solving for Ma indicates that an asteroid with mass > 1.7×1018 kg would have to strike the Earth to cause the required temperature increase. The authors show that the rate of impact of such objects over our planet’s life is fewer than 10-5 collisions per billion years; that is, such a massive impact is extremely rare (see Figure 2). 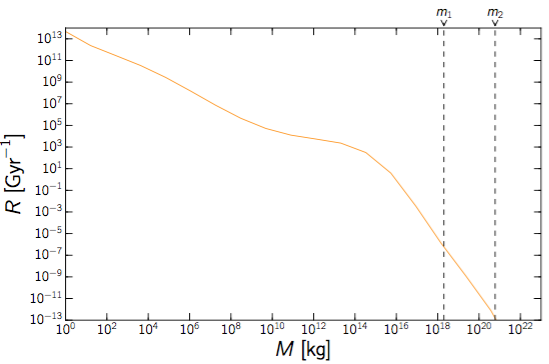 Figure 2: Plot showing the effect of asteroid mass on asteroid impact rate. Mass m1 is the necessary mass to boil the Earth’s oceans, while m2 is the mass required to destroy the Earth outright. Figure 1 in the paper.

A similar procedure can be applied to determine the danger posed by SNe. These events, which mark the explosive death of massive stars, can emit between 1044 and 1046 joules of energy. This time, the authors solve for the distance to the SN assuming that all of the energy is carried in the SN shock wave (a not wildly unreasonable, but still very conservative approximation). They find that the distance at which an SN must occur in order to obliterate all life on Earth is about 0.04 pc, or 1.2 x 1012 km. The closest star system is α Centauri, which is vastly far away (1.34 pc or 4.1 x 1013 km) and does not contain any stars massive enough to experience an SN event. Broadening their focus a bit, the authors explore how susceptible planets in higher-density stellar environments (closer to the Milky Way’s center) are to destruction (see Figure 3). They find that even planets very close to the Galaxy’s center are only at a ~1% risk of having their organisms wiped out by an SN event. 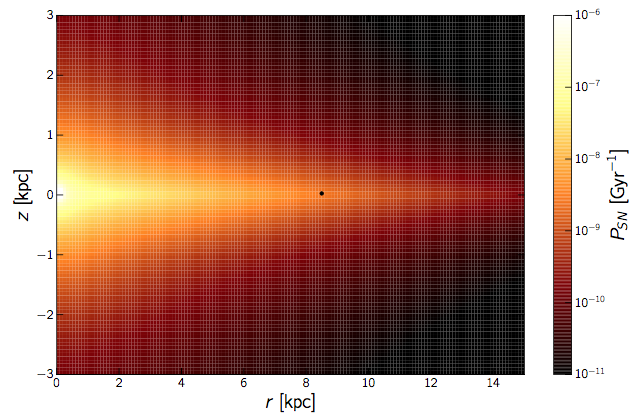 Figure 3: This plot shows the probability of an SN explosion causing sterilization (occurring within a 0.04 pc radius; see color bar on right) as a function of position in the Galaxy. The black dot is our solar system. Figure 2 in the paper.

The threat posed by GRBs (the brightest events observed in the Universe) can be assessed in a similar way to that of SN events. GRBs are unique, however, because their radiation is beamed into small, collimated jets. This is a double-edged sword deadliness-wise: they can impart more energy than an SN, but it is less likely for a collimated beam to be pointed straight towards Earth. For example, a GRB pointed at the Earth could be as far as 13.8 pc (4.3 x 1014 km) away to sterilize Earth, but the event rates and geometry yield a probability rate of 3.2 x 10-10 per billion years.

Is this good news for the continued survival of life on Earth?

Sure — for a short time. The authors assert that, even with conservative assumptions about the hardiness of tardigrades and the amount of energy required to sterilize Earth, the overall probability of such an event is only 10-7 per billion years. While it is clear that an astrophysical event is unlikely to wipe out all life on Earth, the fact remains that another astrophysical process — the evolution of our sun — will still guarantee our demise. Within a few billion years, the sun will be so bright that our oceans will boil and Earth will no longer be suited to hosting life. Though it’s not clear that our planet will be literally engulfed by the sun (as our orbit is likely to grow as the sun loses mass), the death of all species is inevitable. In the end, it’s best to stay grateful for the fact that we probably won’t be obliterated by a GRB any time soon.