This guest post was written by Tracyanne Roberts, the Education and Public Outreach (EPO) Coordinator for CalTech/IPAC. Tracy is the lead on a NASA Universe of Learning project called STEMdex, a project to streamline access for the astronomy EPO community and improve knowledge of published STEM (Science, Technology, Engineering, and Math) education research literature.

How smart are you? Did you get where you are today by sheer brilliance, or due to copious hard work? When did you become a science geek? And hey — are you a nice person? Perhaps not a surprise — but your answer to these questions likely depends upon your gender. Even more distressing, it is likely you formed views of your intelligence before you finished kindergarten! And furthermore, whether or not you became a scientist was likely set before you finished middle school. 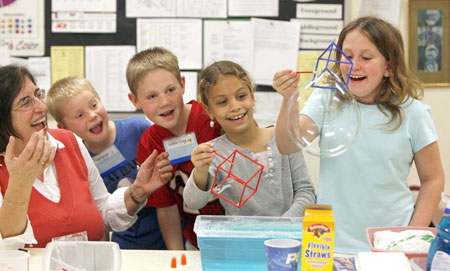 Students’ interest in science may already be determined by age 14, according to a new study. [Brendan Fitterer | Tampa Bay Times]

Such are the results from two recently presented papers that examine student attitudes about brilliance and scientific interest. The first paper points to the startling supposition that, at the grand old age of 6, girls begin to view their own gender as less intelligent than males and begin to alter their activities and interests accordingly. The second paper strongly points to students’ interest in science being set between the ages of 10 and 14. These papers jointly support the notion that very young children begin to alter their interests and activities based upon stereotypes, and that by age 14, individuals have largely developed toward becoming a science enthusiast … or not.

Common stereotypes associate high-level intellectual ability (brilliance, genius, etc.) with men more so than with women (and it seems that most people associate being nice with being female, by the way). A new study has found that by age 6, girls are less likely than boys to believe that females are “really, really smart.” Also at that time, girls begin to avoid an activity if told the endeavor is for smart people. “Gender Stereotypes About Intellectual Ability Emerge Early and Influence Children’s Interests” suggests that children acquire stereotypes about brilliance during first grade and that immediately begins to affect their interests. Tragically, the slight differences in daily choices about games and activities can accumulate over years, leading to life-changing gender gaps in experience and knowledge. The glass ceiling begins in elementary school.

“Even though the stereotype equating brilliance with men doesn’t match reality, it might nonetheless take a toll on girls’ aspirations and on their eventual careers,” observed Cimpian, the paper’s senior author.

In agreement with Cimpian’s statement, the paper “Attitudes Towards Science: An Update” finds that “…by the age of 14, for the majority of students, interest or not in pursuing further study of science has largely been formed. Moreover, in the case of girls, their attitude is significantly more negative, particularly toward the physical sciences.”

Paper 1: Boys Are Smart, Girls Are Nice, but Everyone Can Try Hard

The studies in “Gender Stereotypes About Intellectual Ability Emerge Early and Influence Children’s Interests” were undertaken to examine the age at which brilliance stereotypes begin to arise. In one task, the children were told a brief story about a person who was “really, really smart.” Children then viewed pictures of four unfamiliar “targets” (two male, two female), and were asked to identify the protagonist of the story. 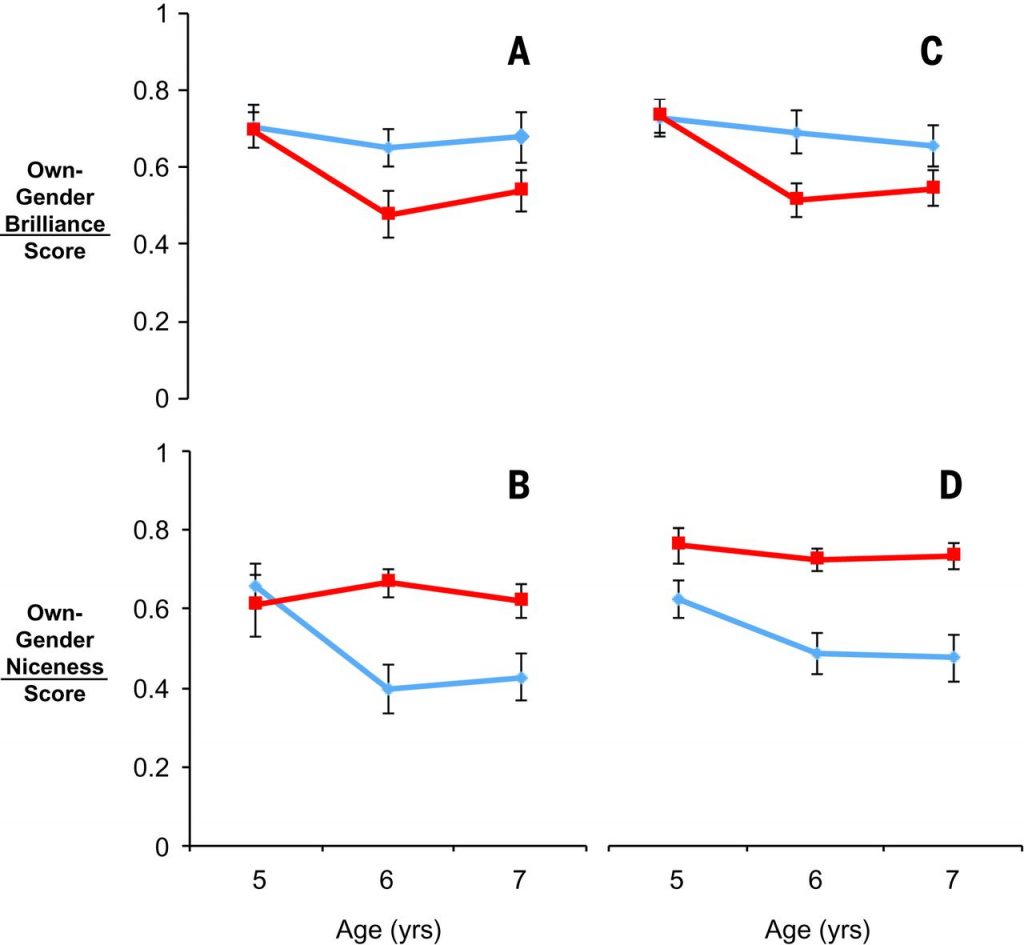 Figure 1: Boys’ (blue) and girls’ (red) stereotype scores in two independent studies. A and C show how children of different ages rated the brilliance of their own gender. B and D show how they rated their gender’s niceness.  [Bian et al. 2017]

All of the “targets” were deemed to be of similar attractiveness and dress to avoid potential subtle bias. In some studies, all targets were adults whereas in other studies, the targets were pictures of adults and/or other children. The results did not differ significantly by whether children rated adult versus child targets, and were similar across various socioeconomic and racial-ethnic backgrounds within the study.

In other tasks, the children saw several pairs of same- or different-gender targets and guessed which person was “really, really smart” or “really, really nice.” Common stereotypes of being “smart” and of being “nice” are traits that are frequently differentially linked to gender, and could provide further information about the age at which stereotypes develop.

The results showed that both boys and girls aged 5 viewed their own gender as intelligent. But girls aged 6 and 7 were significantly less likely than boys to associate brilliance with their gender (Figures 1A, 1C). The stereotype associating females as being nice follows a similar development (Figures 1B, 1D). In both studies, the results suggest that children’s ideas about “brilliance” and “niceness” exhibit rapid changes from age 5 to 7. Thus, the stereotypes that “brilliance = males” and “niceness = females” may already be embraced by children as young as age 6. 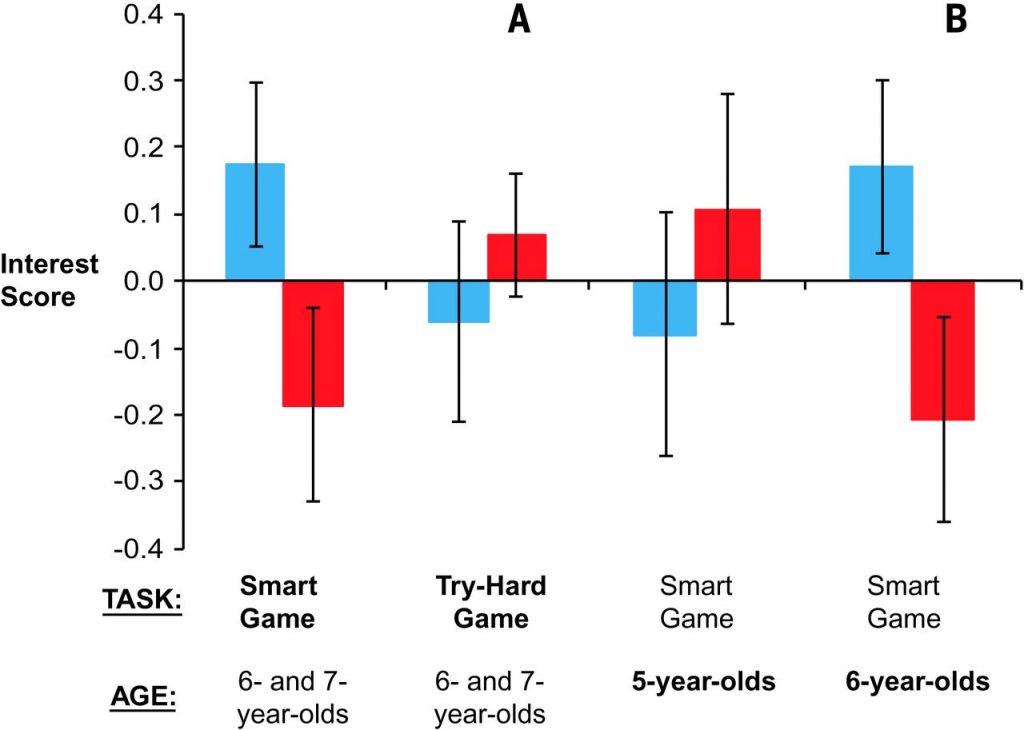 Next, the authors investigated whether children’s gendered beliefs influence their activities and interests. In the next studies, children were introduced to two games, one said to be for “children who are really, really smart” and the other for “children who try really, really hard.” The content and rules of both games were very similar. Children were asked four questions to measure their interest in these games (e.g., “Do you like this game, or do you not like it?”).

Girls at 5 years of age showed interest in playing the smart game, but at age six, exhibited a markedly decreased interest (Figure 2B). In contrast, both genders exhibited similar interests in the try-hard game, with girls expressing a slightly greater interest. Combined with additional tasks, the results indicate that young children’s emerging notions about intelligence guides their decision regarding which activities they want to participate in.

Indeed, if these attitudes alter a child’s activities during elementary school, and science is stereotypically considered “for really, really smart people” rather than for people who “try really, really hard,” girls become increasingly unlikely to engage in activities that will lead them toward an interest in, and readiness for, a scientific career.

So what does motivate boys and girls to pursue science? Figure 3 reveals the scientific topics that most interest boys versus girls, according to one survey. While the stereotype of boys liking explosions may make us chuckle, it is clear from this list that we must become aware of how we interact with and motivate even the very youngest people in our spheres. Both genders are equally adept and capable, and we must become better at nurturing individual motivational differences in the youngest children to bring out the best of their abilities — whether they are science-focused or not.

Figure 3: The 5 top ranked items boys and girls would like to learn about in science. [Jenkins & Nelson 2005]