Title: Flux-ratio anomalies from discs and other baryonic structures in the Illustris simulation

When a photon perilously escapes being engulfed by gases in its galaxy, it embarks on a long journey to reach our telescopes. Along the way, the combined gravitational field of nearby galaxies and galaxy clusters lures the photon away from sticking to a straight path. Occasionally, its path gets very bent when it passes very close to a galaxy, so much so that when the photon reaches our telescope, we see multiple images of the galaxy where the photon originates. This phenomenon of light bending due to the gravity of matter is known as gravitational lensing.


As you gaze at the Sun later today during the solar eclipse, remember Albert Einstein, Sir Arthur Eddington, and gravitational lensing. Nearly a century ago on May 29, 1919 when the Sun was completely eclipsed by the Moon, on the west coast of Africa and Brazil, Sir Arthur Eddington and his team proved Einstein’s theory of general relativity. On the day of the eclipse, the Sun was destined to pass by the Hyades cluster, and the darkness that ensued cause the stars to be visible. Eddington and his team measured the stars to have shifted in positions due to the Sun’s gravitational field by the amounts predicted by Einstein. This was also the first observation of gravitational lensing. (Here is how you can try observing lensing for yourself during the eclipse today!)

Past studies of flux ratio anomalies assumed that the anomalies arise solely from dark matter substructures. However, recent simulations show that our canonical Cold Dark Matter (CDM) model, where the dark matter moves much slower than light speed, does not produce enough substructures to reproduce observations. So what else could have caused this “excess” flux ratios? The answer could be downright boring normal matter, or baryons.

The authors set out to quantify the effects of baryons on flux ratio anomalies using a cosmological hydrodynamical simulation known as the Illustris simulation. They extracted a sample of disk and elliptical galaxies using morphological selection and by determining the percentage of stars that lie in the bulge and the disk. For their disk galaxies, they picked galaxies with different inclination angles, from face-on to edge-on to ones in between. Figure 1 shows some examples of their disk galaxies from Illustris. In order to explore pure baryonic effects, none of their lens galaxies have dark matter substructures.

The authors projected light rays, or ray-traced, through their lens galaxies to the observer to simulate the lensed images and their flux ratios. Figure 2 shows the strength of the flux ratio anomaly for a smooth lens model as a function of opening angle (or angular separation; see Figure 1 of this paper) of the lensed images. Try comparing Figure 2 to Figure 3, the same figure but for the disk and elliptical galaxies. If baryons have no effect on the flux ratios, Figure 3 should look very similar to Figure 2. But this is not the case — there is a large scatter in the anomaly strength across all opening angles. If you examine the figure longer, you may also notice that edge-on disks produce the most scatter. For instance, the colored bands shift between the smooth lens model and the lens sample, and between the disk and elliptical galaxies. Quantitatively, baryons increase the probability of finding high flux ratio anomalies in elliptical galaxies by almost 10% and in disk galaxies by 10-20%.

Figure 2: Strength of the flux ratio anomaly as a function of opening angles of the lensed images for a smooth lens model. The left panel is for a cusp image configuration and the right panel is for a fold configuration (see Figure 1 of this paper). The different colored lines are probability contours for observing a certain anomaly strength at the given opening angle, with the shaded regions being the one sigma uncertainty. Red points are the ray-tracing results. Black and blue points represent observations, with edge-on disk lenses being the blue points. [Figure 5 in paper] 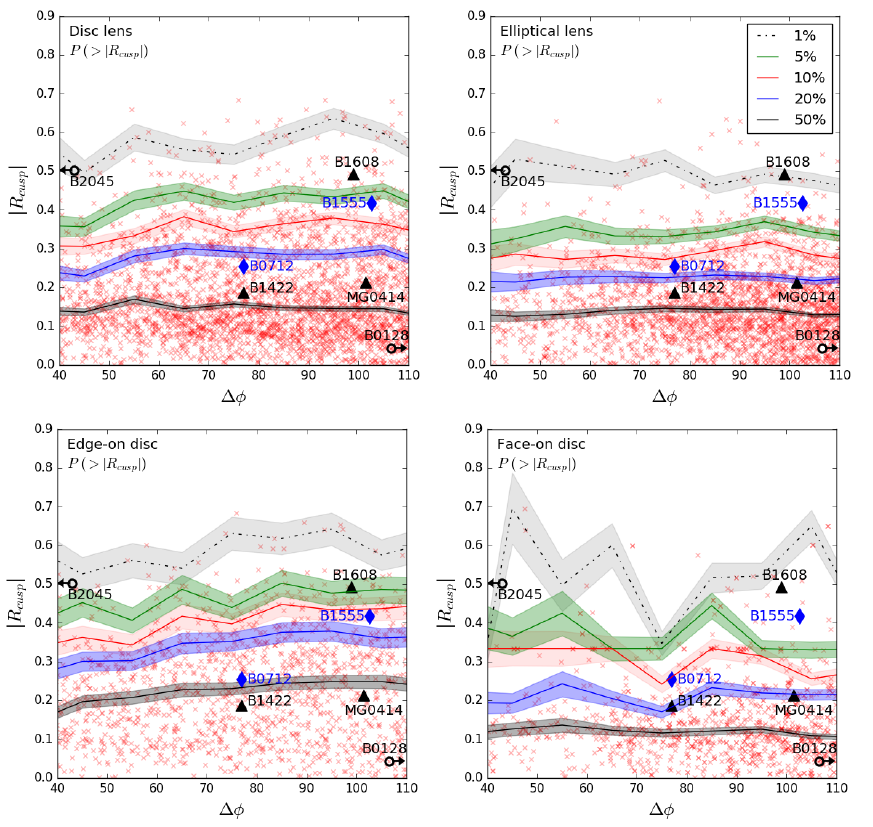 This study finds and quantifies baryonic effects on the flux ratio anomalies of lensed systems. The effects are non-negligible, so future studies should account for these. Baryons, it seems, do not want to be left out of dark matter’s limelight and has been caught playing sneaky pete on us.