Snowballing into gas giants… kind of

If you’ve ever searched for pictures of Jupiter on the web – and if you haven’t, you definitely should! – you’ve probably come across gorgeous images of the giant planet’s swirling surface, and the iconic, mystifying, stormy red spot. 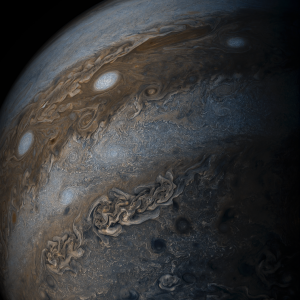 But there’s something that these breathtakingly beautiful pictures don’t show: what’s going on beneath the surface?

It’s still a mystery exactly what goes on within the cores of gas giants like Jupiter.  But the authors of today’s astrobite set out to place another piece in the puzzle of gas giant formation.  They considered heat transfer (literally the transfer of heat) within gas giants – specifically those that form by the core accretion model with a “hot start”.  Core accretion refers to the process of some object pulling in surrounding material and growing from it, kind of like a snowball getting larger as it rolls down a hill.  And a growing gas giant that has a “hot start” has a very hot, luminous outer boundary.

Before we look at what the authors found out, let’s take a quick peek at some of the ideas behind heat transfer itself.

Entropy (and other things) right above your oven

One key term relating to heat transfer is that of entropy.  Entropy has more than one definition and usage, but here we can think of it in terms of heat.  The entropy of a system indicates how impossible it will be (although, of course, nothing’s impossible) for that system to turn thermal (aka, heat) energy into mechanical work.  Mechanical work involves moving something through a force; a higher entropy, then, means that the system will find it harder to force things to move using thermal energy.

Radiation comes from the stovetop itself.  The fire from the stovetop releases thermal radiation, which is heat in the form of electromagnetic waves.  If you put your hand above a stovetop fire (kids, don’t try this at home!), you can feel the heat radiating away from the surface, just like the heat you can feel when standing beneath the Sun’s warm rays on a sunny day.

(Want to learn more about entropy and work?  Take a look at this link and this other link.  And if you want to read more on convection, radiation, and their cousin conduction, check out the examples and snazzy graphics at this link.)

Modeling the growth of giants

So we can infer that if the interior of a gas giant is fully convective, then the stuff in the core – like the water in the pot – will get pretty mixed up.  On the other hand, if the core is fully radiative, the material in the core won’t mix, because heat would be transferred only through electromagnetic waves.

Previous studies have often assumed that hot-start, core-accreting gas giants have fully convective interiors.  Today’s authors tested that common assumption.  They used equations and modeling, including the code known as the Modules for Experiments in Stellar Astrophysics (aka, MESA), to calculate and simulate the insides of these growing gas giants. 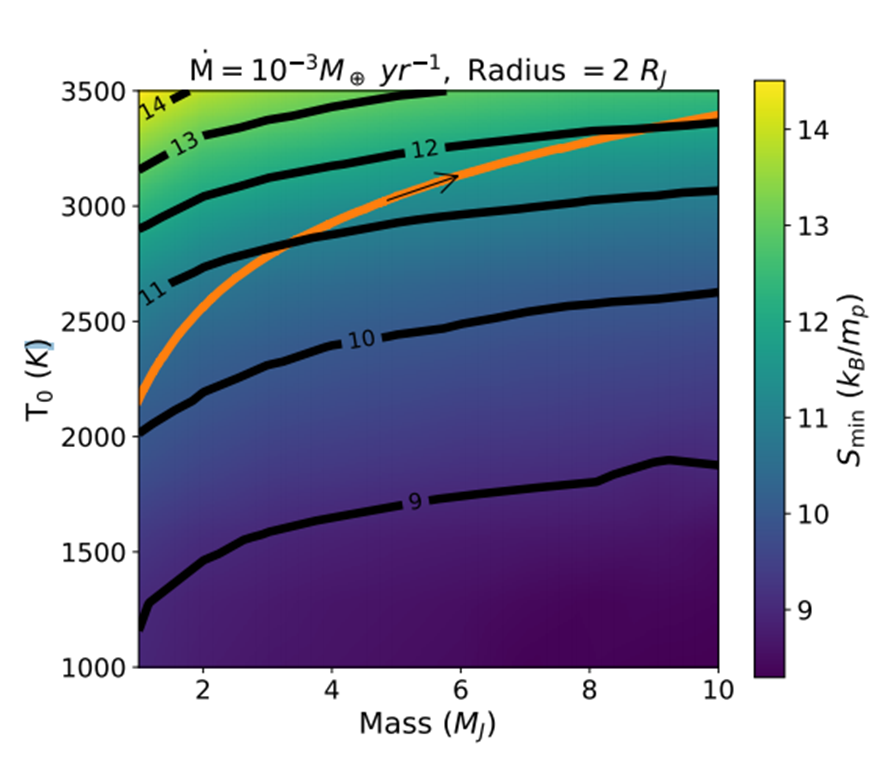 Figure 2: This colorful grid plot illustrates the minimum entropy at the edge of a planet’s accreting envelope, as a function of mass and edge temperature.  The planet is twice the radius of Jupiter, and accretes mass at a rate of 0.001 Earth masses per year.  Mass (in units of the number of Jupiter masses) increases from left to right on the grid, while temperature (in units of Kelvin) increases from bottom to top.  The color at a particular spot in the grid (following the colorbar on the right) indicates the amount of minimum entropy for that particular mass and temperature.  The black lines trace out contours of minimum entropy; so along the black line labeled ‘9’, for example, the minimum entropy has a value of 9 (in units of the Boltzmann constant, k

, over the mass of a proton, m

).  Finally, the orange line tracks the path of minimum entropy for a growing gas giant that the authors simulated over time, in the direction of the black arrow.  Figure 1 in the paper.

Figure 2 is one neat result of their calculations.  It depicts the minimum entropy at the edge of the growing giant’s envelope, as a function of the planet’s mass and edge temperature.  As the giant grows, it adds on more layers (like the growing snowball), each with their own minimum entropy.  The difference in entropy between the newer, outer layers and the older, inner layers will affect how those layers transfer heat.  Remember – more entropy means that it’s harder for the system to turn thermal energy into mechanical work!

The orange line in Figure 2 carves out the pathway of the minimum entropy measured from one of the giants that the authors simulated.  As the black arrow shows, the simulated giant’s minimum entropy increased with time.  From this, and other, calculations, the authors concluded that hot start, core-accretion gas giants form with radiative interiors, and may switch to convection after they finish accreting and begin to cool down.

This calculation has some mighty implications for the compositions of these giants.  For one, it implies that, without convection, these giants wouldn’t continuously mix the material (again, like the boiling water in the pot on your stove) between their inner and outer layers.  As such, heavier elements could be trapped during formation within the giants’ cores!   Heavier elements that are deposited onto the outer layers by colliding objects, like planetesimals, also won’t mix through convection towards the planet’s inner layers.  The authors warn that the unmixed layers of the gas giant, then, could later affect how the planet cools after accretion – and this, in turn, could affect the masses we estimate from directly-imaged gas giants. 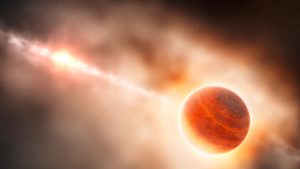 Their findings help us tell another story in the grand tale of gas giants, and with it, fill in another gap in the puzzle of their formation.  Now, when we look at the thick clouds shrouding gas giants like Jupiter, we know a little bit more about the cores hidden far beneath the surface.  And even though we can’t see those cores, we can say a little bit more in the story of how they might have come to be.