Direct imaging has turned up only a handful of planets. However, as observing sensitivities get better in the coming years, the technique will become a powerful probe of planet formation physics. Part of the reason planets are so challenging to image is that planets don’t carry out fusion themselves, so they just slowly cool and become dimmer with time.

How, exactly, do they cool? We need to know this in order to convert the measured luminosity of a planet into meaningful data, like the planet’s mass. For that, we have to mostly rely on evolutionary models to predict the cooling curve. The authors of today’s paper do this by tackling the physics of the accretion process during its most rapid phase, when the growing protoplanet’s gravitational well consumes material as fast as the surrounding disk can supply it.

In the field of planet formation physics, “hot start” and “cold start” and a gradient of “warm” starts in between refer to the starting entropies of planets. These terms do not necessarily indicate the formation mechanism. The authors of today’s paper specifically investigate the core accretion mechanism to see what interior entropies, and by extension luminosities, it can lead to.

Fig. 1: Left: The mishmash of quantities the author’s monitor in growing planets. At the shock boundary, material accretes at a rate M-dot, and an accretion luminosity Laccr is contributed to the planet’s luminosity. T0, P0, and S0 are the temperature, pressure, and entropy just below the shock. Material settles and compresses in the envelope before reaching the radiative-convective boundary. Sc is the entropy in the core. From Fig. 1 in today’s paper. Right: An example plot showing the regimes of resulting entropy Sf of a 10 Jupiter-mass planet as a function of T0 and P0, after it began accreting at an initial entropy Si. The color scale is in units of Boltzmann’s constant per proton mass. From Fig. 6 in today’s paper.

As material falls into an accreting planet, it loses gravitational potential energy. How much of that energy gets radiated away, and how much is incorporated into the planet’s internal entropy? The physics surrounding the shock is critical here. With a stew of boundary conditions, “jump” conditions around the accretion shock, assorted assumptions, and the open-source stellar evolution code Modules for Experiments in Stellar Astrophysics (MESA), the authors monitor different layers of the growing planet (Fig. 1, left).

They find that the planet’s internal entropy is set by the difference between the initial entropy Si and the entropy S0 of the accreting material as set by the temperature and pressure at the shock boundary (Fig. 1, right). In some cases, core accretion can lead to “cold” starts with luminosities less than about 5×10-6 Lsun if the accretion rate is small and on the order of 10-3 Mearth per year, if the initial entropy is low, and if the shock temperature is close to that of chilly nebular temperatures. But many core accretion scenarios actually result in much more luminous planets. As the authors outline in their summary, the core accretion formation regimes include (see Fig. 2) 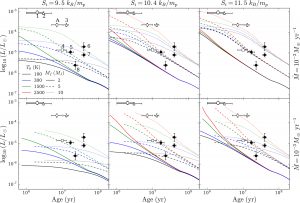 Fig. 2: Luminosity curves as a function of planet age, in subpanels for different combinations of initial entropies Si and accretion rates. The data points are directly imaged planets. Number 8 is 51 Eri b, the chilliest directly imaged planet found so far, and the closest contender for a “cold” start formation. Letter A is the possibly-still-accreting planet HD 100546 b. From Fig. 12 in today’s paper.

The authors plot expected cooling curves and overlay data points of directly imaged planets. In Fig. 2, the bundles of lines corresponding to different planet masses are fairly tight, especially if the planet is a few tens of millions of years old. But if the mass of a very young planet can be independently determined, then under certain circumstances (like additional constraints on the accretion rate, for example), the luminosity can help constrain the exact formation scenario. One particularly interesting example is the young planet HD 100546 b, which is embedded in an asymmetric protoplanetary disk and is probably still undergoing accretion.

Currently, though, figuring out how well the data points in Fig. 3 agree with the models is a tricky business without measuring the planet masses in a way that does not also depend on a cooling model. Fortunately, this is beginning to change with Gaia, which can help determine masses of planets by monitoring the way they tug on the host star. Observationally, it will also be important to carry out spectroscopy of accreting protoplanets to determine how much of the luminosity comes from the shock itself (see Fig. 1), and to actually spatially resolve the accretion emission to put better constraints on the details of the accretion process.

On the theory side, the authors call for models that allow parameters which they kept fixed—like T0 and the accretion rate—to vary in time, and to incorporate more complications like the effects of dust grains, accretion asymmetries, and whatever other individual circumstances may be in play during the formation of a given planet. As the symbiotic trifecta of high-contrast imaging, Gaia data releases, and sophisticated modeling continue to advance, we may yet use the luminosity of young planets to illuminate the broader physics of massive planet formation.