We’re still unsure how life began, but we have plenty of ideas for how to snuff it out completely. From global warming to an asteroid collision, rogue AI to a supervolcano explosion, we have a morbid ability to imagine our own demise (and dramatic rescue, if you have a Bruce Willis with a thermonuclear weapon). But the cosmos has far more powerful means of sterilising planets beyond the solar system, and depending on how common they are, the chances of life lasting elsewhere in the cosmos could be slim indeed. 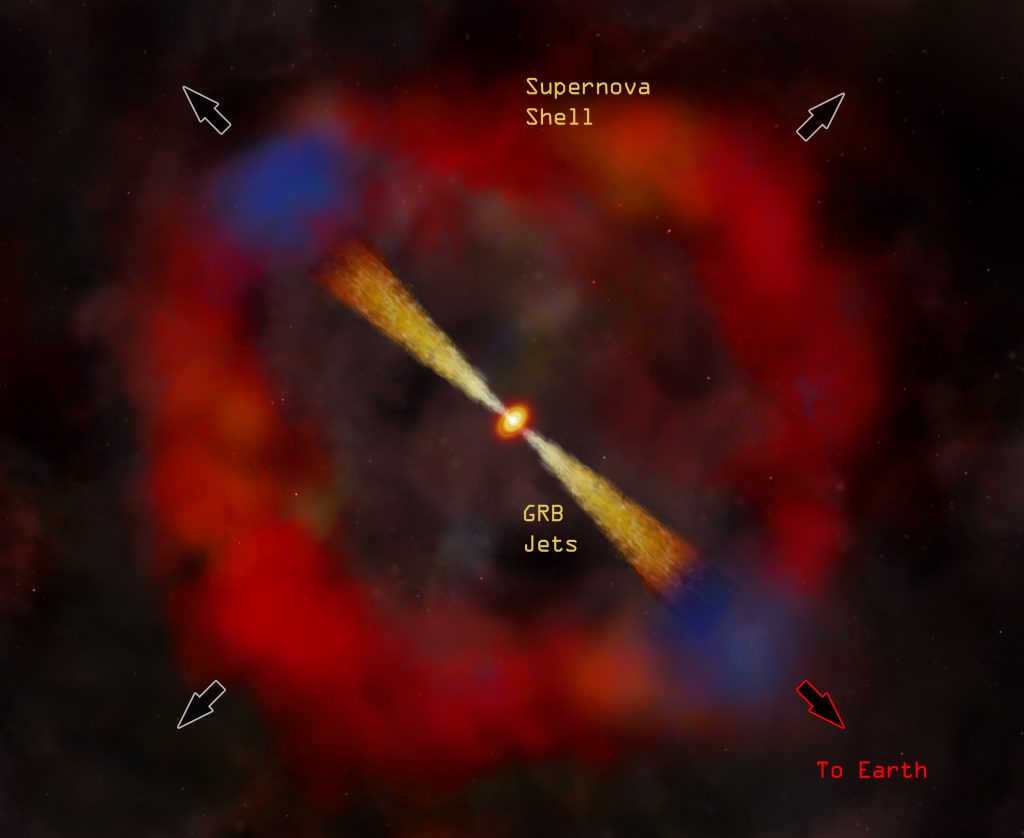 Figure 1: Illustration of a Gamma Ray Burst (GRB). Most of the energy is emitted along the jet axis. Courtesy of the Chandra X-ray Observatory.

Explosions in the sky

Massive stars end their lives in massive explosions known as a supernovae (SNe), and if they are rotating rapidly enough can lead to gamma ray bursts (GRBs). GRBs can also occur during the collision of two neutron stars. Both SNe and GRBs release massive amounts of hard, ionising radiation that can dissociate complex molecules, or strip the atmosphere of a planet completely, killing any complex life on the surface. Such extinction events are not purely hypothetical – at least one mass extinction event in the history of life on Earth, in the late Ordivician period, has been attributed to a GRB.  The supermassive black holes at the center of every galaxy can also release huge amounts of radiation when they’re accreting matter (hence the name, Active Galactic Nuclei, or AGN), which can irradiate any nearby stellar system in a similar way to a SNe or GRB.

In today’s paper, the authors use a cosmological simulation combined with a stellar evolution model (that takes into account the effects of metallicity) to study how such extinction events affect the habitability of stars in a galaxy. This type of cosmological simulation follows many thousands of galaxies that can interact and merge together, processes that can have a profound effect on star formation and, in turn, how many SNe and GRB events occur in a galaxy over time.

During each timestep in the simulation they sample individual SNe and GRB events in a galaxy, depending on its star formation rate and metallicity. For a single SNe, they define all stars within 8 parsecs as uninhabitable. GRBs don’t emit their radiation spherically, but in a jet oriented along a single direction. Despite this, a single GRB still irradiates a volume of stars 1900 times larger than a single SNe explosion. 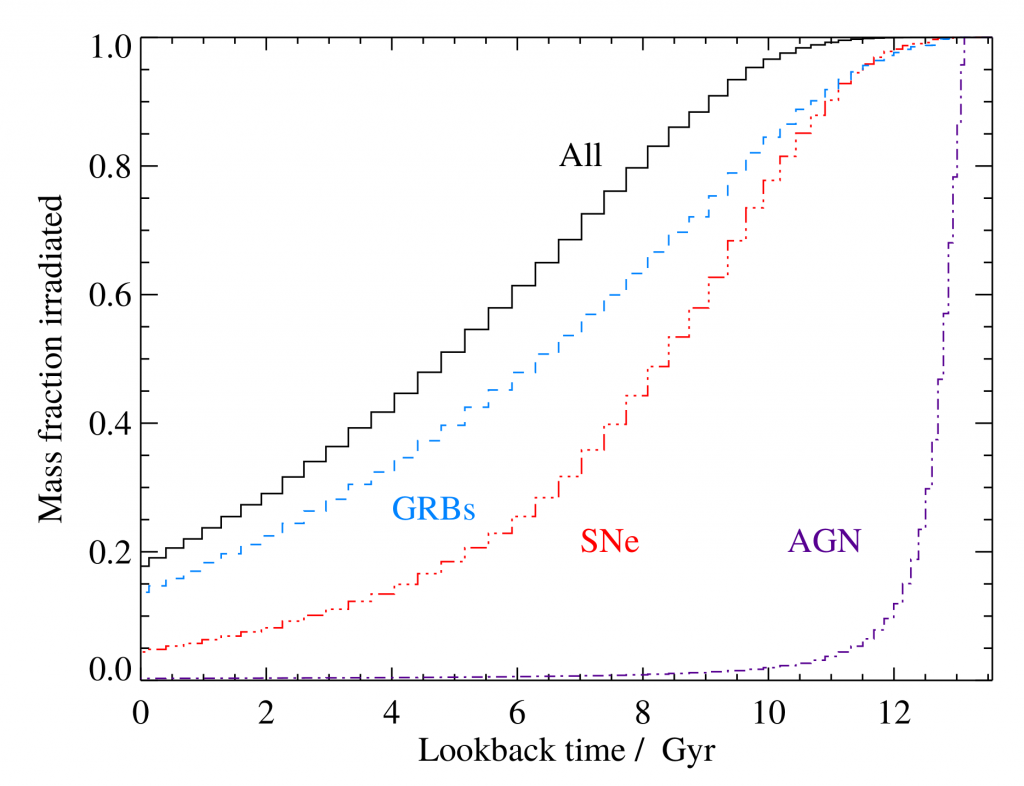 Figure 2: the fraction of stellar mass irradiated as a function of look-back time, in billions of years, split in to the contributions from SNe, GRBs and AGN.

Figure 3 shows the mean fraction of habitable stars as a function of the galaxy stellar mass. For SNe, only the most massive galaxies are significantly affected. However, when also taking into account GRBs and AGN, low and intermediate mass galaxies are much more susceptible to irradiative events. Interestingly, galaxies with a mass of around 1011 solar masses are least susceptible – which happens to be the same mass as our own Milky Way galaxy. 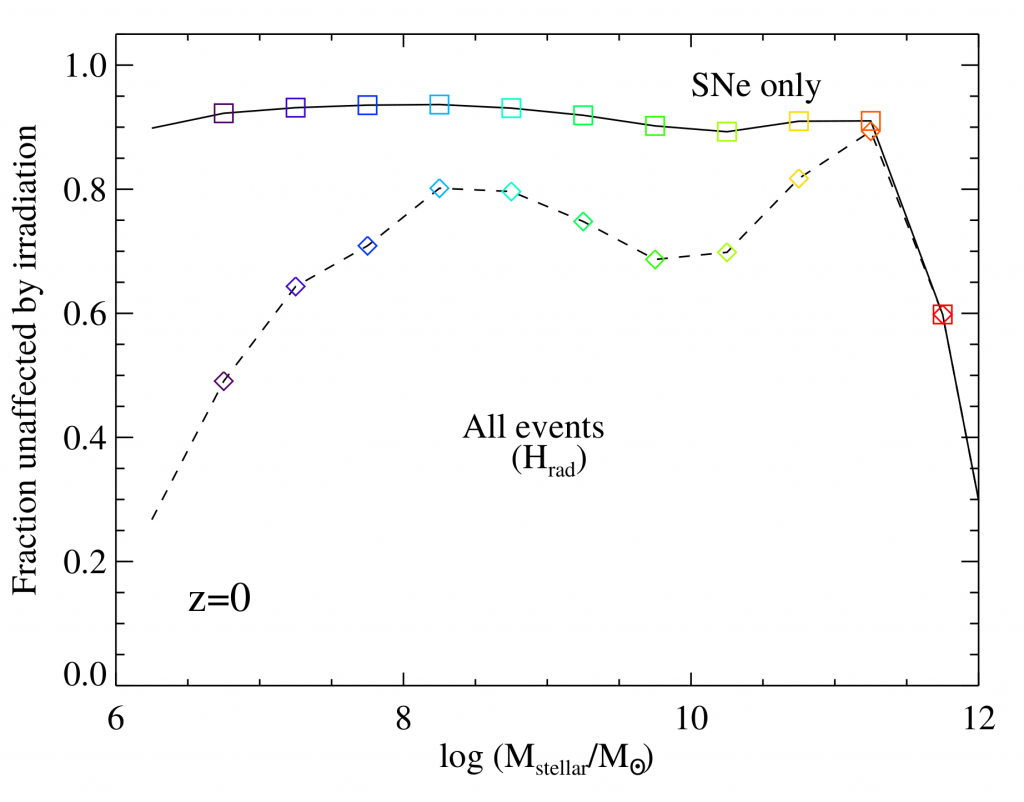 The authors note a few significant limitations of their approach. For a start, the model they use does not self-consistently predict galaxy shapes and sizes, so they make the simplifying assumption of spherical symmetry. They also assume that each supernovae irradiates a similar volume, which is almost certainly not the case – superluminous supernovae are up to a thousand times more powerful than typical supernovae, and could irradiate a much larger volume. The assumption that life requires the presence of an atmosphere, as we see on Earth, is also questionable, especially given the varying atmospheric conditions on Earth throughout biological history.

This model is still the first to look at the effect of the full merger history of galaxies in a cosmological context on the probability of life. Until (if?) we first make contact, the possibility will remain that the cosmos is a much more harsh and uninhabitable place than we first thought, and that perhaps our existence is more of a cosmic fluke than an inevitability.