Like the name suggests, superluminous supernovae are the Madonna-level superstars of the supernovae world. These explosions are about 100 times brighter than the typical core-collapse supernovae (the death of a massive star), although we are not exactly sure what kind of star explodes to cause them. You might expect that, like real superstars, these superluminous supernovae live in big, bright, fabulous galaxies, but today’s paper reveals that this might not be the case.

Sorting Supernovae: The Importance of Hydrogen

Superluminous supernovae (SLSNe for short) are pretty recent discoveries, so their origins are currently unknown. Like other supernovae, SLSNe seem to come in different flavors, and we sort them by their observational properties. Right now, there are two kinds of superluminous supernovae: those with hydrogen and those (seemingly) without. It’s unclear how either of these types goes boom, but their origins are probably different. Some SLSNe lacking hydrogen actually look a lot like “normal” core-collapse supernovae. These are called “Type R” SLSNe. Normal core-collpase supernovae have explosions which dim according to the radioactive decay of nickel; Type R SLSNe follow a similar dimming trend, but their brightness implies that the stars were 100 times larger than our own Sun! These massive types of stars are the dinosaurs of the stellar world known as Population III stars. Their explosions would be similar to some of the earliest supernovae in the universe which substantially influenced the amount of heavier elements today. In contrast to these possibly ancient origins, SLSNe with hydrogen might be younger, massive stars with hydrogen layers that have recently been coughed up. This hydrogen smoke screen causes narrow hydrogen emission lines in the SLSNe spectra, similar to those seen in Type IIn supernovae.

In addition to using the supernovae spectra to understand these explosions, we can use their neighborhoods or their so-called “host galaxies.” Both the type of the galaxy and the supernova’s location within a galaxy can tell astronomers important information about the supernova’s local environment. For example, extremely massive stars are more likely to reside in luminous blue star-forming regions—so it makes sense for explosions from massive stars to predominantly occur in bright regions of a galaxy, as is the case for some gamma ray bursts.

The authors of today’s paper use the famous Hubble Space Telescope to inspect the homes of 21 superluminous supernovae (with and without hydrogen). Surprisingly, these monstrous explosions don’t live in the luxurious, bright host galaxies we might expect; they’re actually pretty small and dim! You can see how these host galaxies compare to the homes of other supernovae in the figure below. 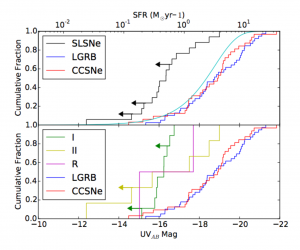 The upper panel of this figure shows the cumulative distribution of UV luminosities for host galaxies of SLSNe (black) , a type of gamma ray burst associated with massive stars (blue) and normal core-collapse supernovae (red). The teal line shows a theoretical distribution for “typical” galaxies. SLSNe hosts are clearly dimmer than other hosts. The lower panel splits the SLSNe into those without hydrogen (“I” and “R”) and those with hydrogen (“II”). The luminosity scatter is much larger for SLSNe with hydrogen.

Not only are the hosts faint, but the two types of SLSNe (those with and without hydrogen) actually have fairly distinct types of galactic hosts: SLSNe without hydrogen live in galaxies that are all about the same brightness, being notably dimmer than those of SLSNe with hydrogen. The authors argue that this might imply that SLSNe without hydrogen have less heavy elements than we typically see; astronomers call this being “metal poor.” Being metal poor is a characteristic of Population III stars, which we’ve previously mentioned as possible SLSNe culprits.

On the other hand, the homes of SLSNe with hydrogen have a very large scatter in brightness, spanning about three orders of magnitude. This implies that SLSNe with hydrogen can occur in a wide range of galaxies, and we probably need to zoom into a few to have a better look at the local properties. Taking all of this together, it seems that SLSNe with and without hydrogen are in fact from two different kinds of stars or environments.

The fact that these galaxies are so small and dim was a surprise to the authors; earlier studies based on spectroscopic data found that SLSNe hosts shouldn’t actually be metal poor, and therefore, they should be brighter. With such a small sample, this could be a statistical fluke, or it might be a hint that superluminous supernovae form in extreme environments. In either case, it’s clear that we still have a big chunk of superluminous supernovae neighborhoods left to explore.