The Chambliss Astronomy Achievement Student Awards are given out at each AAS meeting to both undergraduate and graduate students who present a poster. I spoke with a few of the Chambliss competition participants at the 228th AAS meeting in San Diego about their research: 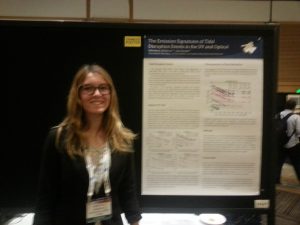 The Emission Signatures of Tidal Disruption
Events in the UV and Optical (Valentina Hallefors et al. 2016)

Valentina Hallefors, from Santa Barbara City College, studies tidal disruption events (or TDEs). TDEs occur when a star passes too close to a nearby supermassive black hole and is partially torn apart by the black hole’s immense tidal forces. Hallefors studies these mysterious events in the UV, hoping to constrain basic properties such as the luminosities and temperatures of the emission. Very little is known about TDEs, and Hallefors work contributes to the overwhelming need for multiwavelength observations of these fascinating events. 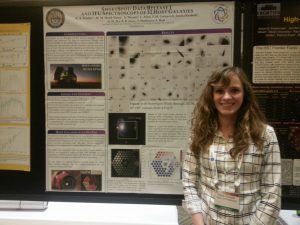 Kara Ann Ponder from the University of Pittsburgh is using the near infrared to study Type Ia supernovae (famous for being cosmological standard candles). Using a specialized spectrograph, she is able take spectra at different locations of a supernova’s host galaxy to better understand the ages and properties of stars surrounding the supernova progenitor. 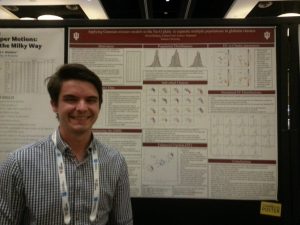 Owen M. Boberg from Indiana University is applying new statistical tricks to classify old stars. He uses Gaussian mixture models to determine which stars in a given globular cluster are first or second generation stars based on their metal content. Having better constraints on these classifications can help astronomers to untangle the history of the cluster and how this history is tied to a cluster’s physical properties. 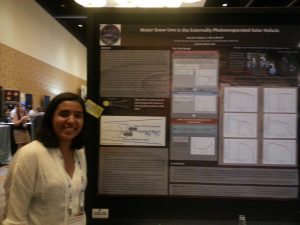 Determining the Location of the Water
Snowline in an Externally-Photoevaporated Solar
Nebula (Anusha Kalyaan et al. 2016)

Inspired by recent observations from the Atacama Large Millimeter Array, Anusha Kalyaan from Arizona State University studies the effects of a nearby massive star on a protoplanetary disk (the birthplace of planets). Specifically, she argues that a second star can shift the snowline farther away from the primary star and dehydrate the disk by removing water though evaporation. Her work highlights the complexity of planetary formation from even the earliest stages.