Title: The subgiant HR 7322 as an asteroseismic benchmark star

Status: [Open access on arXiv], Accepted for publication in MNRAS

We are currently living in the era of big data astronomy; and especially so in the field of asteroseismology – the study of stellar properties through measuring their pulsations. Between the recent Kepler, K2 and TESS missions, as well as supplementary data from Gaia, ensemble studies are often the norm, studying population effects of many stars in tandem. However in this era of large data sets it is important to continue to calibrate our methods, and this is where detailed studies of single, ‘benchmark’ stars are still very important.

The authors of today’s paper set out to study such a benchmark star, HR 7322 in great detail, using multiple complementary methods, with the intention of using the measured parameters of this star to identify problems with asteroseismic theory. The star they picked was a subgiant — a star that has burned through all the hydrogen in its core and is on its way to become a red giant.  Recent results have shown a disagreement between radii of subgiant stars calculated from Gaia mission data and those calculated using asteroseismology. The authors study  this subgiant to great precision in order to identify the source of this disagreement.

In order to get accurate measurements of this star, and to probe any issues in the asteroseismic theory, the authors take a multi-faceted approach. They make detailed asteroseismic measurements of the oscillation frequencies using Kepler data, as well as spectroscopic measurements using the SONG telescope, and interferometric measurements using the PAVO instrument on the CHARA array. Some of these techniques measure  the same stellar properties, which allows for comparison between different instruments. Spectroscopy, for example, finds an effective temperature, which, when combined with interferometry and Gaia data, provides a radius and a separate measure of temperature. Using one of these measures of temperature, asteroseismology provides a radius. The back-and-forth relation between these parameters can be seen in Figure 1. 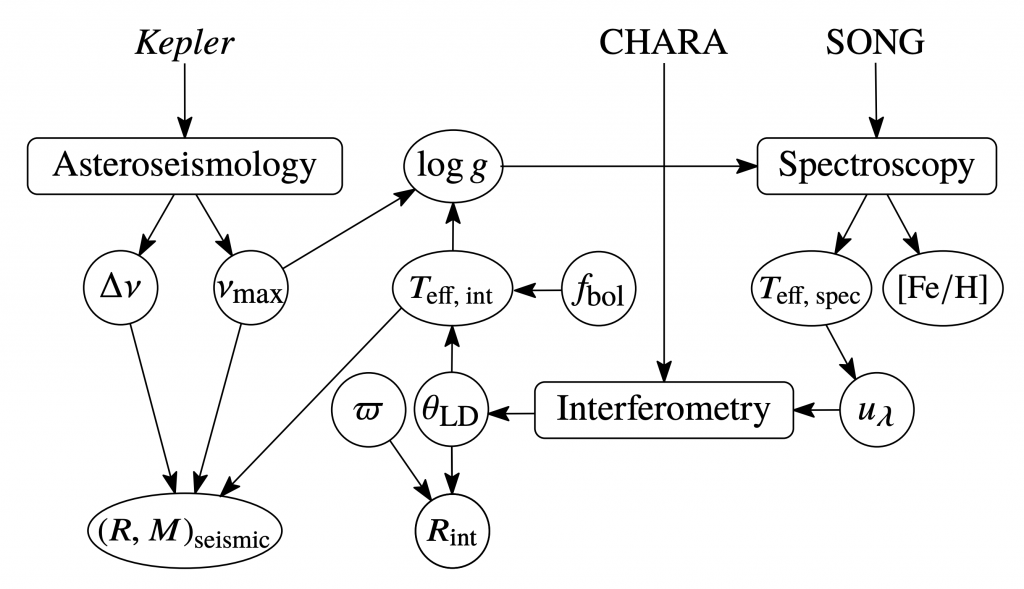 Figure 1: The relationship between different parameters estimated using different methods. From left to right: Δν and νmax are global asteroseismic parameters, log(g) is the surface gravity, Teff,int and Teffspec are temperatures from different methods, fbol is the bolometric flux, ϖ is the parallax, R and M represent radii and masses, [Fe/H] is the metallicity, and θLD and uλ are limb darkening parameters used to calculate the interferometric temperature. [Figure 1 in paper]

Does this agree with the more complex stellar models?

Asteroseismic scaling relations can only get us so far, and if the quality of the data allows for it, the best asteroseismic stellar properties are derived from comparisons to stellar models. As seen in Figure 2, this star shows a rich selection of oscillations. The exact frequencies of these oscillations are components of stellar models, and so comparing these locations to those predicted by the theory gives a very clear understanding of the properties of the star, down to its internal physics. Besides comparing these asteroseismic oscillations to the models, the authors also include the spectroscopic metallicity (content of elements other than Helium and Hydrogen) and the interferometric temperature, bringing all three measurements together in a single comparison.

Figure 2: The oscillation spectrum and best fitting model for the measured peaks. In grey is a subsection of the full oscillation spectrum for this subgiant. In black is this same spectrum after being smoothed. In red is the fitted spectrum from the ‘peak-bagging’ procedure used to measure the precise frequency locations of the peaks. The symbols above indicate what type of oscillation each peak represents, where l=0,1,2 represent radial, dipole and quadrupole modes respectively. [Figure 4 in paper]

The authors take a grid-modelling approach, where they vary various components of the star in the stellar models (such as mass and radius) and internal physics (such as the degree to which the different layers in the star mix with one another). Placing our measurements on these grids lets us figure out what these properties are likely to be for our star. In this case the subgiant status of HR 7322 is a huge benefit— its evolved status means that some oscillation frequencies deviate from their expected location due to the changing interior of the star (also referred to as avoided crossings), letting us get a clear picture of exactly how evolved this star is.

Interestingly, results from the stellar models finds a lower radius and lower mass than those that were calculated using interferometry, spectroscopy, and asteroseismology. But there are a few important takeaways: the asteroseismic radii that correct the scaling relations for subgiants find radii closer to those from stellar models, and reducing the parameter describing the degree of mixing between internal layers of the star so that it was lower than the Sun also improved the estimations. They check this change in mixing against 3D hydrodynamical simulations, which support this outcome for a star of this type and with similar stellar properties.

Studying this single target has revealed some interesting things which otherwise might have been overlooked — it shows that the scaling relations do seem to apply well to subgiant stars (possibly since Gaia DR2 has superseded Gaia DR1, on which the original work was based), validated previous studies on asteroseismic theory, and confirmed agreement between different measurements of radius for a subgiant star. With the TESS mission half way through its nominal run, many asteroseismic measurements of new subgiant stars are expected. When it comes to ensemble studies of these stars, this benchmark star HR 7322 will have provided useful lessons to take into account.

Oliver just started a postdoc at ESA ESTEC in the Netherlands, after completing a PhD at the University of Birmingham, UK. His research focuses on asteroseismology, the study of stellar pulsations, and what it can tell us about stellar populations. When not doing research he enjoys playing piano, walking, and not moving from the sofa all weekend with a good book, show, or game.