Our galaxy is embedded in a cloud of dark matter, thought to consist of tiny particles traveling along orbits through the halo. These dark matter particles permeate all regions of the galaxy, extending far beyond the edge of the bright central spiral, but also orbiting through our solar system, and even passing right through the Earth. This is why scientists build giant detectors, hoping to trap some of these dark matter particles as they pass by. So far, these experiments have not detected dark matter, but that lack of detection is actually quite interesting. Finding out what dark matter is not, thereby narrowing down the possibilities, is an important step towards revealing the true nature of these mysterious particles.

In order to really understand what it means when a detecter does not see dark matter, it is important to have a clear prediction for how much dark matter should be detected. For example, if we expect very few dark matter particles to pass through the Earth in a given amount of time, then maybe the lack of detections over a few years doesn’t actually mean those particles don’t exist. One essential piece of information in this prediction is the velocity of dark matter particles as they orbit past our solar system.

So, how can we determine the speed of these particles that we haven’t even directly detected? Well, lets look back at where these particles actually come from. Dark matter halos grow over time by consuming other dark matter halos. This process is called hierarchical structure formation. The Milky Way is continuously pulling in smaller galaxies and then tearing them apart, thoroughly mixing their stars and dark matter particles into the Milky Way halo (Figure 1). 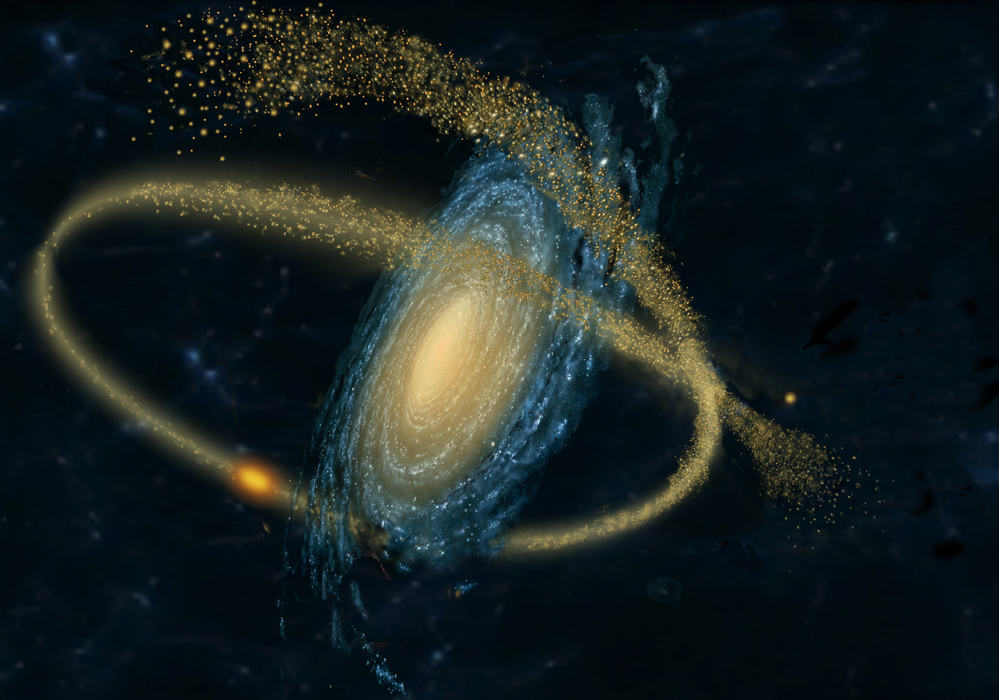 Figure 1. This illustration shows a small galaxy being torn apart as it is consumed by a larger galaxy, like the Milky Way. Gradually, the stars and dark matter that belong to the smaller galaxy are mixed into the Milky Way halo. (Source: Jon Lomberg)

This understanding of the origin of these particles reveals an important piece of information – when dark matter particles join the Milky Way, they are often accompanied by stars. This is great news, because stars, unlike dark matter particles, are not invisible, and we can directly measure their velocities. If we can confirm that dark matter particles tend to move at similar velocities to their stellar companions, then this problem of determining the local dark matter velocity is much simpler! Finding out if this is in fact the case is exactly the goal of today’s paper.

The tricky thing here is that the Milky Way is continuously forming new stars, so the authors need to find a way to distinguish between the stars formed within the Milky Way and stars that formed in smaller galaxies and were then consumed by the Milky Way along with the corresponding dark matter. This turns out to be fairly straightforward – stars that form in smaller galaxies tend to have a different chemical composition than stars that are currently being formed in the Milky Way. This is because Milky Way stars are forming from materials that have been enriched with heavier elements by generations of star formation, while the stars in smaller galaxies are not. The stars we are interested in are therefore what astronomers call “metal-poor.” The prediction is therefore that metal-poor stars and dark matter particles should have similar velocities. 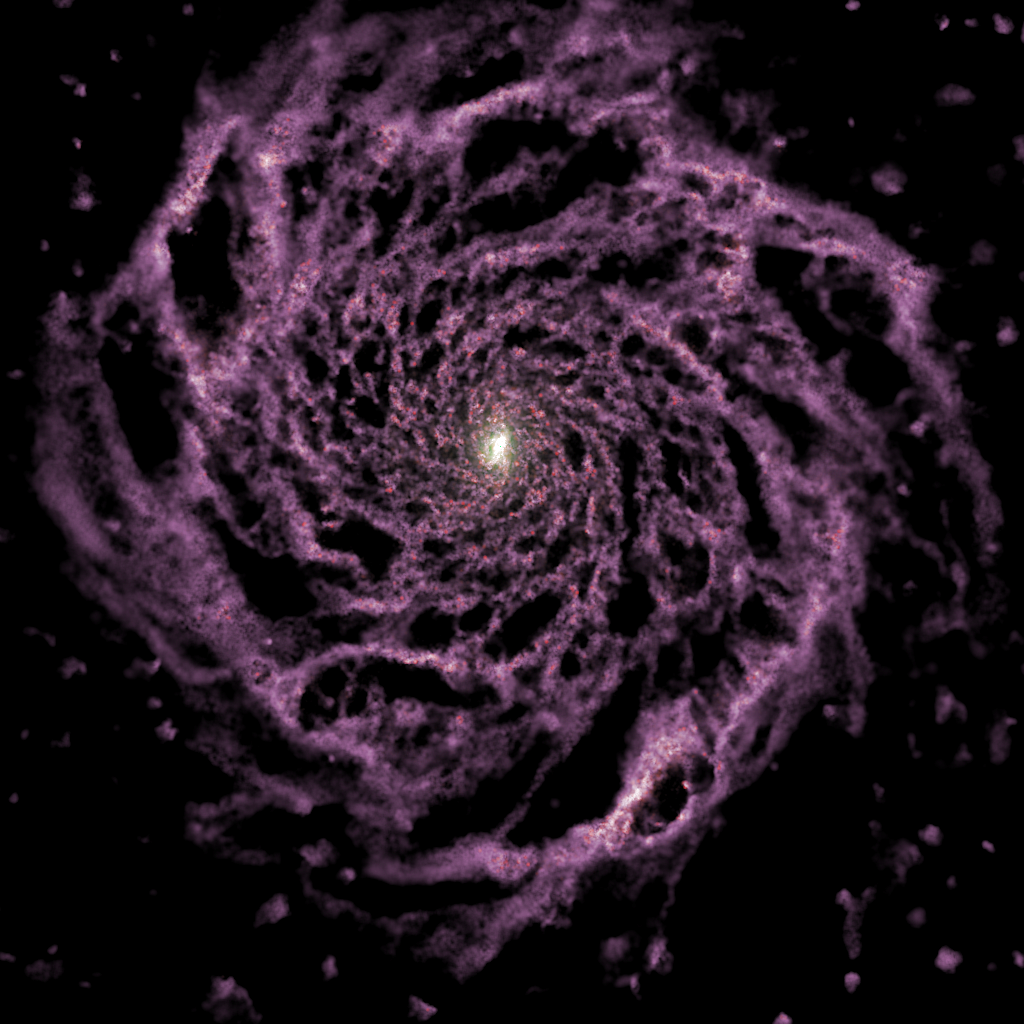 The authors use simulations of Milky Way-like galaxies (Figure 2) to compare the velocities of dark matter and stars, and find that this prediction holds up! Figure 3 shows the distributions of velocities for dark matter and different stellar populations. The black histogram is dark matter, the cyan histogram is all stars, and the orange histogram is only metal-poor stars. The black and orange histograms line up pretty well, meaning the velocity of metal-poor stars does tend to match that of the dark matter. This means that by observing the velocities of these stars near the sun, we can improve our understanding of the dark matter velocity. This will improve our interpretation of the results of dark matter experiments. In particular, based on preliminary calculations, the authors show that the velocity is lower than previously thought. They suggest that this may weaken the significance of non-detections at smaller dark matter particle masses. 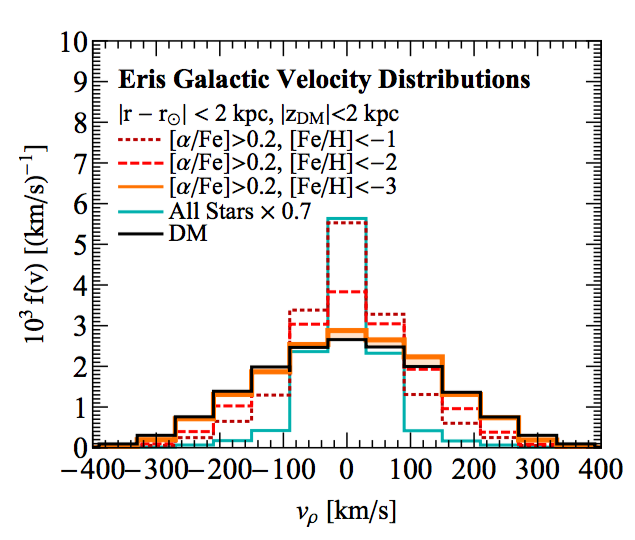 This is a really exciting result. Previous estimates of the dark matter velocity all came from simulations and theoretical predictions, so this new method, which uses observations of our actual galaxy, rather than a simplified model, should really improve the accuracy of these calculations. Furthermore, current experiments like Gaia are greatly improving our understanding of the local stellar velocity distribution, which will continue to increase the power of this method to determine the local dark matter velocity.