Title: First constraints on Fuzzy Dark Matter from the dynamics of stellar streams in the Milky Way

Status: prepared for submission to JCAP, open access on arXiv

It is often said that people fear what they do not understand. In astrophysics, there are many things we do not understand, and perhaps, at least subconsciously, we begin to fear them. Take Dark Matter: it makes up roughly 80% of the mass in the Universe, and our humble galactic home, the Milky Way, is surrounded by a Dark Matter Halo that is likely over 10 times as massive as all of the stars, planets, dust, and gas in the galaxy combined. Yet we still have no clue what it really is, or what kind of particles it is made of. Ostensibly, we call it ‘Dark’ because we cannot see it, but there is no escaping the fact that the name gives off a creepy, sinister vibe.

However, as astrophysicists, it is our job to conquer our fears and study this mysterious entity. And what better way to face our fear than to give it funny names? Cue a long list of adjectives and acronyms that have been used to describe Dark Matter: cold, warm, hot, sticky, self-interacting, WIMPs, MACHOs, and the list goes on. The topic of today’s paper involves a particularly friendly sounding version: Fuzzy Dark Matter. 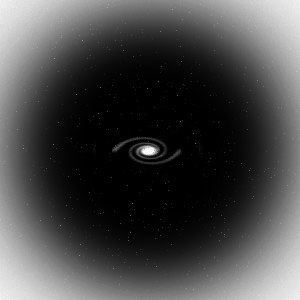 Figure 1. Sketch of a spiral galaxy like the Milky Way embedded in a much larger Dark Matter halo (credit: Jose Wudka).

Hang on! Most people I know have settled on Cold Dark Matter — why do we need this new Fuzzy theory?

Cold Dark Matter (CDM) is indeed the most commonly discussed Dark Matter (DM) candidate, and is an essential part of the most widely accepted model for our Universe: Lambda CDM (the Lambda stands for the Cosmological Constant associated with Dark Energy—another sinister astrophysical unknown). The reason it is so favored within the Astrophysics community is because it does a very good job explaining a broad set of observations and phenomena, especially on large scales (>10 kiloparsecs—think galaxy-scale or bigger).

But it’s not all roses for CDM proponents. While on large scales it has been very successful, when you zoom in to smaller scales, several problems pop up. Simulations of CDM halos expose two important tensions between CDM theory and observations: 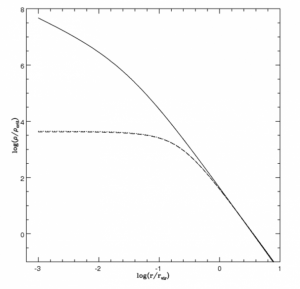 Figure 2. Comparison of a cusp (solid) and core (dashed) density profiles. The cuspy profile becomes increasingly dense towards the middle of the halo, while the core’s density remains constant within a certain radius. Observations favor the core over the cusp (source: Popolo, 2008).

On top of these observational tensions, there is also the broader issue that we have yet to detect the CDM particle, despite direct and indirect detection experiments that have been ongoing for the past couple of decades. Without a confirmed detection of a CDM particle, theorists continue to come up with—and test—alternative DM candidates that may alleviate some of the observational tensions discussed above. Enter Fuzzy Dark Matter and the authors of today’s paper.

So what is this Fuzzy Dark Matter?

The theory of Fuzzy Dark Matter (FDM) postulates that DM is comprised of tiny particles that are so small that they behave like waves (more specifically, their small mass corresponds to a de Broglie wavelength of ~1 kiloparsec, meaning that even on astronomical scales FDM behaves like a wave, not a particle). And by small mass, we mean really, REALLY small—somewhere around 10^-22 eV (or ~10^-55 grams). In comparison, a single electron has a rest mass of roughly 500,000 eV (or ~10^-27 grams). That is a difference of nearly 30 orders of magnitude! To visualize this difference, consider that if a FDM particle had the mass of a grain of sand, then a single electron would weigh as much as our entire planet. But perhaps the most mind-bending part is that because of their quantum nature, when you put enough of these tiny particles together to create the DM halo of a galaxy like our Milky Way, the whole thing essentially behaves like a three dimensional standing wave of matter! 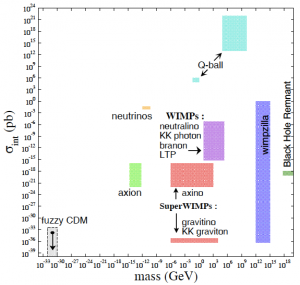 Figure 3. A comparison of the mass and cross section of various DM candidate particles. Fuzzy Dark Matter (labeled fuzzy CDM in this plot) is all the way on the bottom left, separated from WIMPs (the leading candidate for CDM) by over 30 orders of magnitude in mass scale (image credit: HEPAP/AAAC DMSAG Subpanel 2007).

On large scales (>10 kiloparsecs), FDM behaves very similarly to CDM, which is great news because as stated above, CDM does very well at reproducing observational data at those scales. But on smaller scales (think Milky-Way-size galaxies or smaller), the wave nature of FDM leads to several key differences: firstly, thanks to the Heisenberg Uncertainty Principle, FDM cannot cluster too densely at the center of a DM halo, meaning that instead of forming a cusp at the center of a galaxy, FDM forms a core of uniform density! So the core-cusp problem is no longer a problem for FDM. Secondly, and for similar reasons, FDM also suppresses the formation of sub-halos, which alleviates the too-big-to-fail problem.

Today’s authors propose yet another test to compare between the observable effects of CDM and FDM, using thin streams of stars that encircle our galaxy.

From Fuzzy Dark Matter to fuzzy streams of stars

Stellar streams are both very photogenic and very helpful. They are formed when a globular cluster or a small galaxy get torn apart by the tidal gravitational force of a more massive nearby galaxy. In most cases, the stars from the disrupted cluster or galaxy form a long and thin stream that wraps around the disrupting galaxy. Studying the intricate shapes of these streams is a great way to learn more about the galaxy that tore them apart and about the nature of DM.

In theory, if the Milky Way’s halo were made of standard CDM particles like WIMPs, it would include many smaller sub-halos, and if one were to pass near or through a stellar stream, it would essentially punch a hole in it, leaving a gap in the middle of the stream.

But what about a stream in a FDM halo? Because FDM suppresses the formation of smaller sub-halos, encounters between streams and sub-halos would be much less frequent than in the CDM case. Instead, the stream would be constantly bombarded by uniform, relatively smooth waves of FDM. Today’s authors simulate the effects of this bombardment for different masses of FDM particle, and show that at certain masses this causes the streams to puff up through a process called dynamical heating. They demonstrate that over a relatively short timescale, streams in FDM halos should have a somewhat fuzzy appearance themselves (see Figure 4). 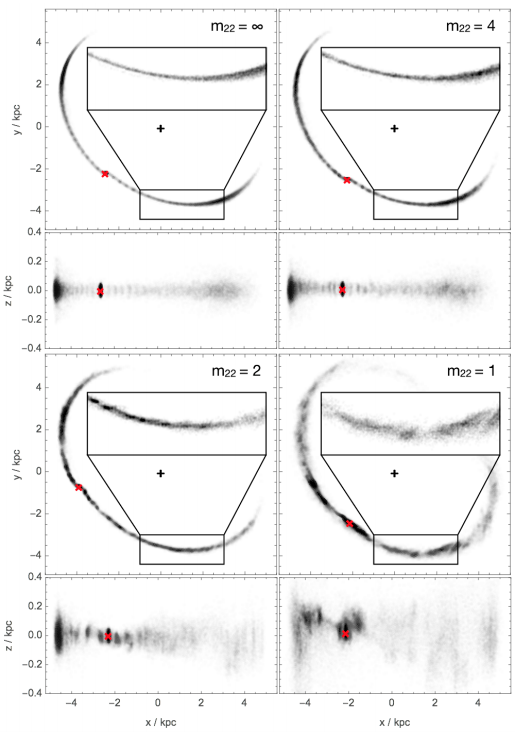 Figure 4. Four simulations from today’s paper of streams embedded in a FDM halo. Each simulation models the evolution of a stream in the presence of FDM particles of a certain mass, as noted on the top right of each panel (m_22 is shorthand for m/10^-22eV, so, for example, m_22=2 is equivalent to a FDM particle with a mass of 2*10^-22 eV). Note how as the mass decreases, the streams become increasingly puffy (figure 2 in the paper).

The interesting part is that we have observed many stellar streams around our galaxy, and they all appear to be quite thin! The authors pick six streams that have been studied extensively in the literature and use their thinness to place constraints on the mass of the FDM particle. By comparing their simulations to the actual width of these six streams, they rule out FDM comprised of particles below 1.5*10^-22 eV with a high degree of confidence (see Figure 5). Previous studies have shown that the FDM particle should be no larger than 10^-21 eV, so if true, this finding would significantly narrow down the possible mass range for a FDM particle.

Figure 5. Constraints on the FDM particle mass from individual streams (panels a-f) and the joint constraint from all six streams combined (panel g). The light and dark regions in each panel correspond to 1- and 2-sigma regions for the likelihood profiles. The red vertical line in panel g corresponds to the lower limit obtained from the 6 streams combined. Note that an upper limit is not evaluated here since other factors besides FDM may also contribute to stream puffiness (figure 5 in the paper).

Unfortunately, designing an experiment that would be sensitive enough to detect such a small particle is still beyond the limits of our scientific capabilities. With that said, today’s paper shows exactly why we should not be disheartened! The clues for figuring out DM are out there, waiting to be uncovered in astronomical structures like stellar streams. Every additional finding like today’s paper gets us a little bit closer to discovering the true nature of this great unknown. After all, we fear what we do not understand, so the best way to conquer those fears—better even than giving them funny names—is to understand them.