Title: The star formation history of the Sagittarius stream

Small satellite galaxies and star clusters orbiting the Milky Way are often torn apart by its gravitational potential, leaving behind trails of stars stretched out across the sky (Figure 1). These stellar streams (more info in this astrobite!) contain information about the history of their parent object and can be studied to learn about the evolution of the Milky Way in an approach referred to as “Galactic Archaeology.” Like archaeologists who study ancient history on Earth, Galactic archaeologists search for present-day remnants of historical events. The spatial structure and the properties of the stars that make up these stellar streams tell a story of the parent object’s evolution and eventual destruction. 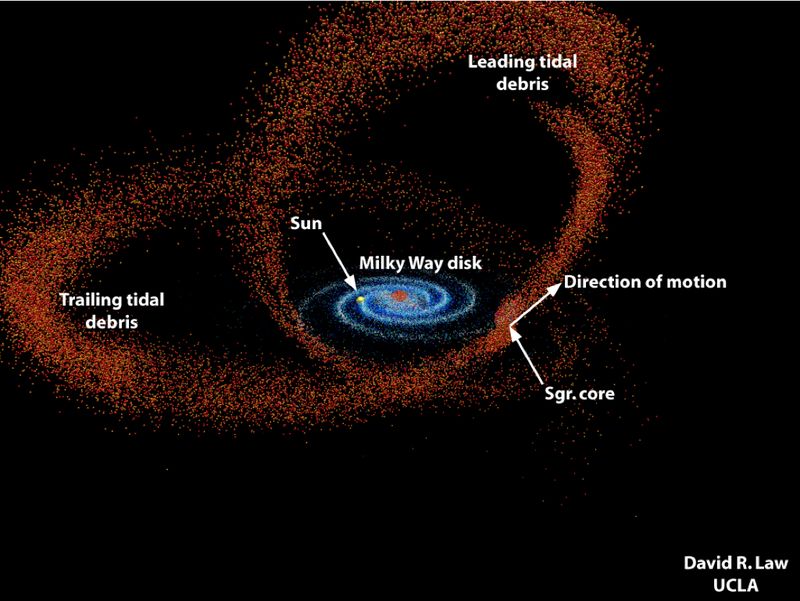 Figure 1. This diagram shows the stream of stars left behind as the Sagittarius dwarf galaxy is torn apart by the gravitational potential of the Milky Way. Long tails extend in either direction from the parent galaxy (labeled Sgr. core), and stretch across the northern and southern skies, wrapping in a full circle around the Milky Way. Source: David R. Law, UCLA

To study the star formation history of a stellar stream, scientists compare data to theoretical models of stellar populations. Stellar evolution is one area of astrophysics that is fairly well understood, so detailed predictions can be made about how stars evolve throughout their lifetime. In particular, stars that form at the same time in the same environment will have the same composition and the same age, but will also have a wide range of masses that will trace out a distinctive curve through stellar brightness and color referred to as an isochrone (meaning equal age). (Figure 2 illustrates several isochrones as a stellar population evolves.) Comparing these isochrones to the observed groups of stars can determine how long ago these stars formed and their approximate composition, and can therefore tell us about how the population of stars and the environment in which they form changes throughout history. 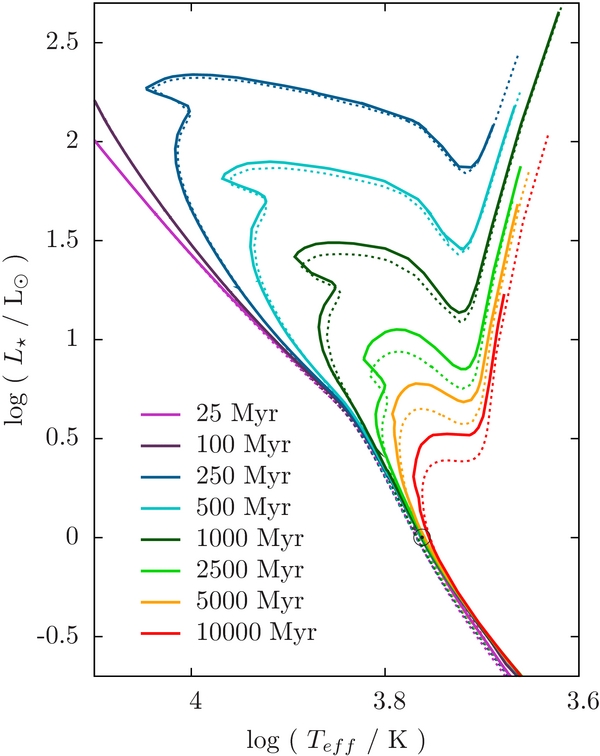 Figure 2. These lines illustrate how a population of stars evolves with time. The y-axis is brightness and the x-axis is temperature which directly corresponds to color. Source: Casanellas et al. 2011

In today’s paper, de Boer and collaborators study the star formation history of different regions of the Sagittarius stream. This stream is the largest and brightest known stream in the Milky Way system, and is the remnant of the Sagittarius dwarf galaxy, one of the largest satellite galaxies orbiting the Milky Way. The authors are especially interested in a region where the stream is split into two – a brighter half and a fainter half. Do these two regions come from the same place? Did they form stars at the same time and in the same environment? And if they are in fact both remnants of the Sagittarius dwarf galaxy, what causes their difference in appearance?

The authors observe stars belonging to the Sagittarius Stream and then determine the model that most accurately describes them. This method reveals the evolution of the stellar composition in the bright and faint regions over time and provides clues to several facts about the ancient history of the stellar stream. (Figure 3 shows the star formation as a function of time in the two regions.)

First, the authors confirm that both parts of the stream do in fact come from the Sagittarius dwarf:

They discover that the stars from both the bright and faint regions follow a tight relation between age and composition, meaning that at any given time the stars being formed had a similar composition and formed in a homogeneous environment. They also find that this relationship is similar to that of stellar clusters known to belong to the Sagittarius dwarf, confirming that both the bright and faint parts of the stream were stripped from the galaxy.

Second, they find evidence of when the destruction of the dwarf began:

Third, they discover differences between the two parts of the stream:

Observations of the stars in the Sagittarius stream were therefore able to provide clues to the history of star formation and the destruction of the Sagittarius dwarf galaxy. They revealed the origin of the Sagittarius stream, how many billions of years ago different parts of the stream were torn apart from their parent galaxy, and how the composition of these stars changed over the 8 billion year history of star formation in the Sagittarius dwarf galaxy. All of this is only the beginning of Galactic Archaeology, an exciting field that involves taking present-day artifacts of stellar systems and revealing secrets of their complex history spanning billions of years.