Fantastic tidal features and where to find them

Title: The Origin of Faint Tidal Features Around Galaxies in the RESOLVE Survey

Status: Accepted for publication in ApJ, open access on arXiv

What has arms, a tail, and a big shell all around it? You may be tempted to say, “a turtle” (or maybe “an unhatched crocodile”?), but an equally reasonable answer, it turns out, is “a galaxy”!

Tidal interactions between a galaxy and the objects in its vicinity lead to the formation of a variety of visually striking structures, often referred to as tidal features (see figure 1 for a few examples). Streams form when a lower-mass companion (such as a globular cluster or a smaller galaxy) orbits a more massive galaxy on a relatively circular orbit and gradually gets ripped apart and stretched out by tidal forces. Shells are the likely results of a dwarf galaxy falling radially into and merging with a bigger galaxy. Tidal arms or tails form when material from the primary galaxy gets pulled out due to an interaction with a nearby large companion, usually as a precursor or a byproduct of a major merger (check out the arms/tails in this cool comparison of simulation and observations).

In addition to providing beautiful material for your desktop background, these tidal interactions can teach us a lot about a whole slew of topics, ranging from star formation history and stellar populations to galaxy evolution and nature of dark matter. So hunting down and understanding these tidal features can be quite an (intellectually) lucrative pursuit!

WTF? (Where are the Tidal Features? Not to be confused with this)

The authors of today’s paper set out to understand how common tidal features are, and which types of galaxies are likely to host them. The sample they studied consists of 1,048 galaxies in the RESOLVE survey (REsolved Spectroscopy Of a Local VolumE), about which we already have a lot of data thanks to other recent surveys including SDSS, 2MASS, GALEX, and ALFALFA.

In order to identify tidal features around these galaxies, the authors supplemented the surveys above with deep images from the DECam (Dark Energy Camera) Legacy Survey. They used a masking technique to block out the central areas of the host galaxy and other bright sources in the image, in order to enhance faint tidal features. They then inspected both the unmasked and the masked images (necessary because in a few cases the masking actually blocks out some of the tidal features) to identify which galaxies host prominent tidal features (see figure 2). Overall, they were able to detect tidal features with high confidence around approximately 17% of the galaxies in the survey. 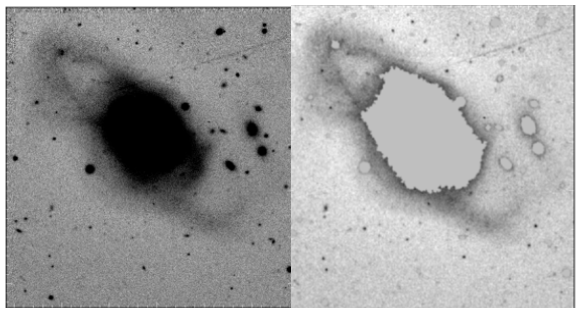 Figure 2. An example of a tidal feature (the prominent darkened ring around the main galaxy) detected with high confidence in both the masked and the unmasked images of the DECam Legacy Survey. Note that while here the tidal feature is clearly visible in both images, in many cases the tidal features were only detected in one of the two images. Figure 25 from the paper’s appendix.

The authors considered a wide range of galaxy characteristics in this effort, including specific star formation rates, the ratio between gas and stellar mass, and the morphology of the host galaxy. They also included several characteristics related to the environment of the host galaxy, such as the halo mass, the distance to its nearest neighboring galaxy, and the number of galaxies in its local group. Of these characteristics, the authors found that the factor with the strongest correlation to the existence of tidal features is the ratio of gas to stellar mass. Separating the surveyed galaxies into a gas-rich and a gas-poor group (with the threshold being a gas-to-stellar mass ratio of 1/10), they showed that ~19% of gas-rich galaxies host tidal features, as opposed to only ~13% of their gas-poor counterparts.

To further strengthen this conclusion, the authors also trained a machine learning method called a Random Forest algorithm to determine which of the galactic parameters are the most important for predicting tidal features. The results are shown in figure 3, and lead to the same conclusion – namely that the gas-to-stellar mass ratio is the most important factor in terms of the likelihood of hosting tidal features. 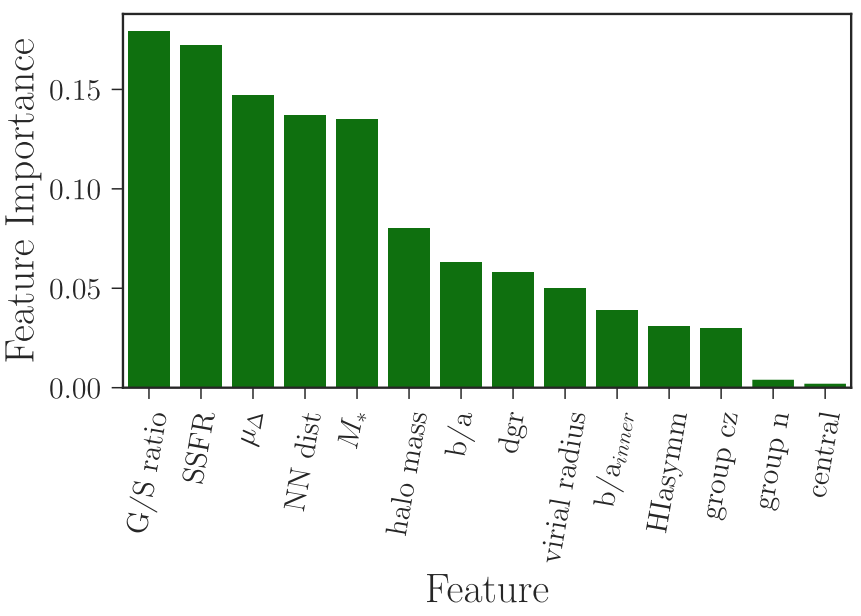 Bigger is better? Not for gas-rich galaxies

Perhaps an even more surprising result from this analysis is that the actual mass of the galaxy and its halo is relatively unimportant, and seemingly unrelated to the formation of tidal features. One might naively assume that the bigger and more massive the galaxy, the more likely it is to interact with and disrupt many other objects in its vicinity, making it more likely to host tidal features. But this turns out not to be the case; the halo mass comes in a distant sixth place in the Random Forest Analysis shown in figure 6.

Understanding where tidal features exist and why they exist in those places is a key to solving many mysteries of galactic physics, and the authors of today’s paper use their results to put forth several hypotheses about the relation between tidal features and the properties of the galaxies that host them. Perhaps equally as impressive, this paper demonstrates the immense potential of combining tidal feature identification with large datasets of galaxy properties from various surveys, in order to draw far-reaching conclusions about the nature of galaxy formation and evolution. This is an exciting time indeed for all of the tidal feature enthusiasts out there!