No need for alien mega-structures around the WTF star

Title: Mysterious eclipses in the light-curve of KIC 8462852: a possible explanation

The WTF star is a bizarre object observed by the Kepler satellite. WTF stands not-so obviously for “Where’s the Flux?”, because this star presents some very steep and odd-shaped dips in flux whose cause remains to be explained. The Kepler mission gives it the official name KIC 8462852, but it is also known as Boyajian’s Star (and formerly as Tabby’s star), referring to its discoverer, Tabetha Boyajian, who gained important insight from the awesome Planet Hunters organization. This star is so polemic it has its own website and even a Kickstarter campaign raising funds to solve its mystery. One of the reasons it got so famous is because its strange features could be explained by an alien structure being built around it, a hypothesis which was seriously discussed by the community and even motivated SETI follow-up which so-far found no evidence of deliberately produced electromagnetic signs. The authors of today’s paper suggest another explanation which fortunately (or sadly?) doesn’t need to invoke aliens.

Being so cool as KIC 8462852 is, it has of course already been featured in previous Astrobites. You can check here and here if you want to catch up. In short, the star itself is a rather common F-type star, which means it is slightly more massive and hotter than the Sun. But its light curve has lots of dips which are asymmetric, different between themselves, and take up to 20% of the star’s flux. This is not what you would expect from a regular planetary transit, which is symmetric, periodic, and doesn’t cause significant fading. So what could be causing these dips? Different hypothesis were raised in the original paper, the most plausible being the passage of a swarm of comets. This hypothesis was further studied by Bodman & Quillen (2016), and they’ve found out that most features could indeed be explained by this scenario. However, there’s at least one deep feature which cannot be caused by the passage of a comet. This flaw in the most promising theory motivated the authors of today’s paper to search for an alternative explanation.

The authors note that this isn’t the first star to present asymmetric dips in its light curve. Another of Kepler’s targets, KIC 12557548, for example, also has such trends (as you can learn about in this bite). Similar dips were identified in a white dwarf star as well, WD 1145+017 (as this bite discusses). In both cases, the explanation is a disintegrating planet around the star, so that the dimming is not caused by the planet itself, but by the dust cloud surrounding it, which develops into a comet-like dusty tail that causes the asymmetric dimming. Considering that, the authors of today’s paper aim to investigate whether the main features in KIC 8462852’s light curve can be explained in a similar way, using only massive bodies surrounded by dust clouds.

They assume the dust clouds are composed of thousands of massless dust particles with the size of a few microns each. They initially reside within the gravity well of their parent massive body. Three different scenarios are considered from there: (A) all dust particles are initially on eccentric orbits around the massive body and are released simultaneously from the pericenter; (B) similar to (A), but the particles are not released simultaneously; (C) dust particles form an initially planar, ring-like structure around the parent body. Scenario (A) could be interpreted as a spherical shell caused by some sort of eruption on the massive body. Model (B) resembles a dusty envelope or maybe a thick atmosphere. The scenario (C) would occur if the dust cloud had angular momentum when formed, making it get concentrated on a disk. The motion of the clouds is followed during one periastron passage, and their effect on the light curve is calculated throughout the passage. They considered four of such clouds, attempting to explain the four main events on KIC 12557548’s light curve, illustrated on Fig. 1. 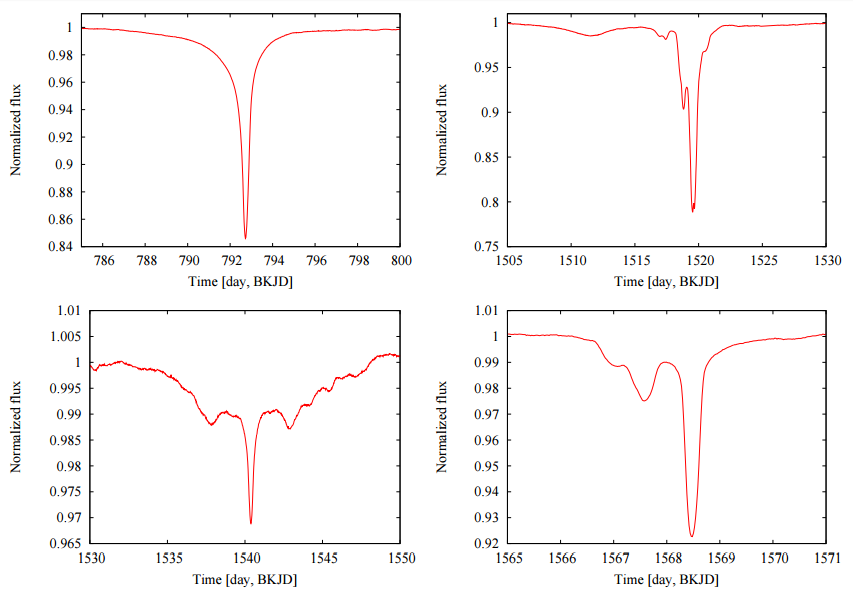 Figure 1: Four main eclipses in the light curve of KIC 8462852, which the authors attempted to model. The normalized flux is shown as a function of  the Barycentric Kepler Julian Date (BKJD), which is shifted from the standard Barycentric Julian Date. (Figure 1 in the paper.)

As the authors tried to keep the free parameters to a minimum, no good quantitative match between their model and the observed light curve was achieved. However, they reach surprisingly good morphological agreement, as you can see on Fig. 2. The feature at 800 days, which could not be explained by the comet hypothesis, appears naturally in their models, because the dust cloud shrinks as it approaches the periastron, creating a leading tail. Same goes for the three other features. All of them can be explained by a model of type A, but the authors stress that a model of type B fits even better the feature at 800 days, while the feature at 1540 is best explained by a model of type C. Moreover, all the four clouds used to explain these features have very similar initial orbital parameters, meaning they could all have a common origin. 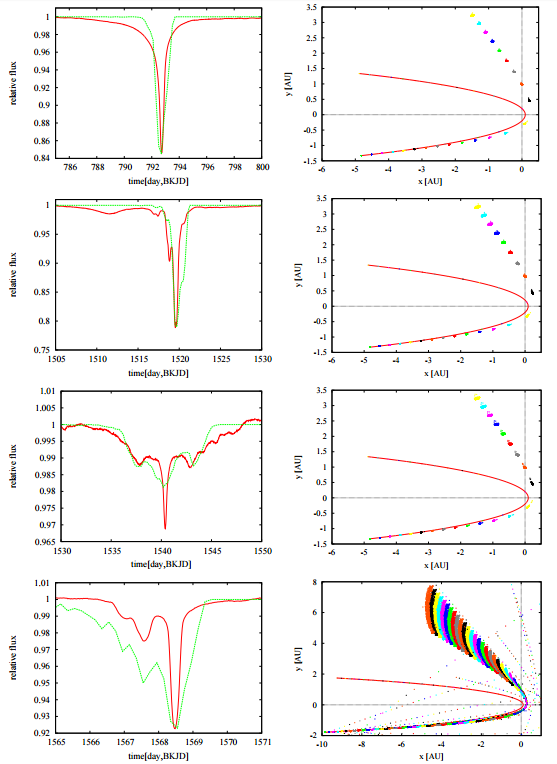 Figure 2: Comparison of the observed light curve for the four main events with model (A). Each row corresponds to one event. The left column shows the observation in red and the model in green. Morphological agreement is obtained. The right column shows the evolution of the dust particles (dots) as the parent body (solid line) orbits the star. The different colors represent the dust particles at different times separated by 25-day intervals. Some particles are thrown into chaotic orbits after close encounters. (Figure 5 in the paper.)

This models still needs improvement, especially to achieve better quantitative agreement and explain other features. Of special concern is the fact that no infrared excess was detected from KIC 8462852, as is usually produced by dust clouds. The authors argue that this is expected if the clouds are at a highly eccentric orbit, which is the same argument used in the comet scenario. The recent finding that KIC 8462852’s faded by about 3% during the Kepler mission also appears to be easily explained, since the debris associated with the massive objects can spread and extend along the orbit, causing the fading. The authors have thus proved that a rather simple model can explain this peculiar object, helping point more detailed studies in the right direction. For the disappointment of some and joy of others, it appears that it wasn’t this time that aliens have shown us their colors.