You have probably heard a million times about how strong the gravitational pull of black holes can be. What you might not know is that less than 5 % of stars are massive enough to end up as black holes. The majority of stars, including our Sun, will become white dwarf stars. They are not as popular as black holes, but you can still learn lots of things from them (e.g. bite1, bite2). They are not as heavy as well: a tea-spoon of white dwarf weighs only about 1 ton, compared to a teaspoon of black hole which would weight about the same as the Earth. That means that white dwarfs, despite not “falling into themselves” as black holes, still tend to pull things to their central region. Because of that, we usually only detect hydrogen and/or helium in the atmosphere of white dwarfs; all the heavier stuff, which astronomers call metals for short, has fallen into the core. This process is known as gravitational settling. However, as other bites already discussed (bite3, bite4), we detect traces of metals in lots of white dwarfs. The only explanation, considering that these elements should quickly fall to the unobservable core, is that something is feeding the white dwarf with metals. But what? The authors of today’s paper observed what might be the answer.

With the advent of large spectroscopic surveys with reasonable spectroscopic resolution such as SDSS, it became clear that between 25 and 50 % of white dwarfs contain metals in their atmospheres. It was also noted that the abundance ratios of such elements in the atmosphere of white dwarfs are very similar to what one measures in rocky bodies in the Solar System, such as asteroids and minor planets. Summing this to the fact that about 4 % of white dwarfs have warm debris disks around them, one can infer that rocky debris from the planetary system which orbited the white dwarf progenitor can pollute the white dwarf’s atmosphere. This theory was largely accepted by the community; the problem was that such process of disrupting planetary material had not been observed so far.

What did they actually spot?

The authors analyzed data from the NASA’s Kepler Space Telescope of the white dwarf WD 1145+017 (also known as EPIC 201563164), which is a helium-envelope white dwarf. They noted that the brightness of the star dimmed every 4.5 hours by up to 40 %, in a way consistent with a transit event. The depth and shape of the transit varied significantly over the 80 days of data. Using Fourier analysis, they found other five less evident, but still statistically significant, signals with periods between 4.5 and 5 hours. To confirm the detection, they made follow-up observations with ground-based telescopes. 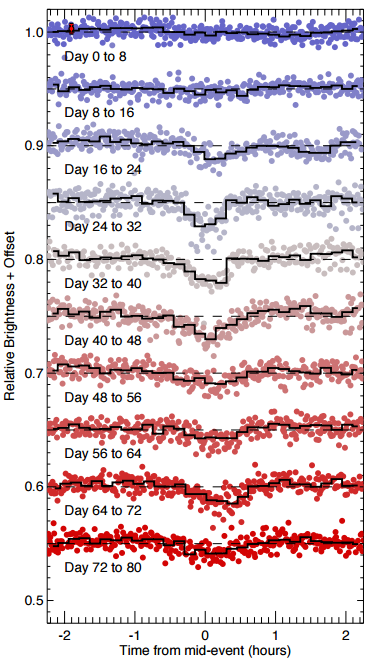 Figure 1: The light curve obtained by Kepler folded on the 4.5 hour period. Various transit events can be seen, with varying shapes and sizes.

In these observations, they detected two transits separated by the dominant period of 4.5 hours. However, they didn’t occur when the authors expected; instead, they were largely shifted in time in addition to the 4.5 hour period. The duration of these new transits was also not consistent with a solid body transiting the white dwarf. Still, their depth and morphology cannot be explained by stellar pulsations. A background eclipsing binary was also ruled out.

Besides the photometric data, the authors also made spectroscopic observations, both to measure radial velocity to probe the existence of planets around the white dwarf, and to search for heavier elements. They excluded the existence of companions larger than 10 Jupiter masses and detected signs of metals such as magnesium, aluminium, and iron in the white dwarf’s atmosphere. As the settling times of these elements are much shorter than the age of the white dwarf, they must have been deposited there recently, in the last million years.

And what does it mean?

The authors interpreted their observations as evidence for at least one, and likely six or more, disintegrating planetesimals orbiting the white dwarf. Transits by disintegrating planets have already been observed in main sequence stars, and look pretty much like the events seen in this white dwarf. Curiously, the solid bodies themselves are too small to be detected, so the transits are actually caused by the much larger dust cloud trailing them. As its density is variable, it causes the detected asymmetric transit shapes. So each of the observed periodicities would be caused by one of these clouds originated from rocky bodies orbiting near the white dwarf.

These rocky bodies are probably the leftovers from the progenitor stellar system before the star evolved. Simulations made by the authors proved that a configuration of six planetesimals in circular orbits with the measured periods is stable for at least a million orbits. The problem is how did they get so close to the star without being completely disrupted. The large shift between the transits with a 4.5 hour period also remains unexplained. So it’s still uncertain if the authors’ interpretation is correct. Their observations are completely consistent with it, but they cannot rule out other explanations for the observations, such as small rings or debris clouds in a disk crossing in front of the star. As usual, more observations are needed to constrain the scenarios — which means that, luckily, there’s still work to do!