Disclaimer: The first author of the article is a former Astrobites author.

KIC 8462852, also know as Tabby’s star or the WTF star, sure is one of the most intriguing encounters by Kepler. In 2015, astronomers discovered that its brightness displayed variations that could not be elegantly explained by simple stellar evolution or transiting planets, and so confusion ensued. Some have even appealed to the alien hypothesis. Today’s article suggests that Tabby’s star may actually have a previously undetected long-term variation, adding another fuzzy piece to this already messy puzzle.

Unless your computer screen was blocked by a cloud of cometary dust during the last few months, you probably read about Tabby’s star on the internet. It is one of the targets of the Planet Hunters program of citizen science, which found that KIC 8462852 displayed irregular dips of up to 20% in its brightness, and that these do not quite match with physical models of exoplanet transits or plain old stellar evolution. Tabetha Boyajian and collaborators proposed that the best explanation would be the transit of about 100 comets, but some other hypotheses are almost as good as the comet idea, leaving us completely stumped.

Some time later, another article was published claiming a steady and subtle dimming in the star’s brightness based on data from old photographic plates, but the evidence was proven to be shaky at best. Following up on this, the authors of today’s article, Benjamin Montet and Joshua Simon, entertain the idea of a long-term variability by taking a more careful look at data from Kepler itself.

Riddles in the dark

The data processing for Kepler data is not suitable for studying long-term variability, because it treats any low-frequency signals as telescope movement, and completely removes these. To make matters worse, Kepler’s optics cause the star to have a non-symmetric shape in the raw images, which in turn makes it more difficult to extract information about the brightness of a star. Thus, the authors had to get their hands dirty with non-standard data processing techniques to get the long-term information they needed. And what they found is that the star seems to be fading over the course of about 4 years (see Fig. 1). 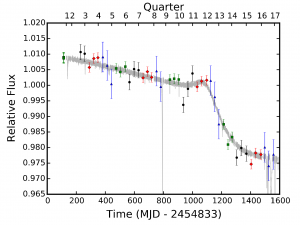 Figure 1. Light curve of KIC 8462852 during the Kepler mission. The dips detected by Boyajian et al. (2016) are seen as very deep and short signals at (e.g., at ~150 and ~800 days in the x-axis) compared to the overall dimming of the star claimed by Montet & Simon. The colored symbols represent different imaging channels.

These results point out 3 clear long-term trends in the light curve of Tabby’s star: first a steady dimming of about 0.34% per year (from 0 to ~900 days in the x-axis in Fig. 1), followed by a more rapid fade of ~3.4% per year (from 1100 to 1250 days) and finally an apparent flattening of the brightness thereafter.

How confident should we be?

Naturally, these claims are only as strong as the evidence that supports them. One of the tests they perform is a comparison with other Kepler stars: if the trends are systematic to the instruments, then all other targets observed in similar conditions should display these long-term variations — for example, if the detector becomes less sensitive with time then all the nearby stars would be expected to fade by the same amount. They apply the same data processing to 8 similar Kepler stars (see Fig. 2) and another 192 stars in the same detector and find no evidence of such variation in them. Moreover, stars of the same type as Tabby’s do not normally display this behavior. The authors also rule out instrumental effects and background contamination. 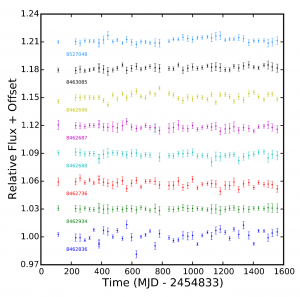 Figure 2. The light curves of 8 other Kepler stars do not display the long-term variability seen on Tabby’s star

What could explain this fading of Tabby’s star over the 4 years of Kepler’s main mission? The obvious first guess would be transiting material: the authors suggest that complex scenarios involving collisions producing a cloud with increasing density could cause such dimming, which is similar to Tabetha’s hypothesis on the discovery paper. Another proposal they make is the presence of a polar star spot, although with the caveats of requiring special conditions (e.g., a binary companion) and not fully explaining the short-term variations seen by Boyajian and collaborators.

The take home conclusion from this article should be that we need more data in order to nail down what causes the apparent behavior of the WTF star. A precise analysis of the starlight in different colors could help to identify the source of the dimming, and radial velocity measurements could help uncover an unseen binary companion. Boyajian and her team recently were successful in funding their Kickstarter project to further study Tabby’s star, so we are definitely looking forward to the next results.