Since the discovery of planets around other stars in 1992, our catalogue of exoplanets has grown to an astonishing 3,506 confirmed planets.  Thanks to great advances in both space and ground-based observatories, parallels to our own solar system are being uncovered at an ever-increasing rate. Despite this, we are still struggling to find evidence of minor bodies like moons, asteroids, and comets around other stars. 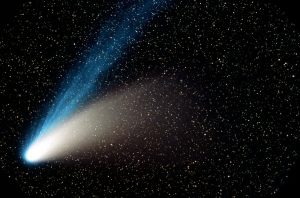 Figure 1: An image of Comet Hale Bopp – observed from Earth. A comet has two tails clearly visible here: a blue ion tail which always travels away from the Sun and a dusty tail of debris left behind as the comet travels. Image credit: Dan Schechter

Today’s bite explores the first likely Kepler detection of something that may have played a role in the formation of life here on Earth – an exocomet!

The path to odd data

For the last 8 years, Kepler has stared at the stars and exoplanets have waved back, producing an ever increasing directory of stellar brightness as a function of time. With such a huge catalogue of data, big missions like Kepler have algorithms designed to search and highlight features of interest such as the characteristic dip of a transiting exoplanet. Once all of the exciting planetary candidates have been removed, we are left with a collection of oddities that have no clear explanation – these are the signals the authors selected for further investigation. 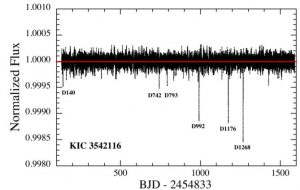 During visual inspection, the light curve of KIC 3542116, a F2-type star, was found to have three asymmetric, transit-like features with easy-to-spot depths of 0.1% over a period of 1 day (see figure 2). Further inspection revealed three dips of a similar shape hidden within the Kepler data that was hidden by stellar variability. The resulting data is shown below in figures 3 and 4.

Figure 4: Brightness as a function of time for the three shallower dips – D140, D742 and D793. Note that the brightness axis has been scaled by a factor of two here compared to figure 2. Figure 4 in the paper.

When comparing the light curves in figures 3 and 4, their shapes are strikingly similar. All transits start with a steep slope of positive curvature, followed by a slower transition back to full brightness with negative curvature. Such similarities led to authors to provisionally label these events as comet transits, caused by comet trails travelling across the disk of the star.

To determine whether the dips are astrophysical in nature — opposed to some instrumental defect — and occur in the right location, the team completed several tests.

This data set passed all tests with flying colours, suggesting it is astrophysical and originating from KIC 3542116.

On to the model!

Rolling with the comet transit theme, the authors turned to simple models to determine the velocity of the comets and infer the amount of cometary dust present. To do this, a model of starlight extinction is utilised alongside, what is likely to be, everyone’s favourite tool – a Markov Chain Monte Carlo (MCMC) code. MCMC routines are great for inferring a model fit for a set of data (see this fantastic astrobite here for implementing MCMC code). 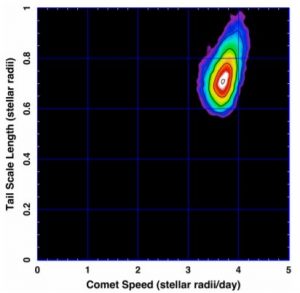 Figure 5: Likelihood plots of comet speeds and the length of the comet tail. The most likely parameters are in the central region, highlighted by the inner most black contour. Figure 10 in the paper.

There are a couple of interesting conclusions from the model:

Is it a comet?

The final bit of compelling evidence for the observed dips in brightness of KIC 3542116 being due to transiting comets is another dip, however this time it observed for a different star called KIC 11084727. 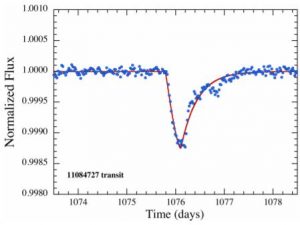 Figure 6: Strikingly similar to the dips shown in figures 3 and 4, the team believe this is another example of a transiting comet. Figure 12 in the paper.

Not only are the similarities between the observed dips exciting, this star is a near twin to the main star of interest in this bite. If these are indeed comet transits around two nearly identical stars, we are left with two interesting suggestions:

So the answer to the question ‘Is it a comet?’ is probably, meaning Kepler has found its first comet! Currently there are a mere 11 stars around which exocomets have been observed or suspected and this explains why scientists are quite excited about Kepler’s discovery. If we can observe comet-like transits in other stars with the relatively old technology on-board Kepler, then upcoming missions like The Transiting Exoplanet Survey Satellite (TESS) will have no trouble of all. This could be quite a turning point in exocometary science, and will hopefully lead to an exciting era of catalogue expansion.