Title: A new method to quantify the effect of baryons on the matter power spectrum

Status: Published in the Journal of Cosmology and Astroparticle Physics (JCAP),  closed access

The standard model of cosmology (ΛCDM) tells us the matter content of the universe with exquisite precision. Matter can be broken up into two chunks: normal, visible, matter including galaxies, stars, and gas that we know and love in the night sky, and the other much larger piece – invisible dark matter. The visible matter is referred to as “baryonic” (as in, made of baryons), and comes along with all the rich physics of fluids, thermodynamics, and radiation. In contrast, dark matter (at least, the cold kind) is extremely simple. Dark matter only interacts gravitationally, and this simple fact allows for very accurate simulation of dark matter dynamics using Newtonian gravity N-body simulations.

Dark-matter-only N-body simulations are excellent for describing the formation of dense dark matter halos, where galaxy formation takes place, but do not tell us anything about galaxy formation or its effects, where normal baryonic matter plays a large role. To accurately capture the full physics at play, hydrodynamic cosmological simulations are required to include gas, stars, and radiation (see Figure 1). However, even these “full-hydro” simulations are fundamentally limited by the smallest length scales that can be resolved in the simulation (often of order 1 kpc – for reference, the closest star to the solar system is roughly 1 pc away). As a result, they cannot capture the full details of small-scale effects that drive gas outflows (or “feedback“) via supernovae explosions or Active Galactic Nuclei (AGN). The modern solution to this is to use so-called sub-grid models, which approximately capture the effect of the small-scale physics that cannot be resolved.

Today’s paper is concerned with the effect of baryons – and particularly feedback – on the distribution of dark matter. You may have heard that we live in the age of precision cosmology, and amazingly, cosmologists now need to worry about percent-level effects in their models of the dark matter density distribution at relatively small length scales. To reach this level of accuracy, models and simulations need to account for the impact of baryons on the dark matter distribution, which can be gravitationally disturbed by something like an AGN jet. Such disturbances are not accounted for in the dark-matter-only simulations widely used in cosmological analyses, usually because hydro simulations are astronomically more computationally costly than dark-matter-only ones. This difference in cost is so enormous that using only hydro simulations in cosmological analyses would be impossible. Faced with this dilemma, what do we do?

These authors suggest a way forward by taking the outputted density of matter in the dark-matter-only simulation, and accounting for baryons through halo profile corrections that impact measured statistics. The matter power spectrum P(k) is the primary summary statistic used to probe the matter density distribution for information about fundamental cosmological parameters. At its core, the matter power spectrum tells you roughly how likely it is that matter clusters gravitationally on a certain length scale. It is written as a function of wavenumber k, which you can think of approximately as an inverse length.

To measure the impact of including hydrodynamic physics in simulations on this central statistic, the authors model the impact of various baryon-influenced components on the dark matter halo density profile (see, for example, this astrobite for some discussion of halo profiles). By adding stellar and gas profiles, the authors modify the vanilla dark-matter-only density profile of halos. Figure 2 shows the impact of each of these components individually on the matter power spectrum through the ratio of the power computed from simulations with hydrodynamics to the power computed with only dark-matter-only simulations. 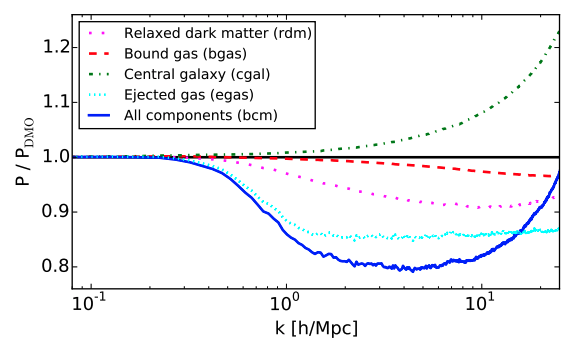 Figure 2: Figure 6 of the current paper. The ratio of the summary statistic of choice (the matter power spectrum) for the hydrodynamic simulations to the dark-matter-only (DMO) simulations. Here the hydrodynamic components of the model are enumerated and all contribute to a spoon-like suppression of the dark-matter-only power spectrum. This suppression is at its strongest at high wavenumber k, or on small length scales.

In detail, the model components account for four main effects:

The net effect (solid line) of all these contributions is an overall suppression in the matter power spectrum at high wavenumber k, or at small length scales. This suppression shows that on small scales, the dark-matter-only simulations significantly disagree with the hydro simulations, with a mismatch of up to 20% due to baryonic physics! The authors note that the ejected gas is the most important effect overall, but with the stellar component being especially dominant at small scales (the ramp up in the ratio at k ~ 10 h/Mpc). The response of the dark matter (a.k.a. the dark matter relaxation) is to expand out with the ejected gas and can approximately be seen in the similarity of the pink curve and the cyan curve shapes.

These types of baryonic corrections are unavoidable for upcoming redshift surveys like DESI, LSST, and EUCLID. In part due to the large number of galaxies that these surveys will find, we will soon be able to accurately probe P(k) on the small scales where baryonic effects matter. Since these authors find gas ejected by AGN feedback to be especially significant, it will be important to continue to calibrate baryonic corrections with observations (e.g. with the Sunyaev-Zeldovich effect) to maximize the information extracted about dark matter and cosmological parameters. It turns out that even when thinking about dark matter, gas-trophysics reigns supreme!