In recent years, large galaxy surveys have given us an unprecedented look at galaxies at a wide range of redshifts. This has led to the discovery of a bewildering number of new galaxy types—a Galaxy Zoo, if you will. These galaxy subpopulations are important to study because they can provide direct links between the high-redshift universe and the galaxies we see today. (Just to refresh your memory, redshift is both a measure of distance and age, so high redshift means far away, when the universe was older.)

For example, the “Green Pea” galaxies were discovered by citizen scientists, who noticed that these galaxies don’t look much like traditional early-type (elliptical) or late-type (spiral) galaxies. (See this page for a quick primer on the differences between some galaxy classifications.) Instead, these Green Peas look… well, small and green (Figure 1).

This led to a discussion forum thread title (and eventually a Hubble Space Telescope proposal subtitle): “Give peas a chance.” The name stuck, and perhaps more importantly, Green Peas were found to be low-redshift analogues to high-redshift galaxies called Lyman-alpha emitters, which give us important information about the epoch of reionization.

But Green Peas aren’t the only weird galaxies out there. More recently, even lower-mass galaxies have been discovered. These galaxies, called “blueberries,” are similar to the Green Pea galaxies but fainter and with more intense star formation. (I personally think this is a poor choice of name because actual blueberries are more massive than actual peas, but they do look like blueberries (Figure 2). And maybe the people who named them were just really hungry?)

LBDs: They ran out of food names

The Little Blue Dots were found in the Hubble Frontier Fields, patches of sky that the Hubble Space Telescope stared at for a really long time. 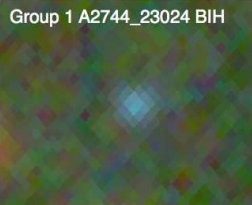 Figure 3. One of the Little Blue Dot galaxies. From Figure 2 in the paper.

The LBDs don’t look much like other galaxies we’ve observed. They’re about 10,000 times less massive than the Milky Way, with stellar masses less than

It’s hard to overstate how ridiculously quickly star formation is occurring in these galaxies. In fact, if the star formation rates have been constant, the galaxies must have formed within the last hundred million years or so. (That’s younger than the Earth!) Also,they must be very gas-rich in order to form stars so quickly, since gas is needed to form stars.

The LBDs weren’t just found in the local universe, either. Some LBDs (see Figure 4) were discovered up to redshifts of about 5, which corresponds to about 12.5 billion years ago. So what did these galaxies become as they evolved over time? (Yes, I know you can probably guess from the title of this post, but let’s at least see how the authors got to that conclusion.) 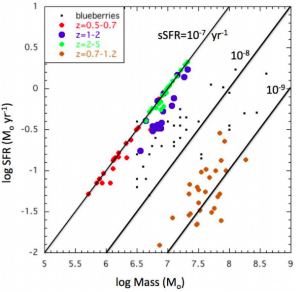 Figure 4. Star formation rate (SFR) as a function of mass for the LBDs (colored points) and blueberry galaxies (black points). LBDs are colored by redshift (low redshift, medium redshift, high redshift). Brown points are galaxies that look like LBDs but have lower sSFRs.

What? Your LBD is evolving!

The current paradigm of

CDM cosmology predicts that large structures are built up from smaller building blocks, so maybe low-mass LBDs were the building blocks for the massive galaxies we see today? This very scenario has been seen in cosmological simulations, in which compact, highly star-forming galaxies called “blue nuggets” (another weird name, and one that isn’t even appetizing) evolve into massive quiescent galaxies. This might be a great model for LBDs… except these blue nuggets aren’t as intensely star-forming as the observed LBDs.

The authors use some quick calculations to show that LBDs could produce globular clusters of up to a million solar masses, about the same as some of the most massive globular clusters observed in the nearby universe. Furthermore, the clusters produced by an LBD would make up a large fraction of the total stellar mass in the LBD, a scenario that’s consistent with what we see in local dwarf galaxies.

So there you have it: LBDs might be the progenitors of massive globular clusters! The evidence is a bit circumstantial, but it’s not a bad guess. More work will be needed to verify this link, and hopefully we’ll learn more about these strange galaxies along the way.