Diagnosing the amnesia of Exoplanetary Systems

Title: Do planets remember how they were formed?

The abundance of discoveries of exoplanetary systems over the last two decades, especially from the Kepler Mission, have revealed an immense diversity in terms of planetary masses, sizes, atmospheric properties, and potential formation histories. The marked differences in the architectures of these systems with respect to that of our solar system have pushed astronomers to revise their planet formation models, that were earlier based solely on the solar system. In this game of exoplanetary systems archaeology, two of the most important pieces of information that can be used to understand the formation pathways and evolution history of exoplanetary systems are the planet sizes and their respective orbital periods (both together representing the size-ordering of planets in the system).

Fortunately, the transit method of detecting a planet transiting in front of a star has provided a large ensemble of multiplanet systems with robust measurements of their sizes (relative to the star) and orbital periods. It is quite rational to expect that the observed size-ordering in these systems could contain some information about the history of their formation. But wouldn’t it be reassuring to actually be able to quantify the information content these systems might retain about their early stages of formation?

By invoking an information theoretic approach of quantifying information, employing counting methods from combinatorics, and leveraging the large sample of multiplanet systems observed by Kepler, today’s paper tries to put forward a quantitative argument to determine if the observed size-ordering of planetary systems contains any residual information about their past.

Calculating the entropy of a planetary system

In his seminal work in 1948, Claude E. Shannon laid down the foundations of information theory which extended the connection between entropy and probability from statistical thermodynamics to the field of data communication. His work introduced the concept of quantifying the information content (or equivalently the amount of uncertainty) of a stochastic system in terms of its entropy. The author uses the same approach to devise three formalisms to compute the information entropy of a multiplanet system based solely on the size-ordering of its planets. The key factor distinguishing the three methods is how a unique microstate of a planetary system is defined. The first way to do that is to define the microstates solely on the basis of a tally score (see Figure 1). When going outwards from inner planets, the tally score T for the observed size ordering is calculated by adding ti = +1 if the next planet is larger, and ti = -1 otherwise. The same tally score can be reached in a number of different size-ordering permutations of the same system of planets, and this number (determined combinatorially) is defined as the occupancy of the microstate. In this way, for a microstate of the system defined by a tally score T  and occupancy WT, the entropy ST  can be calculated using Boltzmann’s entropy formula (ST = log WT). However, the inadequacy of such a scheme becomes evident when we look at its application to the solar system itself, which despite clearly having a size-ordering trend appears to be extremely disordered when we look at its tally score based entropy (as shown in Figure 1).

The simple scheme of looking only at the final tally scores masks an important measure of randomness in the system, and that is the “memory” of score flips when computing the total tally for a system. This is the additional information that the author tries to take into account to come up with the other two schemes, both of which can distinguish a system with random score flips from one planet to another from a system with a clear size-ordering trend. The first of these two schemes is the integral path scheme, which introduces the integral of the tally score when moving from one planet to another in sequence (shown by I in Figure 1) as a second degree of freedom to the original tally score based microstate, effectively splitting it into a larger number of unique microstates. By increasing the number of unique microstates possible for a given number of planets, this scheme essentially decreases the occupancies for each unique microstate (the sum of their occupancies remaining equal to the occupancy of their parent tally score based microstate). 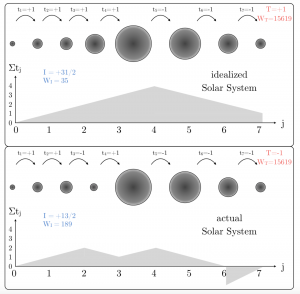 Figure 1: Entropy scores of the idealized solar system (Mars replaced by a Super-Earth) and the actual solar system. The tally scheme is shown by the values of ti as you move from one planet to next, and the integral path scheme by the shaded region. T and I are the entropy scores from the simple tally based scheme and the integral path scheme respectively, and WT and WI are their respective occupancies or the number of permutations of the system that will lead to the same entropy scores. The tally based entropy shows an absurdly high value of entropy for even the idealized case of size-ordering, but notice the dramatic decrease in the occupancy (and hence the entropy) when we move to the integral path definition of entropy. Figure 4 in the paper.

As it can be seen in Figure 1, entropy of the solar system dramatically decreases under this new definition. The next scheme also does a similar job by adding another degree of freedom to the microstates based on a parallel tally score that updates whenever there are “change points” or flips in the calculation of the original tally score. The author applies all the three schemes to 224 Kepler multiplanet systems (all containing at least 3 planets) and compares the resultant entropy scores with those of simulated randomly evolving systems with the same number of planets. 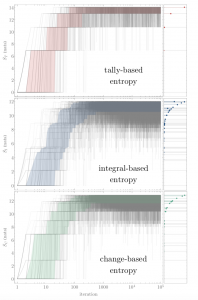 Figure 2. Simulation of the evolution of entropy for a system with 10 planets starting with a zero entropy state, under 106 iterations of random swaps (a proxy for time) between neighboring planets. Note the average increase in the entropy of the system under all three definitions of entropy. Figure 3 in the paper.

Analogous to the entropy considerations in statistical thermodynamics, information entropy for planetary systems free to evolve under chaotic dynamical interactions is also expected to increase with time. With swaps between neighboring planets of a system as a proxy for time, the simulated evolution of entropy for a system starting with zero entropy under all three schemes shows a clear increase in entropy of the system with time (see Figure 2). The Kepler multiplanet systems analyzed in the paper, however, exhibit a statistically significant deficit in their entropies as compared to what would be expected from simulated purely randomly evolving systems with the same number of planets. This deficit in entropy scores shows that the observed Kepler multiplanet systems haven’t yet reached a purely random state and indeed retain some information about their formation history. It quantitatively reinforces the argument that the study of initial formation conditions of observed planetary systems is not entirely futile.

The author suggests further improvement to the entropy schemes by accounting for slight differences in planet sizes, specific distribution of their orbital separations, and effects due to stellar age and binarity. The work in this paper certainly contributes to the emerging subfield of “exo-informatics”, which can help in making more holistic population-based inferences for exoplanets in the future.