The Deepest Rumblings of the Sun

Title: Asymptotic g modes: Evidence for a rapid rotation of the solar core

Far below its surface, the Sun slowly breaths with invisible pulses. Blobs of plasma are launched upwards by buoyant forces, only to reach the peak of their trajectories and plunge back to the depths below. This motion is known as a g-mode oscillation, and until recently it was unseen by solar scientists. In today’s paper, Fossat et al. describe one of the most promising detections of the g-modes to date and the implications for the Sun’s deepest layers.

While the Sun appears constant in brightness to the naked eye, careful telescope observations reveal that it periodically dims and brightens on a miniscule scale. Just as a song is made from many notes, the flickering occurs at countless different frequencies that create the “music” of the Sun. Helioseismology, an observation technique that tracks vibrations deep into the Sun, uses Fourier analysis to determine which frequencies are most important and study three potential sources of brightness fluctuations on the Sun: p-mode, g-mode, and f-mode oscillations. Since the brightness of plasma is strongly related to the density, each mode is associated with material compressing or decompressing in some way. P-mode and f-mode oscillations are frequently observed at the solar surface, but the g-modes lurk far beneath the surface of the Sun. By studying g-modes, we are studying the lowest depths of the Sun far below what is visible to us. 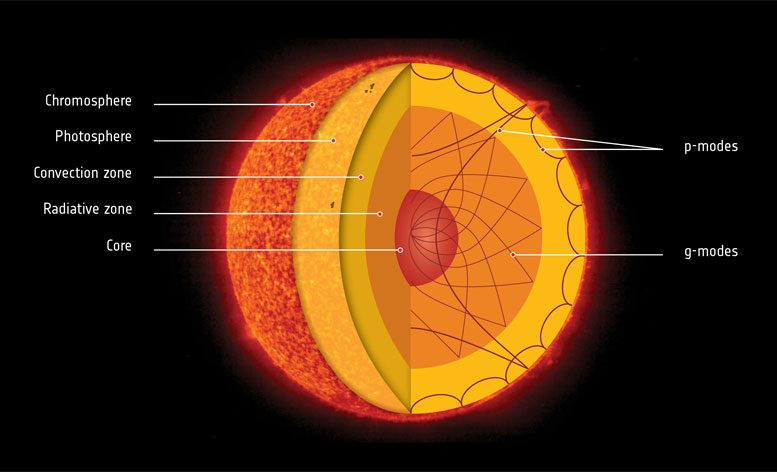 Figure 1: An illustration of the layers of the sun. While p-mode oscillations are able to travel from the surface all the way to the core, g-modes are unable to escape the radiative zone. Credit: ESA

Density increases as you move deeper into the Sun due to stronger gravitational forces holding the material more tightly. In a g-mode oscillation (named for the role gravity plays in driving the oscillation), a low density blob of material will float upwards due to buoyancy, only to overshoot and land in a region with even smaller density than the blob. Gravity then pulls the blob back down, only for it to overshoot again and sink too deep. This back and forth motion only occurs in the Sun’s radiative zone which extends from the center to two-thirds of the way to the surface. The final third of the Sun up to the surface is the Sun’s convective zone, in which blobs carrying heat upwards mix with the surrounding plasma. As a result, g-mode oscillations are damped out well before they reach the surface, making observations of the mode seemingly impossible (Fig. 1). In nearly four decades of helioseismic measurements, the few reported observations of the g-mode to date have all turned out to be artifacts. 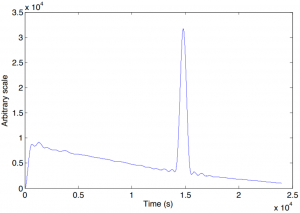 Figure 2: The sum of the 34,612 Fourier transforms considered by the authors. The large central peak demonstrates that the studied p-mode oscillation almost always takes about 1.5 x 104 s (4.2 hours) to travel to the center of the Sun and back. Figure 5 in the paper.

The work performed by Fossat et al. (2017) is the most promising observation of g-modes yet. Since g-modes are directly unobservable, the team sought for evidence of their existence in much more readily available p-mode observations. P-mode oscillations occur as sound waves (material compressing and decompressing in a slinky-like effect) travel into the Sun. Since the speed of sound depends on density, as the waves travel into the higher density regions of the Sun they refract until they are completely turned around and return to the surface. If the waves happen to pass through a blob of low-density or high-density material moving according to the g-mode mechanism, their velocities, and therefore the time required to travel to the surface, should be altered. Using 16.5 years of data from the GOLF (Global Oscillations at Low Frequencies) instrument on the SOHO space observatory, the authors characterized the travel time for the same p-mode over 34,612 eight hour intervals (Fig 2).

They found that the time required for a p-mode oscillation to travel into the Sun and back would typically vary by less than 2%, an effect produced by hundreds of g-modes. By studying how that variance would itself vary over time the authors also detected the horizontal motion of the g-mode oscillations caused by the rotation of the core. The sound waves are accelerated if they move in the same direction as the g-modes and decelerated if they move in the opposite direction, causing the travel time frequency to split into two nearby values. Analysis revealed a 210 nanohertz splitting of the g-mode that did not appear in artificially created data with randomly damped and excited p-modes. As a result, the authors conclude that the feature has less than a 0.0002% chance of occurring randomly.

By calculating the strength of the splitting effect, the authors allow our first glimpse into the rotation of the deepest layers of the Sun. According to their analysis, the core is rotating at an alarmingly fast rate of one revolution every week, almost four times faster than the outer shell of the Sun! Such a result has enormous implications for the evolution of our solar system’s rotation and the rotation of extrasolar systems. However, the authors admit that it is not trivial to explain how the core could be rotating so rapidly or what dynamic effects it could have on the outer solar envelope. Intensive modeling efforts will be required to fully understand the findings of this paper. If validated, however, the first observations of g-mode oscillations would offer unprecedented insight into the solar core.

Wobbles in the Sun