Astronomers extract information from the light we have received. One of the main tasks of interest is to look for fingerprints that can be attributed to life, or “biosignatures“. This is challenging but probably the best we can do until interstellar travel is realized and Elon Musk can send space probes to land on exoplanets. In today’s paper, the authors calculate the disequilibria in Earth’s atmosphere-ocean system over geologic history. 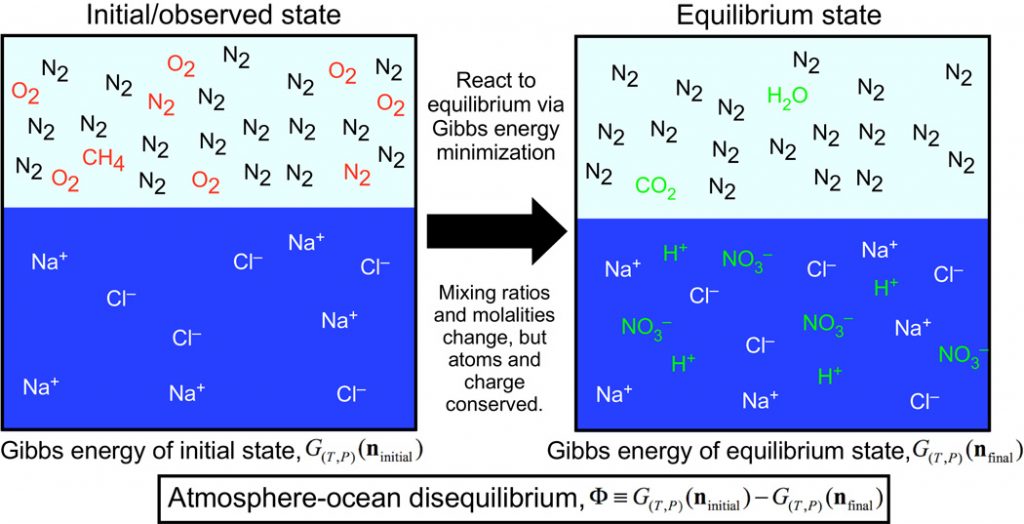 Figure 1. The method of quantifying the disequilibrium of the atmosphere-ocean system by calculating the energy difference between the observed and equilibrium states. Red denotes gases that are consumed, whereas green species are created by equilibration. This particular example shows Earth about 500 million years ago if it were in equilibrium, in which N2, O2, and liquid water would react to form nitric acid and methane would be oxidized into CO2 and H2O.

One of the vital ingredients of life on Earth, oxygen, has been an obvious and popular choice of biosignature. However, there are some drawbacks. Molecular oxygen is more difficult to detect due to its symmetric structure (lacking dipole moments to create absorption features). Moreover, the presence of photosynthesis does not guarantee oxygen being built up to detectable levels. There was little oxygen in the Archean eon (4.0 to 2.5 billion years ago) despite the possible origin of oxygenic photosynthesis by 3 billion years ago. A more general concept of searching for chemical disequilibrium was proposed by James Lovelock in the 1960s. The idea is to look for gases in the planet’s atmospheres that are incompatible in the long term, which might be maintained by life. For example, without oxygen being replenished from photosynthesis and biologically supplied methane, O2 and CH4 would react to form CO2. Since the potential energy achieved a minimum in chemical equilibrium, the authors quantify the magnitude of chemical disequilibrium by comparing the energy (Gibbs free energy) difference between the observed (out of equilibrium) and the equilibrium states, illustrated in Figure 1. 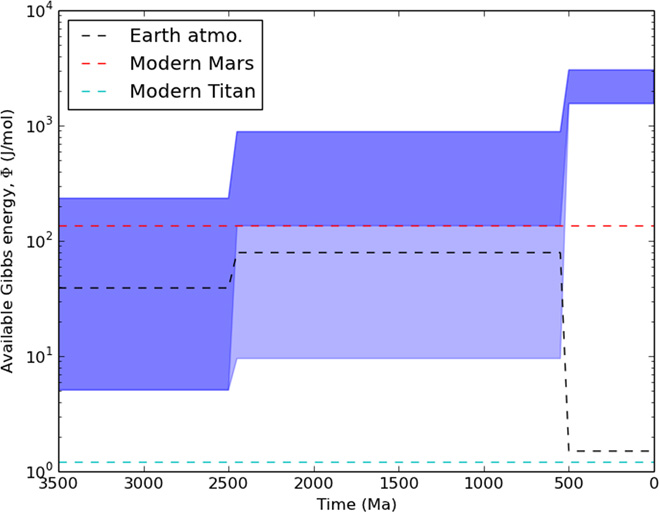 Figure 2. The evolution of Earth’s atmosphere-ocean disequilibrium through time (measured by available Gibbs free energy). The uncertainty is mainly due to geological evidence of methane before 2.5 billion years ago and of oxygen between 2.5 and 0.5 billion years ago. 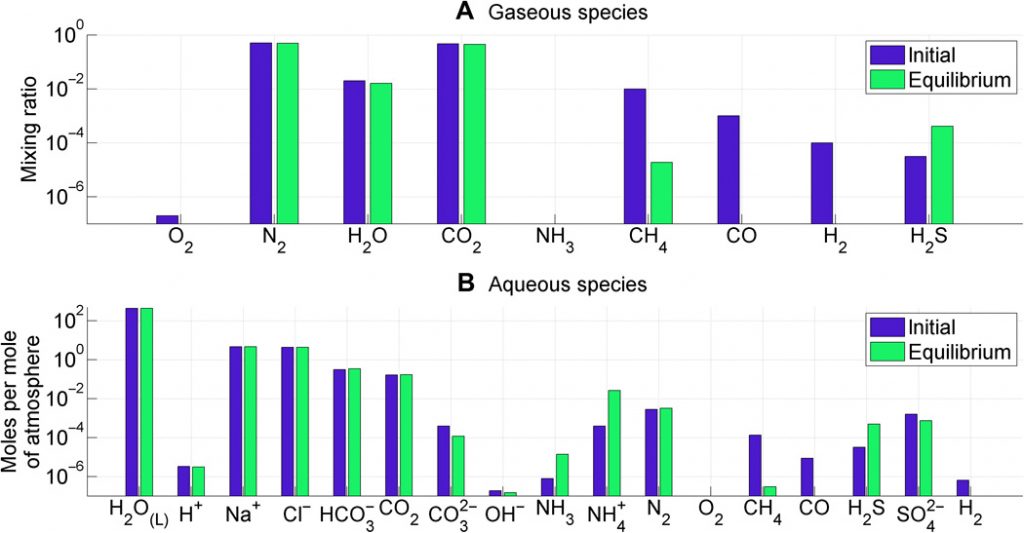 Figure 3. Atmosphere-ocean disequilibrium in the Archean. Blue bars are interpreted abundances from the literature, and green bars are equilibrium abundances. A and B separate atmospheric species and ocean species.

Investigating which species are out of equilibrium and therefore contributing to the available Gibbs energy (shown in Figure 3) the authors find the disequilibrium in the Archean (about 4 to 2.5 billion years ago) is mostly contributed to the coexistence of CH4, N2, CO2, and liquid water. Methane continuously produced by early life is required to maintain the atmospheric concentration, as otherwise it would have been photodissociated in the upper atmosphere. And it is difficult to have carbon dioxide at the same time without also producing carbon monoxide by non-biological processes. Additionally, the molecular features of CO2 and CH4 are relatively easier to detect. As a result, the authors suggest the coexistence of CO2 and CH4 (and the absence of CO) should signal life for Earth-like exoplanets with low-oxygen atmospheres.

With the planned launch of the James Webb Space Telescope in 2019, we should expect some exciting observations of transiting exoplanets, such as the TRAPPIST-1 system. The authors report new biosignatures not solely based on current Earth, but broaden the context with early Earth conditions. This would provide us more clues about whether the planet hosts life.