The Search for Extraterrestrial Intelligence

The detection of extraterrestrial intelligence is a quest that has fascinated astronomers since we first realized that there were worlds beyond our own.

Listening projects, like SETI@home and Breakthrough Listen, look for possible signals from other civilizations. Such a discovery would unequivocally prove that we are not alone. However, in order to efficiently transmit a message across interstellar space, a civilization would likely beam it as tightly as possible towards its destination. That means that we wouldn’t be able to eavesdrop if we weren’t in line with the beam.

In order to remain in geosynchronous orbit, a satellite must stay at a particular distance from its planet. If it comes closer, it will orbit faster than the Earth rotates, and if it is too far away, it will go slower than the Earth rotates. However, these orbits can have some slight inclinations. If the orbit is inclined, the satellite will not remain directly overhead, but will trace out a small analemma over a sidereal day. The author coins the term “Clarke exobelt” (CEB) to describe the satellites in this region of space around a planet.

Figure 1: An illustration of the Clarke exobelt. Each small dot represents a satellite in geosynchronous orbit around the planet, the brown sphere. The yellow sphere on the edge represents the star. Here, the size and density of satellites have been greatly exaggerated. The opacity,

, increases from the face (

As can be seen in Figure 1, a high density of satellites in geosynchronous orbit will create a thick band which could block out light from the star. The more satellites, the more light they will block. This opacity will block more light from the star than the planet alone, resulting in a noticeable difference in the transiting planet’s light curve. An example of what a light curve from Earth’s CEB might look like is shown in Figure 2. As the planet moves between us and its star, the light we receive from the star will decrease. If the planet does not have a CEB, the light curve will exhibit a relatively flat decline. However, if there is a thick band of satellites around it, these will begin to obscure the light from the star before the planet is fully in front. This will result in a small dip right before the main transit happens. It will also cause more light to be blocked overall, resulting in a deeper light curve. 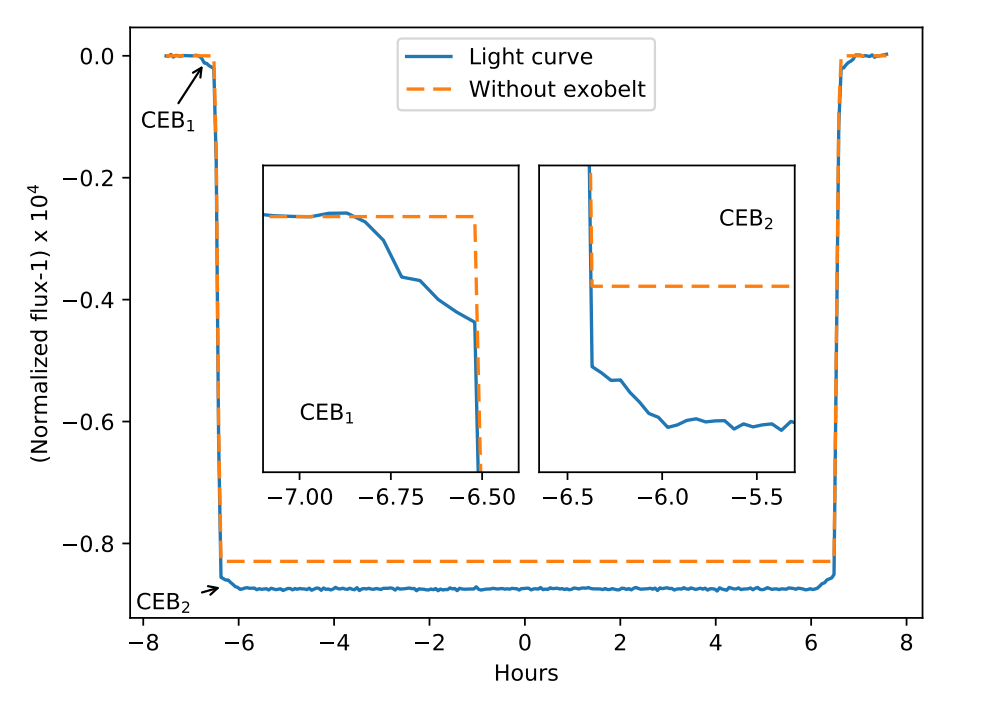 Based on publicly available databases, the author identifies 1738 satellites in geosynchronous orbit around the Earth. This is a low estimate, because these databases do not include decommissioned satellites, space junk, or classified satellites. For the past 15 years, the number of satellites in geosynchronous orbit has been increasing exponentially. The author predicts that at this rate, within 200 years, our CEB will be thick enough that it could be observed from nearby stars by civilizations with the same detection capabilities as us.

The author puts forth several other simulated light curves for systems of interest, including TRAPPIST-1. In each case, the simulations use the telescope specifications of the Kepler mission, making these possible to be detected using our own technology.

In order to determine if the shape of a light curve is from a  CEB, and not caused by some other effect, it is important to know how far from the planet the CEB would be. This would allow researchers to model what the light curve should look like with and without a CEB.

) of the CEB depends on the mass (

) of the planet as

. An estimation of the planet’s mass can be made by using the transit photometry to find its size. Assuming the planet has a density similar to the Earth, we can calculate its mass. The rotational period, on the other hand, is more difficult to find. Future observations may be able to create surface maps of planets to determine rotational periods. While this has not yet been done, the studies show that this could be possible for planets up to 5 parsecs away. If the planet is tidally locked to its star, the rotation would be straightforward to find. Tidal locking may be very common for planets orbiting in their star’s habitable zone, making it possible for astronomers to at least approximate the planet’s rotational period.

Figure 3: Light curves for the Proxima b and TRAPPIST-1 systems. Like in Figure 2, these show the light curve of a planetary transit without a CEB (dashed line) and with one (solid line). Figures 5 and 6 in the paper.

Finally, the author examines whether or not such a light curve could occur naturally. A planetary ring system could produce a similar light curve pattern. However, as the author points out, evidence from our own Solar System suggests that rings only form outside of the frost line. This is beyond the star’s habitable zone, making it unlikely that life like ours would develop out there. There is also no reason a ring system would prefer to form in geosynchronous orbit instead of any other inclination. While this orbital band is of high use to a civilization, there is no natural preference for it. Ring systems also tend to be very flat. Objects in the rings are spread out over the radial direction, but do not have much thickness in inclination. Geosynchronous orbits, on the other hand, are very thin radially, but have a thicker inclination. This will create a slightly different signal, which could be detected.

Are They Out There?

Many of the ideas presented in this paper are still speculation. These are extrapolations of what we know about civilization here on Earth. Aliens might not use geosynchronous orbit enough to create a thick band of satellites. They may be significantly more advanced than us, and have no need for a large number of satellites. Or they could be much less advanced than us, without the capability to get into orbit. The nearest civilization to us might even be too far away for us to be able to see its CEB. When discussing alien civilizations, it is important to keep in mind that we have very little data to base our ideas on, and must make many assumptions.

Speculative though it may be, the method presented in this paper is another tool in our kit we can use on our search for extraterrestrial intelligence. This technique represents a way we can search for alien civilizations with our current detection capabilities. It relies only on technologies that we know are possible. Upcoming missions like the James Webb Space Telescope and TESS could apply this method to search for an alien civilization.