A Stellar Review: Re-Analyzing the Kepler Stellar Radii with Gaia

Status: Submitted for Publication to AAS [open access on arxiv]

One of the most important mantras in studying exoplanets is this: you only know your planet as well as you know your star. This is because almost 95% of exoplanets have been detected indirectly, relying on stellar measurements to infer the existence of a planet. Using the transit method, we search for small dips in star light as the planet passes in front of the star. From this dip, we can approximate the size of the planet, assuming we know the size of the star. For radial velocity detections, we measure the “wobble” in star light as the planet tugs on its host star. And from this wobble we can measure the approximate mass of the planet, but again this is assuming we know the mass of the star. Because we rely so heavily on the stellar characteristics to infer planetary properties, we must characterize and classify these stars to the best of our ability.

But determining the masses, sizes, and even temperatures of stars is a challenge. Stars only provide one observable – their light. It is only when we combine their spectrum with models that we are able to deduce their other physical properties. Yet, this is also difficult as we require their intrinsic luminosity, without effects of distance. A dim close object may appear brighter than a distant bright one. Therefore, to determine a star’s actual brightness we need to know its distance. Without a precise distance measurement, we cannot accurately obtain its intrinsic luminosity, and without this information, we cannot properly constrain any of its characteristics and may even potentially misclassify the star!

With the recent Gaia data release of new parallaxes, we now have accurate distance measurements to over a billion stars. In other words, we are now able to better characterize these billion stars, which is an essential step towards better understanding exoplanets. That is the goal of this paper. The authors use Gaia distances to improve the stellar radii measurements of nearly all of the stars observed by Kepler. From these updated radii, the authors are also able to better constrain the sizes of thousands of confirmed and potential exoplanets. 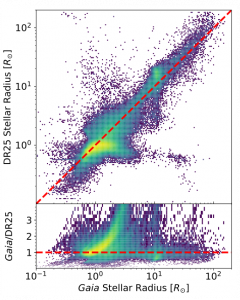 Figure 1: A comparison of stellar radii before Gaia (Kepler DR25 Catalog) and after Gaia. The red line represents a 1:1 relation between the two data sets. It appears that after Gaia, many stars have larger radii than previously reported. (Figure 3 in paper)

Of the ~190,000 stars observed by Kepler, the authors improved the radii measurements of >180,000 of them. With the Gaia data, the authors achieved a precision 4-5 times better than previous measurements. They also discovered that while the radii for many stars remained the same after applying the Gaia correction, there was still significant scatter, which is shown in Figure 1. The color in this figure correlated with the number of stars corresponding to that measurement. A general 1:1 trend is plotted in red, which indicates where there is no change in stellar radii before and after Gaia. For some of the Kepler stars, the Gaia data produced larger radii that what was initially reported, notably for stars that were initially reported at 1 solar radius.

Figure 2 plots a Hertzsprung-Russell (HR) Diagram for all updated Kepler stars. The black points represent main sequence stars (like our Sun), while the green points plot the subgiants, and the red points plot the giants or evolved stars in the data set. Kepler’s main task was to find Earth-like planets around Sun-like stars, which is why there is a large number of stars between 5500-6500K. Initially these stars were assumed to be on the main sequence, though the authors now show that quite a few are actually subgiants, or stars that are beginning to evolve off the main sequence. Regardless, 65% of stars targeted by Kepler are main sequence stars, while 23% are subgiants and 12% are giants. The authors note that the re-classification of stars may lead to future studies on stellar and planetary evolution as several of these subgiants host their own planetary systems. 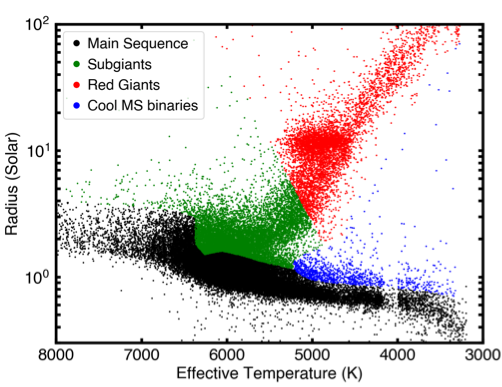 Figure 2: HR Diagram for the stars observed by Kepler. Instead of plotting luminosity as a function of temperature which is standard for HR diagrams, the authors chose to compare temperature and stellar radius. The stellar radius can act as a proxy because it is proportional to the square root of the luminosity. (Figure  4 in paper)

And Now For the Planets

But what about those stars that actually host planetary systems? Figure 3 plots the HR diagram of only stars with detected planets or planet candidates. Red points are the confirmed stellar hosts, while the black points are the stars that have a planet candidates, but follow-up is required to confirm. Again, there is still a pile-up of stars around 6000K as seen in Figure 2. Interestingly not many planets are found around larger main sequence stars, but this is biased as signals are smaller around large stars. There also appears to be a large number of planetary candidates around giant stars. It is difficult to confirm these planets because giant stars are active and can have large signals that mask planet signals creating false positives. These stars are also larger than main-sequence stars, which creates shallower transits. 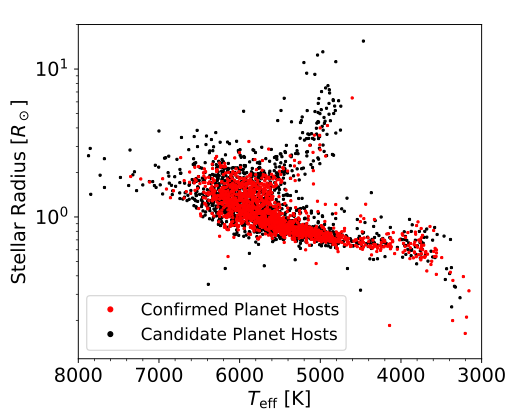 Figure 3: A subset of stars from Figure 2 that host planets or unconfirmed planets. Confirmed planets appear to prefer main-sequence and subgiant stars, though it is likely to be a detection bias. (Figure 5 in paper) 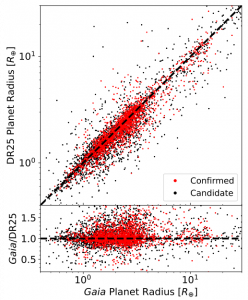 Figure 4: A comparison of planetary radii from pre-Gaia (DR25) and post-Gaia. Most planets follow the 1:1 correlation with some scatter, though there appears to be a preference for larger planets after Gaia. This is due to the larger stellar radii found with Gaia and displayed in Figure 1. (Figure 6 in paper)

When comparing the planetary radii before and after Gaia, the results show less scatter than with the stars (Figure 4). This is promising, though there is still some scatter in the data, especially among the planetary candidates. There is also some skew towards larger planets after Gaia, a consequence of finding larger stellar radii. The authors also find that the more precise stellar radii do provide better constraints on the planetary radii, though this varies from planet to planet.

With this paper, the authors demonstrate the exciting potential of Gaia for future exoplanetary studies. By better understanding the stellar hosts, we can continue to constrain the characteristics of exoplanets. These will prove essential with the upcoming exoplanet missions, including the just-launched TESS mission. If we have any hope in performing accurate statistical studies of planets or even searching for potential signs of habitability, we must first focus our attention on the stars. After all, we can only observe a star’s light, and look at what we have accomplished with it. All we needed to know was where that light was coming from!