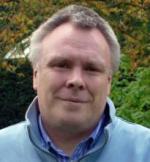 GAIA  is a spacecraft with a difficult mission–  to create the largest and most precise 3D space catalog ever made through parallax measurements. As a member of the GAIA science team, Dr. Nicholas Walton anticipates the GAIA data releases as “a new day for astronomy.”

Dr.Nicholas Walton, from the University of Cambridge,  has studied planetary nebulae and late stages of stellar evolution; recently he has been focusing on “how well [planetary nebulae]  are observed by GAIA, since it is not so easy to detect extended objects” in this survey. 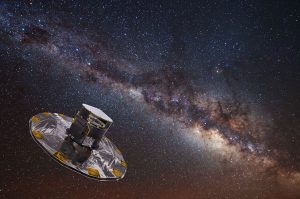 Image of GAIA from http://www.skyandtelescope.com/astronomy-news/gaia-mission-maps-billion-stars/

Dr. Walton describes his path into academia as a somewhat “standard route.” He received his Ph.D. in astrophysics for his studies of hot stars within planetary nebulae. He then went on to complete postdocs, but later in his career, Dr. Walton became “involved in that data side of astronomy [such as] image analysis and big data,” which eventually led him to the GAIA team. With his presentation, Dr. Walton hopes to encourage people to use the data from DR2 (data release 2), which can be accessed through the GAIA data archive.

He encourages young scientists to “publicize your work,  and try and be visible” to the astronomical community. “These days, astronomy is so much more collaborative;  you’ve got to work well with others and have an identity within your [research] groups.” He also adds that sometimes, you’ve also “got to have a bit of luck.”

Dr. Walton says that it is “great to see diversity building up” in the field of astronomy.  Science is improved by including “many teams and groups of people from different cultural backgrounds.” He goes on to say that “interactions across borders are becoming more important” as astronomy moves into a era of big data; “the coming decade is going to be great for data, but might be people limited.”

If you’re interested in hearing more about Dr. Walton’s work and GAIA come check out his plenary talk at 12:20PM today on Thursday, June 7th at #AAS232.