If you’ve ever seen Star Wars (the original saga), you probably remember that scene in A New Hope with the two suns. You know, Luke Skywalker is whining about being stuck on his home planet Tatooine and stomps off into the binary sunset. Two suns hover over the horizon in a way that we Earthlings never witness in our single star system.

Well, this scene in the science fiction masterpiece is not so far off from reality. Planets have been found to exist around binary star systems. Whether or not there are droids and Jedi on those planets is a different story.

Unfortunately, today’s paper is not about Star Wars. But, it is about those binary star systems and how likely these twin sun systems are to host planets. Planets are thought to form in disks of gas and dust surrounding their parent star, called protoplanetary disks. These disks go through many stages of their life cycle — they can look very different at different stages of planet formation — so any hint of disk material around a star may indicate that exoplanets are present. 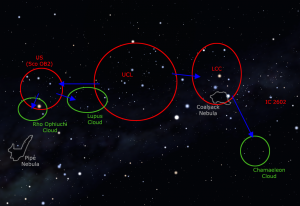 Diagram of the Sco-Cen Association, where today’s authors are searching for binaries with disks. Source: Wikimedia Commons

It is thought that the lifetime of the disk — how long the disk material survives around the star — is very important in the planet formation process. For instance, if the material lasts for a long time around the star and holds up against phenomena like stellar wind, then planets have a longer time to develop. The question that today’s authors are investigating is whether disks existing in a binary star systems have a different lifetime than those found orbiting single stars. If such disks have a shorter lifetime than single-star disks, then planets may not be as likely to form in binary star systems. In contrast, if binary-star disks have similar lifetimes to those of their single-star counterparts, then planets should be equally likely to form in both configurations.

The authors of today’s paper examine the Upper Scorpius (US) and Upper Centaurus-Lupus (UCL) regions of the Sco-Cen association, a group of stars in Scorpius and Centaurus that formed together and still move through space together. The Sco-Cen association is the nearest region to us that hosts massive star formation, so it is a good place to look for stars with circumstellar disks.

Before they could find the binaries, the authors first had to find US and UCL members to investigate. They determined membership probability based on age, distance, and proper motion, since these parameters have been well determined for other stars in the Sco-Cen association. After gathering potential US and UCL members, they started the search for infrared (IR) excess, which serves as a good indicator for the presence of a circumstellar disk. 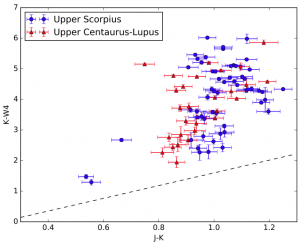 Figure 1: Color-color diagram of chosen US (55) and UCL (28) members with K-W4 color excess. These stars are brighter in the IR WISE filter named ‘W4’ than they are in the near-IR ‘K’ filter, indicating a possible disk. The dashed line represents the expected colors of a star without excess.

IR excess simply refers to the detection of more IR light around a star than would be expected from the star alone. Such excess comes from the dust in a circumstellar disk. This dust absorbs radiation from the host star and re-emits heat at IR (or longer) wavelengths. Dust that is closer to the star will get hotter and therefore re-emit at shorter IR wavelengths, and cool dust farther from the star will re-emit at longer wavelengths.

In this paper, the authors use IR data from the WISE telescope as a disk indicator. By picking out stars that were extra bright in one of WISE’s IR filters, they identified their chosen members that likely host a disk (Figure 1).

The next step was to figure out if any of these final targets are part of a binary system. The authors obtained spectra for all of their targets in order to search for any radial velocity (RV) variability over the available epochs, which may indicate a companion star.

Studying the spectra led the authors to discover that two of their targets are double-lined spectroscopic binaries, stars that give away the presence of a companion star by showing two sets of spectral lines. 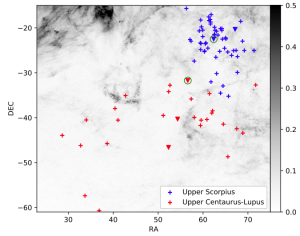 The rest of the targets were not so straightforward. Using Bayesian statistics, the authors created a measure to determine how the RV for each star differed over the observations and added 4 more stars to the binary bunch (Figure 2).

They again use Bayesian analysis to determine a binary fraction (the fraction of stars in a binary system) for their sample, taking into account that they were limited to detecting binaries with relatively short periods (<20 years). The authors find that approximately 8% and 14% of disk-bearing stars in US and UCL are likely in binary systems (see Figure 3). Comparing this to the ~12% binary fraction for field stars in this area determined by another study (Raghavan et al. 2010), this seems to indicate that stars with disks are no less likely to have stellar companions than those without disks. 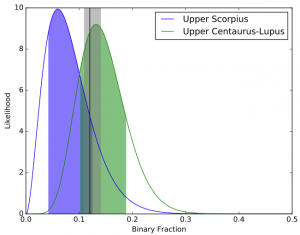 The authors do note that they were only able to solidly confirm two disk-bearing binaries using observations. The rest were found through statistics and simulations. Perhaps their observations showed fewer binaries as a result of a biased target set – targets were chosen for their warmer dust closer to the star, indicated by the WISE data. WISE can’t detect cold dust very far from a star. Some studies show that binary systems have truncated disks, with an empty inner disk devoid of dust (so it would not show WISE excess), even though excess from very cold dust would be present in longer passbands. Maybe that’s what is happening here.

Based on the authors’  full analysis, it looks like binary systems are just as likely to host disks as they are to be barren in space (with no disk, that is). This would indicate that disks belonging to binary star systems don’t have a shorter lifetime than those belonging to single star systems. And if they last just as long, then planets are just as likely to form around two suns as they are one. So perhaps, in a galaxy far, far away, there is indeed a disgruntled young Jedi staring into a double sunset.

When Push Comes to Shove: How Wide Binaries Can Wreak Havoc on Planetary Systems

A Planet Living on the Edge