Article: Friends of Hot Jupiters. IV: Stellar companions beyond 50 AU might facilitate giant planet formation, but most are unlikely to cause Kozai-Lidov migration

Status: Accepted for publication in The Astrophysical Journal

New exoplanets are being discovered at an incredibly fast rate, at times even coming in bunches. We think we have a pretty good idea of how the Solar System formed and evolved, but we still scratch our heads with planetary systems with hot Jupiters, which are gas giants that live inexplicably close to their host stars, and how they ended up there. In today’s paper, we will see how exoplanet hunters are trying to piece this puzzle together by looking for binary companions of hot Jupiters.

“Where I end and you begin”

The most accepted explanation for how the Solar System formed is the nebular hypothesis, which is very simple: All objects started as rocky or icy planetesimals orbiting the young Sun in a dusty disk, acquiring more and more mass with time. Because of higher temperatures and the smaller quantity of material in the inner disk, the small rocky cores (which eventually grow into rocky planets) in this region did not become massive enough to accrete large quantities of gas. On the other hand, the most distant icy cores managed to grow thick atmospheres, becoming gas giant planets. Some recent discoveries have, however, rendered this explanation incomplete.

Hot Jupiters are gas giant planets that orbit very close to their host stars, with orbital periods up to ~100 days (about the same as Mercury), which means they are incredibly hot and exposed to erosion by fierce stellar winds. These objects cannot be explained by the nebular hypothesis alone. Our best guess for how they ended up there of all places is planetary migration. As we will see next, the authors of today’s paper further explored the idea that the presence of a binary stellar companion in systems with hot Jupiters is a key player in the formation of these objects. 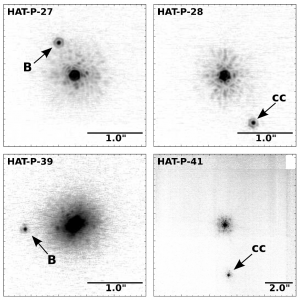 In the present study, Henry Ngo and collaborators, known as Friends of Hot Jupiters, probe a sample of 77 stars that host a hot Jupiter, as well as the configuration of their orbits. They were observed at the NIRC2 camera, powered by the adaptive optics system at the Keck II Telescope (Hawaii) between 2012 and 2016, in a direct search for nearby stellar companions (see Fig. 1 above).

In total, they found 17 companion candidates in 15 of the observed targets, from which we can extract a “raw” rate of binarity. Considering that the search is not complete in the entire spectrum of possible orbital configurations, it is necessary to perform a correction for incompleteness. After doing this correction, they obtain that 47% ± 7% of those systems have stellar companions within separations (distance from the main star) between 50 and 2000 AU, differing significantly from the binarity rates for “average Joe” solar-type field stars (those that are not attached to a cluster), which they find to be ~16%. Additionally, they also use radial velocity data to infer that only ~4% of systems that host hot Jupiters have binary companions between 1 and 50 AU, further suggesting that close binaries inhibit planet formation — no surprises here. All these results can be summarized by Fig. 2 below. 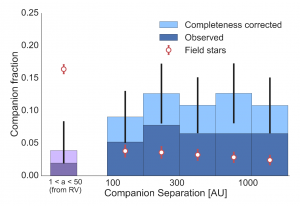 The authors suggest that the reason for a higher binarity rate for systems hosting a hot Jupiter is that a companion at larger separations facilitates the formation of gas giants. These massive planets would then migrate inwards either by gravitational interaction with the dusty disk (type II disk migration) or with a distant stellar companion (also known as the Kozai-Lidov mechanism). They estimate that up to 16% ± 5% of gas giants migrated due to the latter phenomenon, which means it cannot be the dominant migration route for transiting hot Jupiters.

Little by little we have just begun to put the big picture puzzle of exoplanets together, and we have a lot to thank for Kepler and ground-based surveys that we are able to do this. In the near future, the satellite Gaia is going to provide long-term observations that may help us to more precisely constrain the orbits of hot Jupiter-hosting binaries, which in turn will allow a better understanding of their role in planet formation.