We might have mentioned this before once or twice (or three or four or five times…) but dynamically hot Jupiters (exoplanets the size of Jupiter, but extremely close to their host stars) are really really weird. They shouldn’t be able to form so close to their host stars (or maybe they should?) but there’s a fair few of them floating around, so something has to be shunting them extremely close to their stars – and their orbits are often observed to be at very high eccentricities. If that doesn’t surprise you, minute physics have a great video explaining why all our solar system planets are in a plane, and why we’d expect the same for exoplanet systems: the stellar spin and any planetary orbits and spins should all be aligned.

However, in stellar binary systems with a star much further away than the hot Jupiter, it might be possible for an outer stellar companion to force a planet into a tight orbit with high eccentricity via the Lidov-Kozai mechanism. Quanitifying the fraction of hot Jupiter host stars that have wide separation stellar companions would help us to understand this formation mechanism, and shed more light on the weird and wonderful hot worlds that are hot Jupiters. 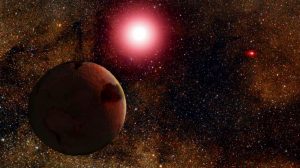 Figure 1. An artist’s impression of a planet in a binary system, orbiting one of the two stars. Credit: Gould et. al/Ohio State University

This is something that’s been studied before, and has even been discussed here on astrobites. Following the trend, today’s paper searches 97 hot Jupiter host stars for stellar binary companions, using a particularly interesting technique known as Lucky imaging.

How (and why) to Get Lucky

The air is really annoying. Yeah, I get that it’s useful for breathing and everything, but all those air particles refracting our light around? Not cool. Even when we build our telescopes at the tops of mountains (most notably in Chile and Hawaii), there are still far too many particles between the telescopes and the light they’re observing, getting in the way.

The particles of air are the reason that stars twinkle: their apparent position in the sky changes very slightly from moment to moment. But this same effect, when you’re zoomed in with a giant telescope, causes the starlight to blur out into a wide smudge, much larger than the theoretical diffraction limit of the telescope.

But, fear not! You have two options for getting around this smearing issue: option 1 is to build an incredibly technologically advanced Adaptive Optics system, where you deform one of the telescope mirrors in real time to oppose the wiggles the atmosphere is adding to your image.

Or, if that doesn’t float your boat, option 2 is to get lucky. Take a large number of very short exposure images, and hope that in at least some of your images the smearing out isn’t so bad after all. Quantify the level of smearing, pick out the best 1% of exposures and combine these into a final image. Analyse said image. Repeat with 2%, or 10%, or 50% of the images. This technique is – you’ve guessed it – the Lucky Imaging technique that is used by today’s authors to search for hot Jupiter host stars with stellar companions.

…or not? A surprisingly high proportion of hot Jupiters appear not to have stellar companions after all, as demonstrated by the “Friends of Hot Jupiters” project previously covered here on astrobites. Maybe, it is highly common for a stellar binary system to be ripped apart – in this case a hot Jupiter could form through a Kozai-Lidov mechanism with a stellar binary, and the second star then be ripped away. Or maybe, there’s a completely different method for creating these hot Jupiters that no-one has figured out yet.

Today’s paper agrees with that result: in a target list of 97 exoplanet host stars, only 45 have companions. This confirms the Friens of Hot Jupiters idea that hot Jupiter planets are presumably forming through another mechanism than the Kozai-Lidov one.

But, there’s a possible selection bias here. Planets around binary stars are much harder to follow up and characterise, so some astronomers might be searching through their candidate lists of planets and removing binary targets before carrying out the vital follow-up observations that are needed to confirm that a planet is there. This is an inherently biased and subjective process, and so it’s almost impossible to accurately quantify the systematic biases that are introduced.

Even with the uncertainty about selection bias, today’s paper adds to the growing pile of evidence that there are too many hot Jupiters in non-binary systems which we haven’t fully understood yet. It also provides a handy catalog of nearby stars worth worrying about for any astronomers planning further characterisation of these hot Jupiters!