Do you take Jupiter for granted? When you were taking your dog for a walk last night, did you stop and think about how your dog could have been hit by a meteorite had Jupiter not been ejecting asteroids from the solar system for the last few billion years – just to protect life on Earth from frequent giant asteroid impacts? Or when you were eating breakfast this morning, did you stop and appreciate how you would not have been able to have breakfast if it weren’t for the fact that Jupiter migrated into the inner solar system shortly after it formed, in order to dump excess planetesimals into the Sun – just to prevent the Earth from growing past its current size and becoming uninhabitable?

We may have Jupiter to thank for shaping the conditions that allow life to thrive on our planet. However, surveys of exoplanets in other star systems have found giant planets to be rare (albeit a new study is more optimistic). In smaller protoplanetary disks (such as those around smaller stars), the lack of gas giants is easy to understand as there simply may not have been enough planet-forming material in the disk to form such a large planet. However even in larger disks, there is a longstanding unanswered theoretical question of how can planets of this size form so quickly before the disk fades away in a few million years. If real protoplanetary disks cannot solve this problem, Jupiter-sized planets may indeed be few and far between.

It was long thought that the rocky cores of gas giant planets (5 to 10 times the mass of the Earth) formed from city-sized planetesimals (> 1 km) merging together, but this takes too long. The reason this process is so slow is that there is a limited supply of planetesimals in any given area of the disk. In the last decade, it has been suggested that the largest dust particles (1 cm to 1 m) called “pebbles” can act as a catalyst to speed up the gas giant growth process because they do not stay where they formed. Pebbles drift towards their stars faster than any other sized object. This change of location makes it possible for pebbles all the way near the outer edge of the disk to reach a rocky core much further inwards and help it grow. Even though pebbles are small, they also make up a large fraction of the mass in a disk – allowing them to readily speed up a planet’s growth process.

However, today’s paper by Mohsen Shadmehri et al. suggests pebbles may not be a good solution to this problem in all cases.

Shadmehri et al. challenge the robustness of using pebbles as a catalyst by more accurately modeling how disks accrete onto their stars. Protoplanetary disks are also called accretion disks because the gas and dust at the inner edge can fall into and be consumed by the star at the center, while disk material throughout the disk also tends to fall further inwards (see Figure 1). There are two main explanations as to why a disk’s material accretes onto its star: turbulence and magnetic winds, but it is unclear which effect is dominant (see this bite for a detailed overview).

While most studies in the past have assumed that turbulence is primarily responsible for the disk’s accretion, the explanation of magnetic winds has gained traction in part because theoretical studies have had trouble finding a source of turbulence strong enough to account for the high levels of accretion observed onto young stars. Previous studies supporting the idea of pebbles as a catalyst for the growth of rocky cores completely neglected the role of magnetic winds in their models. 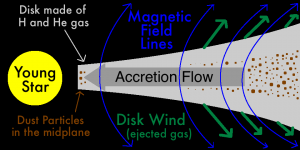 Figure 1. Diagram of a disk around a young star. Magnetic fields fling a little bit of gas out of the disk (green) as it rotates. To conserve angular momentum, the rest of the disk flows inwards. Meanwhile, dust drifts inwards for a different reason (drag forces). With more vertical diffusion (such as with strong winds), the dust will spread more out of the midplane in the up and down directions. Adapted from Fig. 4 of Scott+ 2018.

In order to test the effects of magnetic winds on how much pebbles can contribute to the growth of planet cores, Shadmehri et al. develop an analytic model of the evolution of a disk with magnetic winds of different strengths. They keep the total rate of accretion fixed to match observations, implying that disks with stronger magnetic winds also have less turbulence (while disks with weaker winds are more turbulent). Interestingly in disks with stronger winds, they find that pebbles do not speed up the growth of rocky cores enough for them to ultimately grow into gas giant planets later on.

Pebbles are a less effective catalyst with strong winds because it takes too long for the smallest dust particles (1 micron) to grow to pebble-size (1 cm to 1 m). This slower rate of growth is not because of the winds themselves, but because there is less turbulence in these disks. With less turbulence, dust particles stay closer to their usual near-circular orbits. As a result, they also have slower relative velocities, which in turn makes them less likely to collide with each other and merge into bigger particles large enough to be considered pebbles.

Additionally, the authors account for how stronger magnetic winds spread the dust towards the surface of the disk instead of it staying flat in the midplane (see Figures 1 and 2). With the dust more spread out, the dust density throughout the disk drops, which in turn leads to a lower amount of pebbles growing in the disk. 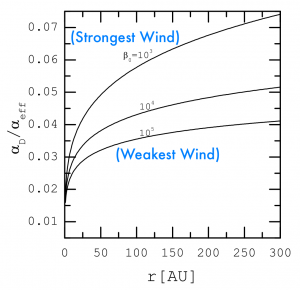 Figure 2. Dust diffusion coefficient (alpha_D) as a function of distance from the central star. With the strongest winds (Beta_0 = 10^3), there is more diffusion, which spreads out the dust particles in the disk — thereby making it harder for them to grow to pebbles. Adapted from Fig. 2 of the paper.

The net effect of stronger magnetic winds causing pebbles to grow both slower and in lower numbers ultimately makes them less effective at contributing to the growth of cores in the disk (see Figure 3). 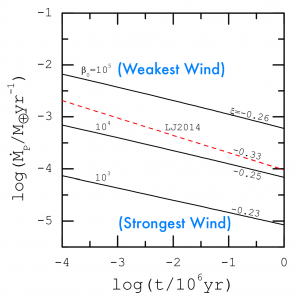 Figure 3. Pebble accretion rates over time. The case with the strongest wind (Beta_0 = 10^3) has the lowest accretion rate. Over 1 Myr, the authors calculate that this case contributes a total of only 0.1 Earth masses of pebbles to a rocky core in the disk, not nearly enough to help it grow to the 5+ Earth masses needed for it to become a gas giant. In contrast, the medium wind case contributes 56 Earth masses, more than enough. The red dashed line shows the accretion rate from a previous study with no winds. Adapted from Fig. 4 of the paper.

Fortunately, pebbles can still be excellent catalysts in other cases, including some with strong magnetic winds. For example, if the total accretion rate onto the star is higher (which would imply strong turbulence in addition to strong winds), pebbles are still effective at aiding cores in growing large enough to eventually become gas giants. These higher accretion rates are preferentially found around younger stars, which might suggest that pebbles are better at solving the mystery of gas giant growth for cores that grow earlier on in a young star’s lifetime.

All in all, disks with strong magnetic winds and low accretion rates may prevent pebbles from helping Jupiter-sized planets grow, supporting observational evidence that these planets may be rare. That is all the more reason to be thankful that the Jupiter-sized planet in our solar system is there to make our lives better.