Why is Mars so small?

Our neighboring planet Mars is a lot smaller than the Earth. We all wish Mars were habitable today so that taking interplanetary vacations would not be so lonely and our alien invasion movies could market themselves as “based on a true story.” If Mars were as large as the Earth (instead of half our radius, and one-tenth of our mass), it may have been able to attain a heavier atmosphere and sustain a strong magnetic field, two features of Earth that keep our planet habitable and could have also made Mars habitable. Intriguingly, the simplest inner planet formation models predict that Mars should be bigger than it is in reality, leaving many fictional inhabitants of Mars like J’onn J’onzz to be angry over the fact that their home planet is not habitable enough for them to actually exist.

Drążkowska et al., the authors of today’s paper, believe this discrepancy may be due to how planet formation models are typically developed. Most models that build planet-sized objects start out with planetesimals (10 to 100 km-sized) instead of the dust particles (cm-sized or smaller) that are needed to create these planetesimals to begin with. Since these models do not build planetesimals, they do not know where to start them out in their simulations. If they assume a uniform radial distribution (the most basic thing to do), the planets that form at Mars’ location in the solar system are close to Earth-sized, which is way too big!

Drążkowska et al. ask: Does starting a planet formation model with much smaller dust particles create a non-uniform distribution of planetesimals that is prone to making a Mars-sized planet at Mars’ location in the solar system?

Bridging the small-scale with the global picture

Most models do not build up planets all the way from dust particles because turning dust into the intermediate planetesimals is not straightforward.

Dust particles can only grow above meter-sized by clumping together, a process that requires far too high of a resolution to be simulated over the entire disk. Instead, this clumping process is simulated locally in a small 3-D box covering only ~0.01 AU of a ~100 AU radius disk, and ~10° of a 360° ring. These simulations can capture how the dust grows, but not how it drifts inward towards the star due to gas drag.

Drążkowska et al. improve on previous models by globally tracking both how quickly dust particles drift inwards, and how quickly they grow from micron-sized to the meter-size barrier. They then assume these dust particles can clump together into planetesimals if they reach both (1) a large enough size and (2) a high enough concentration, values that were determined by local simulations in previous work.

First, the authors develop a simple model where they evolve the dust particles in the disk without including the effects of the dust on the gas. (Figure 1 shows the evolution of these particles.) In this case, they find that the dust drifts inwards into the star too quickly for any planetesimals to form. 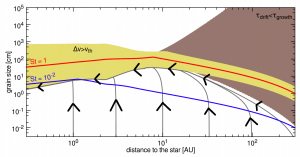 Figure 1. Tracks for dust particles that start at different distances to their star, for an example disk. Particles start small, then follow the arrows. They will grow until they reach the meter-size barrier (the yellow region). Once they cannot grow anymore, they drift inward. If the dust is allowed to grow above the blue line, it may be able to clump together to form planetesimals, provided that the dust concentration is also high enough (see Figure 2 below).  Adapted from Fig. 1 of the paper.

However, the authors note that the gas evolution should not be separate from the dust! When dust clumps together, it weakens the effects of gas drag, thereby slowing down the time it takes for the dust to drift inwards. They include this effect in a second set of models and find that it creates one huge dust pile-up in the inner disk. 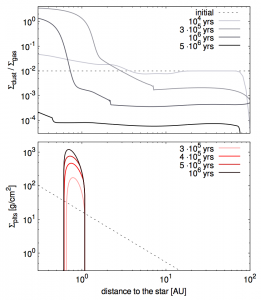 Figure 2. Top: Dust-to-gas ratio as a function of distance over time. This ratio starts at 0.01 everywhere and needs to reach 1.00 locally to form planetesimals. After a combination of drift and growth, this happens near 1 AU after 300,000 years. Bottom: The resulting planetesimal annulus over time. The lowest density of planetesimals occurs near the edges, suggesting planets that form near the edges should be less massive than those that form near the center.

Ultimately, this dust pile-up can reach high enough concentrations to form planetesimals inside an annulus between roughly 0.4 and 1.1 AU (see Figure 2). With different parameters (such as the initial dust-to-gas ratio), the outer boundary can extend to 3 AU, large enough to encompass all four rocky planets in our solar system.

How big should Mars be?

Inside of these annuli, there is always a higher density of planetesimals towards the center, and a lower density of planetesimals towards the edges. As a result, the planets that form towards the middle of the annulus (like Venus and Earth) should end up bigger than those that form near the edges (like Mercury and Mars), which is consistent with the sizes of the rocky planets in our solar system. This supports the reality we live in where Mars is smaller and much less habitable than Earth, and J’onn J’onzz does not exist.

Bonus: What about the outer planets?

Wait a minute! These authors modeled an entire disk and found that planetesimals only form in the inner disk. Where do the outer gas giant planets like Jupiter come from then?

The authors start their models with a smooth disk, even though real disks are not necessarily as smooth. They can also have pressure bumps that trap dust in the outer disk before it gets to the inner disk, creating additional annuli of planetesimals further out at these bumps. These planetesimals will then merge to form planets, just like in the inner disk.

An important point to take away from this is that the even though planets can form in most systems, they cannot just form at any distance from their star. Since the conditions required to form planetesimals are highly specialized, planets can only form at very specific locations in a disk, which are determined by the disk’s properties.