Today’s astrobite combines two independently fascinating topics for a very interesting result, machine learning and fast radio bursts (FRBs). The field of Machine Learning is moving at an unprecedented pace with fascinating new results. FRBs have entirely unknown origins and experiments to detect more of them are gearing up. So let’s jump right into it and take a look at how the authors of today’s astrobite got a machine to identify fast radio bursts.

Let’s begin by introducing the technique and machinery the authors employed for finding these signals. The field of machine learning is exceptionally hot right now, and with new understanding being introduced almost daily into the best machine learning algorithms, the diffusion into nearby fields is accelerating. This is of course no exception for astronomy (radio or otherwise), where datasets grow to be extraordinarily large and intractable for classical algorithms. Enter the Convolutional Neural Network (CNN). The go-to machine learning algorithm for understanding and prediction on data with spatial features  (aka images). And how does one of these fancy algorithms work? Well a basic starting point would be that of a traditional neural network, but I’ll leave that explanation to someone else. A neural network can take in few or many inputs, but they don’t necessarily have to be spatially related to each other, as opposed to a CNN which is well suited for images. (Note: you can also have 1d or 3d CNNs) . These images of course have features, those of which when combined are important for identifying what is in the image. Take for example in Figure 1, a dog has features such as floppy ears, or a large mouth with a tongue protruding. A CNN learns part or all of these features from a provided training dataset with a known ground truth, like in the Figure 1 case where a prediction can be a dog, cat, lion, or bird. These features are learned at varying spatial scales as the input images are successively convolved over, and the prediction is compared to its known label with any corrections propagated backwards to update those features. This latter step is the training part, which you might notice is the same process as a non-convolutional neural network. Thus armed with this blazingly fast classifier, we can move forward to understanding what we’ll be predicting on.

Figure 1: An example of a convolutional neural network. An input image is sequentially convolved over through several convolutional layers, where each successive layer learns unique features, which after training, are ultimately used to make a prediction based on a set of labels. Taken from https://www.kdnuggets.com/2018/06/topological-data-analysis-convolutional-neural-networks.html. 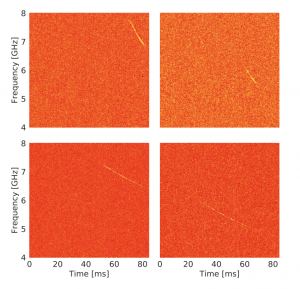 Figure 2: Simulated FRB pulses in Green Bank Telescope (GBT) radio time-frequency data. Pulses are simulated with a variety of parameters for the purpose of making the CNN as robust as possible. Figure 1 from the paper.

We’ve covered FRBs on astrobites in the past (1, 2, 3), and with each new post we seem to be getting closer and closer to finding the origin of these mysterious radio signals. A quick intro to FRBs is that they are radio bright millisecond bursts seen in time-frequency radio telescope data. These bursts have unique features which set them apart from other radio signals and will be important for understanding how the authors developed an FRB training dataset for the predictions in their paper. These features consist of a dispersion measure (DM), time of arrival (TOA), amplitude, and pulse width (there are more, but I’ll highlight these as being the most important characteristics). DM is one of the more interesting features of an FRB, as this is what indicates that FRBs are cosmological. The DM is measured from the dispersion of the signal in time and frequency as it traveled through an ionized medium, which in this case is the intergalactic medium. This is that curved trait seen in Figure 2 which delays the signal to later times when moving to lower frequencies. TOA is when the signal arrived in the observations, amplitude is the flux density of the signal, and pulse width is the width at 10% of max amplitude.

Using all of these characteristics to define a training dataset, the authors simulated many different types of FRBs, all with their own unique values. This is important because having a large robust training dataset means you’re more likely to have a neural network capable of robust predictions.

Putting the CNN to work

We now have all the components, a convolutional neural network, a robust training dataset, and a monumental amount of Green Bank Telescope (GBT) data. The authors look to probing archival data of the now pretty well known FRB 121102, which has a history of being a repeating FRB. This means that FRB 121102 is an amazing resource for understanding FRBs because we can take many measurements. 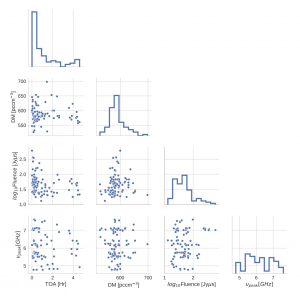 Figure 3: Distributions of the various features for the discovered FRB 121102 pulses from the GBT archival data. Understanding how these parameters relate to each other can give hints to the nature of FRB 121102.  Figure 4 from the paper.

Using several hours of GBT archival data the authors set the CNN to work, by predicting to see if there are additional FRB pulses from FRB 121102 that may have gone overlooked due to the signal being weak or just plain being missed due to the amount of data. They successfully find 72 additional pulses from FRB 121102! And interestingly enough, more than half of these newly discovered pulses happened within the first half-hour of this dataset. This brings the total tally, including the older signals, to 93 FRB pulses.

The additional detection and measurement of these pulses is certainly important. Like we’ve stated in our past astrobites, the origin of these bursts is almost completely speculative and we need to build up as many measurements as we can to either rule out or constrain the potential cosmological sources. Having a repeating FRB with which we can start to collect measurements, like the distributions seen in Figure 3, is fantastic for understanding the FRB’s environment which should affect these parameters. Hopefully with the continued development of these CNNs and other machine learning techniques, we’ll see an explosion of FRB detections.