Fast Radio Bursts more commonly known as FRBs, have been a hot topic in recent years. These loud bursts of radio emissions appear in radio observation data at seemingly random times from random positions on the sky (see Fig. 1). Ever since the first FRB was found in archival data from the Parkes Observatory in Australia by Duncan Lorimer and his undergraduate student David Narkovic, we’ve seen an explosion in searches and resources devoted to finding more FRBs. The initial discovery of FRBs was highly scrutinized because unfortunately even astronomers can make mistakes. As of today, radio astronomers are trying to collect as much data on FRBs as possible to constrain all of the hypothesized origins of these extragalactic bursts of radio emissions.

Transient signals in our Radio Sky

FRBs are typically bright (high signal to noise), short lived (bursts on the order of milliseconds), and have a characteristic dispersion in frequency (meaning that they exist across multiple radio frequencies; an example of this can be seen in the Lorimer Burst). This dispersion in frequency is one way that can tell us that FRBs are not terrestrial , because it shows that the radio signal passed through a cold plasma, aka the Intergalactic Medium (IGM). This dispersion of an FRB signal can be quantified by the dispersion measure, DM. This relationship can be seen below, where

is the dispersion constant,

the end observing frequencies, and 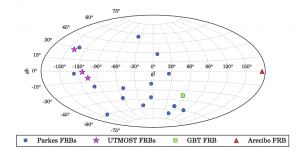 Figure 1: FRB locations in galactic coordinates discovered by the Parkes Observatory, Green Bank Telescope, Arecibo, and UTMOST. These FRBs are not seen to be localized to any one region of the sky. The majority of detections are seen in the Southern Hemisphere as both Parkes and UTMOST are located in Australia.

This quantity can also help us understand the properties of the IGM that the signal passed through, as DM can tell us about the electron density along its path. Now that we know the typical features of an FRB we can understand the type of instrument it takes to detect one. We need a radio telescope that has both high frequency and time resolution, and preferably one that has a lot of collecting area (this will translate to a higher sensitivity). This brings us to the radio interferometer used by the author’s of todays astrobite, the upgraded Molonglo Observatory Synthesis Telescope, or UTMOST. These upgrades allow for the improved detection of FRBs and coupled with the core MOST part of the telescope it has an ~ 8

of collecting area. This means that UTMOST is pretty ideally situated to detect and survey for FRBs, and as we’ll now find out has already begun its job.

Figure 2: The 3 FRBs seen in the UTMOST interferometric data. Each one is seen as a burst across only a few ms and has a fairly high signal to noise compared to the background.

Looking for FRBs isn’t easy, as can be seen from Figure 1, which demonstrates that there are no particular regions of the sky where they can be found. So being able to observe as much of the sky at any given moment can be extremely important. Our astrobite today highlights the first ever FRB detection in an interferometer (…actually the first 3!) over the course of 180 days of observing. The 3 UTMOST FRB detections can be seen in Figure 2, which are named FRB 160317, FRB 160410, and FRB 160608 (FRB naming convention is simple, it’s just FRB YYMMDD). In these initially detected FRBs they find the very characteristic burst width of 21 ms, 4 ms, 9 ms and dispersion measures of 1165

respectively. All three of these FRBs have DMs that are significantly higher than the dispersion you could expect from our own Milky Way (approx. 10-100

), and thus the authors suggest that they must be from beyond our own galaxy. Additionally by extrapolating these 3 detections at the frequency of 843 MHz, they calculate that there should be 78 FRBs per day visible across the whole sky. This translates to approximately 0.02 FRBs per day when using UTMOST (due to it’s field of view). The all-sky FRB rate found with these 3 observations also goes counter to some of the most recent statistical understanding, as they appear to be almost a factor of 2 more than expected in the low frequency range. They suggest as a possible solution in light of these new detections that FRBs may exhibit a steeper spectral index than previously thought.

In addition to UTMOST in the Southern Hemisphere, the Canadian Hydrogen Intensity Mapping Experiment (CHIME) is currently being built in the Northern Hemisphere. While CHIMEs’ main purpose is the mapping of the 21cm cosmological signal it might be fit for FRB searches giving us an eye on the sky in the north. The current constraints on FRBs are still very much in their infancy, but with these newly minted radio interferometers (HIRAX too!) with much larger fields of view I think we can declare FRB hunting season open. Increasing the number of detections and bolstering our statistics of these extragalactic events will mean that we can eventually put the question of what causes an FRB to rest.