Fast radio bursts, or FRBs, are a newer and somewhat mysterious phenomenon in radio astronomy. This paper details how the authors used a new instrument called CHIME/FRB to observe and put new constraints on FRB 121102, one of the few FRBs known to repeatedly send signals.

What is an FRB anyway?

FRBs were first discovered in 2007 in archival data from the Parkes Observatory in Australia. FRBs are characterized by very short—on the order of milliseconds—but very strong signals emitted in radio wavelengths. As of late January 2020, there have only been 110 verified FRBs. Of these 110, only 9 FRBs have been found to repeat, so it’s hard to pinpoint what their sources might be, or if they’re even all caused by the same mechanism (your microwave oven has been ruled out, but aliens have not). It is difficult to localize such short signals from just one detection since A) astronomers don’t have much time to work with and B) there can be multiple stars, galaxies, etc. in the same general direction, which makes it hard to determine exactly which object is the source. So far, only two FRBs have been well-localized: the non-repeating FRB 180924 and the hero of this story—besides the researchers, of course—FRB 121102.

In this paper, the authors discuss how they used the new CHIME/FRB detector and data pipeline to capture data for FRB 121102 CHIME, the Canadian Hydrogen Intensity Mapping Experiment, is capable of taking highly sensitive radio data covering half the night sky, which is perfect for trying to detect large numbers of FRBs. The authors looked at CHIME/FRB data – a project that takes advantage of CHIME’s detection capabilities and alerts astronomers to potential FRB detections in real-time – from July 25, 2018 to February 25, 2019 during the instrument’s testing and calibration phase, with some gaps in observation due to technical difficulties (a feeling we can all relate to in our daily lives). They estimate that FRB 121102 was within view for around 11.3 hours of this time. A signal from FRB 121102 with a signal-to-noise ratio of 23.7 was detected and saved by their pipeline on November 19, 2018. In their analysis of the outburst, the authors focused on the shape of the signal and its dispersion measure, the measurement of how much a signal is spread out along the path that it takes to Earth, which is determined by the time the signal starts and stops. They also used this opportunity to learn more about CHIME/FRB’s sensitivity since it was still in its calibration phase. Using this data, the authors were able to discover three key points: 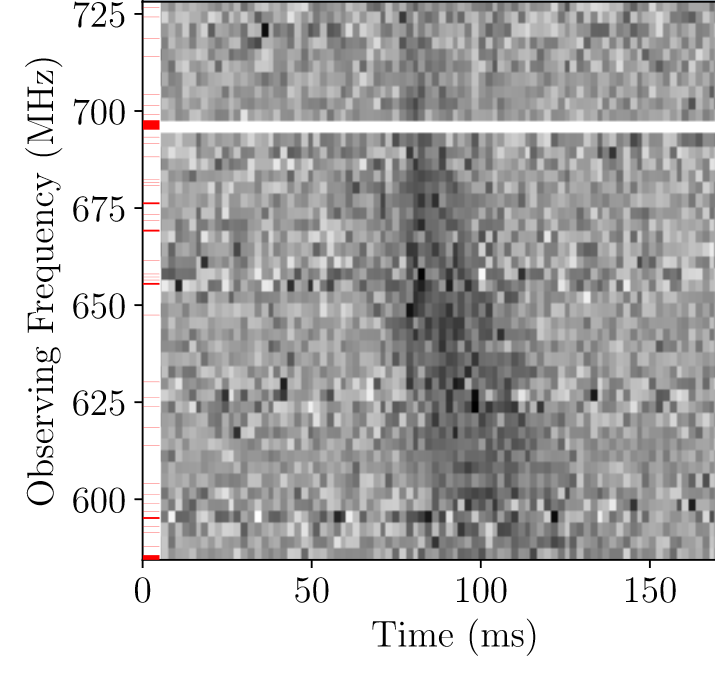 Figure 1: A plot of the pulse’s detected frequencies versus time. The linear drift rate is determined by the average change in frequency over the change in time. In this case, it’s roughly (600-720 MHz)/(110-80 ms), which gives the -3.9 ±0.2 MHz/ms number found by the authors. Adapted from Figure 5 of the paper.

Although this data is only for one observation of one FRB, the authors’ three main points are key not only in understanding FRB 121102 but in understanding FRBs as a whole. The lower frequency gives a better idea of exactly how low the frequencies of FRBs can go (can you beat them in limbo?). The dispersion measurement has several implications for the possible sources of FRBs. Such a large change in the dispersion measurement shouldn’t be caused by matter within the Milky Way, so the change is likely caused by something occurring around the source. It helps rule out potential sources like a magnetar model because a magnetar with such a large change in dispersion measurement should be detectable at higher frequencies than 600 MHz. However, the increases could just be caused by material passing between us and the source. If so, a decrease of similar magnitude should occur for another FRB eventually.

Though this new detection of FRB 121102  doesn’t tell us all there is to know about FRBs, it at least gets us a little bit closer. In addition to the information above, we also gain a more general idea of where FRBs originate. The fact that it is a repeater alone shows FRBs either are not caused by destructive events or have multiple progenitors. Hopefully this new information gives us one more piece in the puzzle of FRBs, and new instruments such as CHIME will expand our detections enough to learn even more in the near future.

I'm a fourth year grad student at Louisiana State University. I study hot Jupiter exoplanets in the Galactic Bulge. I am originally from Tennessee and attended undergrad at Christian Brothers University, where I studied physics and history. In my "free time," I enjoy cooking, hiking, and photography.