Although Fast Radio Bursts (FRBs), brief millisecond flashes of extremely energetic radio emission, were first discovered over a decade ago in 2007, only in the past few years has the community seen a revolutionary increase in the number of detected FRBs. In early March, the known total number of FRBs was at least 65, two of which were repeating sources, and one of which had been localized to a host galaxy. The number is now at least 85 known FRBs, with nine repeaters announced this past August (eight new sources and one previously single-burst source), and two more localized FRBs announced this past summer. (See this astrobites for more on one of them!)

Beyond their mysterious origins, FRBs have also captured the attention of some scientists because of their possible applications to cosmology. FRBs have large observed dispersion measures (DMs), which means that the lowest energy radio photons from the burst are observed some time after the most energetic photons, and the time depends on the number of free electrons the photons travel through. Free electrons can be found in the intergalactic medium (IGM), circumgalactic medium (CGM), Milky Way, and the host galaxies of FRBs. FRBs that are very far away –– at cosmological distances –– may have a “cosmic DM” with contributions to the DM from the IGM and the CGM.

If the redshifts (z) of the FRBs are measured, possible only if they are localized to a host galaxy, then a relation between cosmological DM and redshift, DM(z), can probe cosmological parameters. The DM(z) relation could also shed light on the “missing baryon problem” by constraining the fraction of diffuse, ionized gas –– baryons –– in the IGM. These problems can be explored with DM(z) because DM as a function of z can provide an estimate for the baryonic matter in the IGM and CGM between us and the source as a function of redshift (and the density of baryonic matter is a cosmological parameter). We don’t have a lot of DM(z) data from FRBs yet, but it’s always useful to think ahead and characterize what kind of science can be done if the data were there. That’s where simulations, and today’s paper, come into play.

Simulating Our Way to Cosmological and Diffuse Gas Fraction Constraints

In order to study what cosmological parameters might be best constrained, and how well the missing baryon problem can be reduced by FRB data, the authors of today’s paper simulate catalogs of mock FRBs out to redshift z ≃ 3. They then combine the mock DM(z) data, illustrated in Figure 1, with current cosmological constraints from the Planck 2016 data release: measurements of the cosmic microwave background (CMB), baryon acoustic oscillations (BAO), Type 1a supernova (SNIa), and the Hubble Constant (H0), which they combine and call the CBSH parameter values. 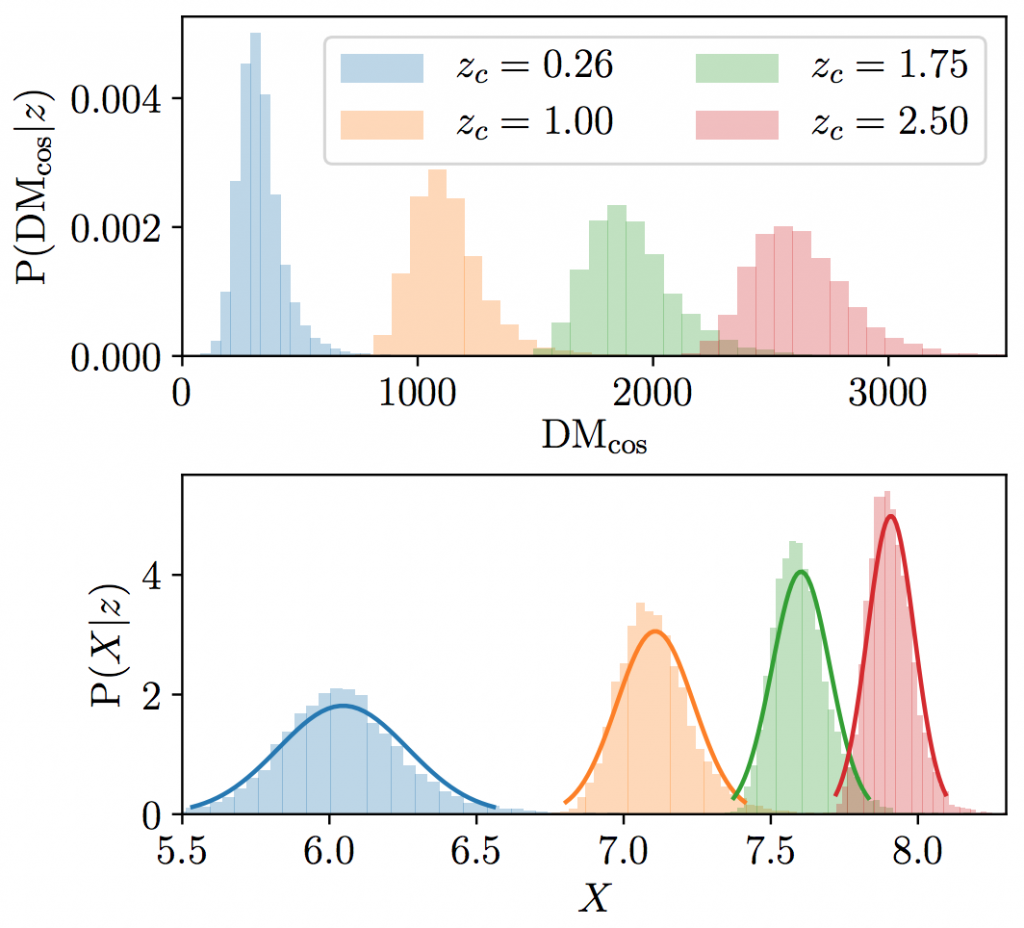 Figure 1. Results from modeling the DM from the simulations. The different colors represent various redshift bins (Δz = 0.03), and are labeled in the legend with the central redshifts of the bin. The top panel shows the probability distribution function of an FRB’s cosmological DM, given its z. Due to the log-normal shape of the distribution, they fit Gaussian distributions to the log of the DM (with a constant offset), defined as X and shown in the lower panel. The best-fit lines are in solid colors. (Adapted from Figure 1 in today’s paper.)

A New Generation of FRBs and Cosmological Studies

There is a new generation of radio telescopes that already have, or can, detect FRBs: Canadian Hydrogen Intensity Mapping Experiment (CHIME), Hydrogen Intensity and Real-time Analysis eXperiment (HIRAX), Five-hundred metre Aperture Spherical Telescope (FAST), Australian Square Kilometre Array Pathfinder (ASKAP), Karoo Array Telescope (MeerKAT), Murchison Widefield Array (MWA), Deep Synoptic Array (DSA), and in the future, the Square Kilometre Array (SKA). With an increase in localization efforts of FRBs, DM(z) data (real, not simulated) can be obtained that could tell us about the makeup of our Universe –– especially the diffuse gas fraction and the “missing baryon problem.” In other words, FRBs, which are only milliseconds long, can tell us about cosmological mysteries that go back billions of years. With the new generation of radio telescopes, these studies might be just around the corner!