Title: Yes, Aboriginal Australians Can and Did Discover the Variability of Betelgeuse

Stargazing is a global phenomenon. Despite the preponderance of Greek mythology in the modern constellations, ancient civilizations from China to Polynesia practiced early astronomy and developed their own mythologies. One culture with a particularly rich history of astronomical observation is that of Aboriginal Australians. Earlier this year, a researcher at the Monash Indigenous Studies Centre published a paper arguing that various Aboriginal groups correctly identified variable stars and incorporated their periodic behavior into constellation lore. Today’s paper, by Bradley E. Schaefer, focuses on one of the stars discussed in that publication, Betelgeuse, and provides additional evidence that Aboriginal astronomers discovered its variability. 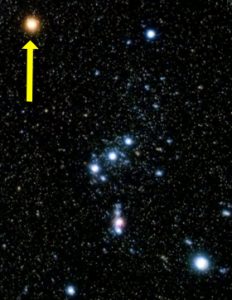 Figure 1. Betelgeuse is noted with the yellow arrow in the picture of Orion above. Note its brightness and distinct red color. Image credit: JPL

Betelgeuse is a red supergiant star located in the Orion constellation. It is over eight million years old, is around 12 times more massive than the Sun and almost 1000 times larger in radius, and is around 700 light years away. If you observe Orion in the northern hemisphere, his bright red shoulder is Betelgeuse (see Fig. 1)! As a red supergiant, Betelgeuse pulses leading to significant variations in its brightness. As the eleventh-brightest star in our sky, Betelgeuse’s apparent magnitude varies between 1.2 and 0.3 over several hundred days (that is almost a 230% difference in brightness).

How detectable is that change to the naked human eye? As Schaefer points out, Betelgeuse has a large advantage in its detectability: the stars around it (Fig 2). Several bright stars are near Betelgeuse, including Rigel (0.12 apparent magnitude), Procyon (0.38), and Pollux (1.14).  Schaefer argues that humans can easily compare the brightness of two stars if their angular separation is less than 60 degrees (the moon is about 1 degree in angular size). All three of those comparison stars are less than 40 degrees away from Betelgeuse. It would therefore be relatively easy for dedicated ancient astronomers to note that Betelgeuse was brighter than Procyon one year but fainter than Pollux another. Schaefer claims “That is the sort of comparison that humans are good at,” to strongly argue that the observation was possible. 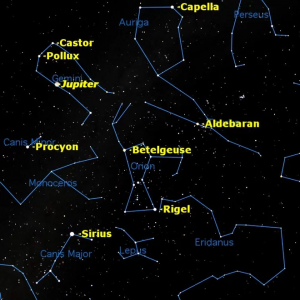 Star field of Betelgeuse indicated its significant nearby neighbors. In particular, Rigel, Polllux, Capella, and Procyon are all excellent comparison stars. Aldebaran is another variable star that may have been observed by Aboriginal Australians. Image credit: space.com

Just because Betelgeuse’s variability could be observed does not mean it was, however. As Schaefer points out, observations of the variability by Western astronomers were not recorded until Sir John Herschel reported it in 1836. The original paper that inspired today’s letter provides some evidence in the form of folklore from the Kokatha people in Southern Australia; they describe Orion as a hunter named Nyeeruna whose club (Betelgeuse) is alternately filled with “fire magic” and extinguished over the course of a struggle. Schaefer argues that such a manifestation of astronomy in mythology is completely feasible, drawing comparisons to knowledge of other astronomical events that persisted through oral tradition such as solar eclipses as omens or the creation of the Chinese calendar a millennium before it was formally written down. Observing Betelgeuse’s changing brightness would only require a year of careful stargazing, and the Aboriginal people are already known for exhaustive stargazing. Given how frequently Betelgeuse varies, the transfer of this information could easily happen over short enough timescales for the knowledge to persist without a written record.

Ultimately, Schaefer claims that the discussion is already settled. In today’s paper, the ethnographic documentation that includes descriptions of Nyeeruna is highlighted as direct positive evidence. In those documents, Aboriginal people directly state that Betelgeuse varies in brightness. According to Schaefer, this definitely proves that Aboriginal people were aware of Betelgeuse’s variability, even if they did not classify it in that language or create a written record.

Throughout today’s paper, Schaefer, an expert on ancient astronomy, strikes a careful balance. Overall, Schaefer is often dismissive of other claims of ancient discoveries, arguing that a lack of rigor has led to erroneous claims. The paper simultaneously extols the capabilities of past civilizations, pointing to observers such as Ptolemy and al-Sufi who accurately described atmospheric extinction, and stresses the need for caution when exploring past accomplishments. At one point, Schaefer explores evidence that Aboriginal Australians observed supernovae. Schaefer disparages work that relied on ambiguous rock art as sufficient proof but lauds one paper that connects supernovae to significant lore events. Against the backdrop of such a stern critique of the field, Schaefer still presents a compelling argument that Betelgeuse’s variability would have been observed by Aboriginal Australian people. Such acknowledgements are fundamental to recognizing the stunning astronomical capabilities of ancient people.