BepiColombo blasts off in pursuit of Einstein

On the 20th October, BepiColombo blasted off from Kourou on a five-year voyage to Mercury. BepiColombo is a joint mission between the European Space Agency (ESA) and the Japan Aerospace Exploration Agency (JAXA), which aims to explore the smallest and least-studied planet of the inner solar system. It’s made up of two science orbiters which will be carried to Mercury by a transfer module, harnessing solar electric propulsion and gravity assist flybys to place them into orbit around Mercury in 2025. BepiColombo will need to withstand pizza oven temperatures (up to 450°C/840°F), as well as battle against the Sun’s enormous gravitational pull in order to successfully orbit the Sun’s nearest neighbour. 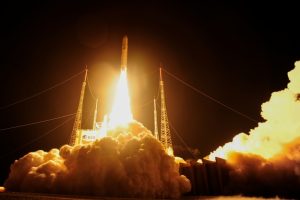 NASA’s Messenger mission was the last spacecraft to venture so close to the Sun, and while many questions were answered with the 4 years of observations, many more were opened up. BepiColombo is now off to hunt down those answers. Whilst there are many science goals concerning Mercury’s geology and magnetosphere — for example why is it shrinking?! — the authors of today’s paper explain that BepiColombo can also put Einstein to the test (again).

One of the original validators of Albert Einstein’s theory of gravity, General Relativity, was Mercury’s movement around the Sun. For a long time, observations showed that Mercury’s perihelion (see figure 2) was advancing around the Sun more than it should have if only the movement of surrounding planets were having an effect according to Newtonian gravity. General Relativity accounted perfectly (or nearly perfectly — we’ll find out), for the extra shift of 43 arcseconds per century, and put to rest the confusion around the strange phenomenon. Even a new planet Vulcan had been dreamt up to try and explain the mysterious movement.

However, as good as our measurements are of Mercury’s perihelion advance, there is still room for error. Today’s paper shows that there is another relativistic effect on Mercury’s movement around the Sun due to the effect of a third body, for example another planet, entering the picture. Including a third body in the calculations causes the gravitational potential of the Sun to be perturbed ever so slightly, and hence the movement of Mercury is altered. The correction is tiny — of the order of a few parts in a million relative to the 43 arcsecond per century advance. However, BepiColombo is all set to be able to achieve that level of precision measurement. 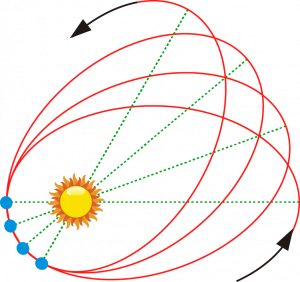 Figure 2: The blue dots represent how Mercury’s perihelion – the point of closest approach to the Sun – precesses around the orbit. Image found here.

BepiColombo will orbit Mercury for one year, and will hopefully determine during that time whether the 1 part in a million correction is there. If it is, General Relativity lives to fight another day, if it’s not, we may need to think up a way of modifying the theory to account for this alteration.

General Relativity has stood up to all of the tests that have been thrown at it for the last 100 years, and most recently received further validation due to the gravitational wave detections that were predictions of this long-standing theory. The expectation is that BepiColombo will prove General Relativity even more right, and whilst that may not be as exciting as needing to rewrite one of physics’ most accepted theories, the fact that we’re now able to put it to the test to accuracy levels of a few parts in a million is a feat in itself. BepiColombo is well on its way to Mercury now, and we’ve got a 7 year wait before the results are in.