Title: Observing the influence of growing black holes on the pre-reionization IGM

Cosmologically important phenomena are typically discussed on the scales of gigaparsecs (Gpc); to give you some idea of the sizes involved, one Gpc could fit approximately 33 thousand Milky Way galaxies end-to-end. That’s a pretty crazy scale and with that in mind today we’ll gain an understanding for how astrophysical events beginning on the order of parsecs can have far-reaching affects cosmologically.

The cosmological period prior to the reionization of the Universe’s hydrogen is typically described as being the cosmic dawn. This stage in the history of the Universe is marked by the formation of the first stars and galaxies. But it doesn’t end there, connecting these large structures throughout the Universe is the Intergalactic Medium (IGM). The IGM during the cosmic dawn consists of mostly neutral hydrogen, and compared to galaxies, is much less dense (10^-27

). The UV radiation from these early stars and galaxies are what most astronomers and cosmologists believe led to reionization. Put simply, this ionizing radiation extended symmetrically from these sources and over time these regions of reionized IGM began to overlap leading to complete reionization. While this is our current `best guess’, cosmologists typically wonder: ‘What roles do other structures play during this period?’ One type of galaxy of interest are those containing Active Galactic Nuclei (AGN), which are galaxies with a very dense core with a supermassive black hole (SMBH) at its center that is accreting matter. These AGN are extremely luminous and can produce a lot of X-ray and UV emissions. What we’ll be exploring today is how these SMBH influence the surrounding regions.

The very first black holes were most likely few and far between and should have mass ranges several orders of magnitude less than what can be observed today (but in light of new detections we may need to question this). This follows from the fact that for black holes to exist you need some form of already dense matter to collapse under extreme gravitational conditions. These conditions however weren’t as ripe during the cosmic dawn, as matter was just starting to clump together to form behemoth objects such as Population III stars. However the few structures that did begin to form, AGN, or more specifically quasars, were fueled by the type of early SMBHs today’s astrobite investigates.

SMBHs at the center of quasars affect the IGM through reionizing and heating of the gas. This is because as the SMBH accretes local matter hard non-thermal radiation is emitted. So how does the accretion rate of these early black holes influence the surrounding regions? We should expect there to be some relationship between the rate of matter accretion to the distance of influence.  Directly following from this, we should also be able to see how observable an object like this might be by using a radio interferometer. Luckily we have the authors from today’s astrobite paper to help answer this for us.

The authors model the accretion according to the above equation, which relies on the initial black hole mass,

which tells us how easily matter is converted to radiation, and the Eddington time-scale of

(read more here) . This is then related to the resulting ionizing luminosity which they assume to have a power law relationship, and eventually leads us to the ionizing radiation flux. 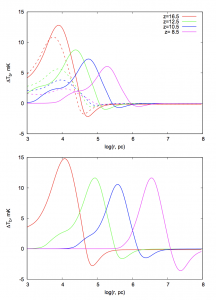 Figure 1: The relationship between brightness temperature and the distance of ‘influence’ of ionizing radiation plotted at several redshifts. The upper plot is for a

and the bottom plot for

These growing black holes are placed in a host halo of neutral hydrogen where the effects of the ionizing/heating front radius can be related to an observable differential brightness temperature,

. The brightness temperature being just the difference between the background Cosmic Microwave Background temperature and the neutral hydrogen 21cm line. Their results for a black hole with an initial mass of 300 solar masses starting at redshift 20 with the radiative efficiencies of

(lower) can be seen in Figure 1. They also compare a non-growing black hole (dashed) as a point of reference.

These distances convert to just about the correct angular scales that radio interferometers, such as LOFAR, might be able to probe, which is certainly an exciting prospect. This would be a huge achievement as being able to probe down to the kpc scales and link them to phenomena seen at some of the largest scales could provide us some much needed information on how the earliest black holes formed.