A change in the tides 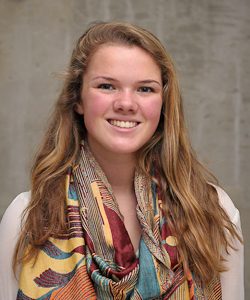 This guest post was written by Katie Harris, a Master of Space Studies student at the International Space University in France. She completed her undergraduate degree in Astrophysics at the University of Toronto, where she did research on infrared spectroscopy instrumentation and Bayesian statistics. She is interested in all things space and is currently working towards a career in space medicine and crossover technology development for medicine and astronomy.

In May 2016, the world was struck with sudden excitement over the discovery of the Trappist-1 system. At just 12 parsecs away, the system is host to several Earth-sized planets inside the habitable zone, which makes said planets prime candidates for harbouring life (see this bite and this one for more). The discovery of this neighbouring exoplanet system ignited the curiosity not only of astronomers and exoplanet scientists who had a new system to study but the general public who were excited to follow the search for possible signs of extraterrestrial beings.

However, as we peer more deeply into the dynamics of the system, the once idyllic scene of Trappist-1 is rapidly becoming more complex. The system is unique in that all the planets are very tightly packed, with the furthest out only having an orbital period of 12 days. While the questions of excess radiation and water loss have been well parsed, today’s paper calls attention to the role of planet-planet tides in the system.

The tidal strain ϵ on a body p scales inversely to distance cubed, and proportionally to the mass of the interacting object q. We are all familiar with the role of tides on Earth, which cause natural wonders like the Bay of Fundy. However, the tides on Earth are caused by the gravitational influence of the Moon and the Sun on Earth’s oceans (see Figure 1). These two bodies have the greatest effect, because the Sun is the most massive body in our system, and the moon, while not massive, is very close. 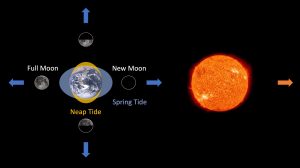 Figure 1: The main cause of Earth’s two tides is the Moon, but the Sun’s gravitational pull cannot be neglected. As seen above in this infographic, when the pull of the Sun and the Moon align (the blue and the orange arrows), the amplitude of tides on Earth increases, which causes a spring tide. When the gravitational forces are at right angles, the amplitude of tides on Earth is minimized, which is known as a neap tide. Image credit: Katie Harris.

While all objects in the Solar System (and indeed, everywhere in the universe) gravitationally interact, the tidal effects of the other planets in our system on Earth are negligible. That is not true for Trappist-1, where the planets are much closer together. Despite the insignificant mass of the planets compared to that of the host star, their proximity to one another means that they require further attention.

If planet-planet tides are strong forces on the Trappist-1 planets, it could have significant consequences for any hypothetical life on the planet. Lingam & Loeb (2018) suggest that stronger tides could have a positive influence on abiogenesis, biological rhythms, nutrient upwelling, and stimulating photosynthesis. So, while the inclusion of planet-planet tides might initially be a positive thing in terms of the Search for Extraterrestrial Intelligence (SETI) and finding alternative Earths, many important factors for determining the effect of tides, such as the spin states of the planets, are still under investigation, and may be a cause for pause before planning an interstellar trip.