A history of water loss in the TRAPPIST-1 exoplanets

Article: Temporal evolution of the high-energy irradiation and water-content of TRAPPIST-1 exoplanets 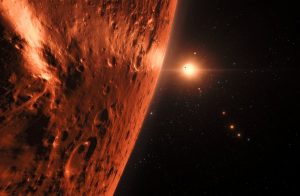 This artist’s impression shows the view from the surface of one of the planets in the TRAPPIST-1 system. Credit: ESO/N. Bartmann/spaceengine.org

In early 2017, people quickly turned their attentions to TRAPPIST-1, a seemingly run-of-the-mill M dwarf star in the constellation of Aquarius, owing to the discovery that it hosts seven exoplanets and of which several are inside its habitability zone (HZ). After a careful look at the ultraviolet (UV) spectra of the star during a planetary transit and out of transits, V. Bourrier and collaborators discovered a variability that could be traced to the history of water escaping from the TRAPPIST-1 planets.

Come for an experiment, stay for the puzzle

To judge the potential habitability of a world, we need to take into account several factors, such as the distance from the host star, and the presence and composition of an atmosphere. It is likely that planets that orbit M dwarf stars have their atmospheres eroded by stellar winds or UV radiation, and this can be a game-changer for habitability.

The escape of exoplanetary atmospheres has already been observed in gas giants orbiting close to their host stars by looking at the Lyman ɑ emission line at 1215.67 Å (in the UV region of the spectrum). When a planet transits its host star, it is possible that it will display an increased absorption feature in this line that persists after the transit, indicating the presence of a hydrogen cloud trailing the planet like a comet tail. In today’s bite, the authors report the observation of the transit of TRAPPIST-1c with the Hubble Space Telescope (HST) to look for such a signature of an extended hydrogen atmosphere.

The observations consisted of four parts: Visits 1 through 3 were out-of-transit, while Visit 4 was performed over 5 HST orbits during the transit of TRAPPIST-1c. In Figure 1 below, corresponding to Visit 4, we see that the flux on the redder side of the spectrum (positive velocities) is systematically higher than the reference flux (grey spectrum, a combination of Visits 1, 2 and 3), while the bluer side below -160 km/s is also higher than the reference. Furthermore, this feature is variable, which suggests that the shape of the line evolved from Visits 1 through 4. 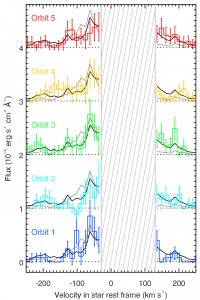 Figure 1. Lyman ɑ emission line in Visit 4, containing the transit of TRAPPIST-1c. The variation in this feature indicates an evolving line shape, which could be due to a system-wide cloud of neutral hydrogen around TRAPPIST-1. The hatched region contains contaminating emission from Earth and is ignored.

Planets enshrouded in the remnants of a long-gone past

The authors did not find evidence for an extended atmosphere around the planet TRAPPIST-1c. On the other hand, one explanation for the variability in the Lyman ɑ line is the presence of a complex system-wide cloud of neutral hydrogen, likely originated from the escaping atmosphere of several planets.

Since the TRAPPIST-1 planets have very compact orbits, they are under a significant UV irradiation from the host star; this radiation causes water molecules to break down, producing hydrogen and oxygen. Therefore, the presence of a system-wide cloud of hydrogen could indicate a history of water loss from the planets. In fact, the authors point out that the outer planets (d to h), which are inside the HZ, could have already been through the most intense phases of water loss, while planets b and c could be in a runaway greenhouse state, depending if they formed with enough water to do so.

Estimating how much water was removed from these planets is complicated because of uncertainties in their masses, the age of the system, and the amount of water during its formation. Taking into account the efficiency of water break down and the outgassing of water from the planetary mantles, Bourrier and collaborators estimate that planets b through g have lost more than 20 Earth oceans of water due to hydrodynamical escape (see Figure 2). However, they reinforce that this is an upper limit, owing to the aforementioned uncertainties and limitations of the estimates. 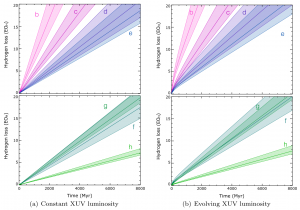 Figure 2. Upper limits for the cumulative amount of hydrogen lost (measured in Earth Oceans) for each planet in TRAPPIST-1 during the lifetime of the system. Left and right panels represent two different hypotheses for the high-energy luminosity of the host star.

Naturally, a more complete understanding of the habitability of TRAPPIST-1 and other systems will depend on further observational efforts to pin down the masses of the planets, monitor the high-energy spectra of the host star and look for water signatures in the lower atmospheres of the planets using infrared spectra. Further theoretical studies are also needed to evaluate the impact of geophysical processes and the role of magnetic fields in the escape of planetary atmospheres.

Disclaimer: In late September 2017 I will start collaborating with two or more of the authors of today’s paper, but I am not in any form involved with this particular publication.