Status: Submitted for publication in MNRAS, open access on arXiv

Dwarf galaxies are trickier than they appear. As their name suggests, they are basically small versions of regular galaxies. Their masses range between several million to several billion solar masses (for comparison, the Milky Way, which is a regular-sized galaxy, is thought to come in at approximately a trillion solar masses). They come in many shapes, including elliptical, spheroidal, and irregular, and they can be found either on their own (aka “field galaxies”), or orbiting larger galaxies or galaxy clusters (aka “satellite galaxies”; see Figure 1 for some examples of the Milky Way’s satellite dwarf galaxies).

Figure 1. From left to right, the Large Magellanic Cloud, Fornax, and Sculptor. All of the above are dwarf satellite galaxies of the Milky Way. In addition, Fornax and Sculptor both exhibit the bi-modal metallicity distribution discussed in today’s paper (credit: ESO).

But don’t let their size deceive you into thinking they are just cute little versions of their larger counterparts. They may be small, but they are nonetheless full of mysteries and riddles that challenge our cosmological models, our understanding of the nature of dark matter, and our assumptions about the Epoch of Reionization.

Questions like these make dwarf galaxies a hotbed of ongoing research, bringing together theoretical, computational, and observational astrophysicists to discuss and debate the latest discoveries. After all, who doesn’t love a good riddle?

Today’s paper explores yet another dwarf galaxy riddle: many of the observed dwarf galaxies (including two of the examples in Figure 1) have two distinct populations of stars, which can be easily separated in terms of both their spatial distribution and their metallicities (in astronomy, the word ‘metal’ refers to any element that is heavier than Hydrogen or Helium; typically, older stars are more “metal-poor” and younger stars are more “metal-rich”). One of the observed stellar populations in dwarf galaxies is both metal-rich (and therefore likely younger) and highly concentrated in the center of the galaxy, whilst the other is metal-poor (so probably older) and extends much further out than the metal-rich population. The riddle is, of course, what causes this segregation?

The authors of today’s paper turn to simulations to help understand what is going on. They begin by identifying 250 dwarf galaxies, including both satellite and field galaxies, in a set of hydrodynamical simulations of the Local Group. They then assess the probability density of the metallicity in each galaxy, to separate between galaxies that only have one population and galaxies that have two or more distinct metallicity populations. Examples of one-, two-, and three-metallicity population dwarfs can be seen in Figure 2.

Figure 2. The probability density of metallicities in galaxies with one (left), two (middle), and three (right) distinct metallicity populations. The metallicity is defined here as the log of the Iron-to-Hydrogen abundance ratio (Fe/H), normalized such that zero is equivalent to the iron-hydrogen ratio of the Sun. The red X’s represent the metallicity distribution peaks and the red squares mark the locations where the populations split (Figure 1 in the paper).

Having located the desired sample of galaxies in the simulations, the authors next track the evolution of these galaxies, focusing on events that may have triggered the formation of distinct stellar populations. Interestingly, they find three unique mechanisms – one common in field galaxies, one common in satellite galaxies, and one that affects galaxies in both environments:

1. Mergers: for 80% of the field galaxies, the authors traced the origin of the two different populations to a merger with another dwarf galaxy. The merger causes the existing stars in the galaxy to migrate outwards, while at the same time pulling in much of the available gas to the center of the galaxy. This sparks a burst of metal-rich star formation at the center of the galaxy. The formation and evolution of these segregated populations can be seen in Figure 3.

2. Pericentric passage: for 70% of the satellite galaxies, the authors noted a second episode of star formation when the dwarf galaxy first reached pericenter, or the point of closest approach to the galaxy it orbits. At pericenter, ram pressure compresses the remaining gas in the center of the dwarf galaxy, while at the same time stripping away the rest of the gas that is further out (see this astrobite for a great explanation of ram pressure). As a result, a second, metal-rich population of stars forms at the very center of the dwarf galaxy. This process is shown in Figure 4.

3. Interaction with a gaseous cosmic filament: The bi-modal metallicity distribution in the remaining dwarf galaxies (20% of field dwarfs and 30% of satellite dwarfs) formed as a result of crossing a cosmic filament. Just like the previous mechanism, crossing a filament is also accompanied by ram pressure that strips the outer gas and condenses the inner gas of the dwarf galaxy, triggering a star formation burst of metal-rich stars at its center. 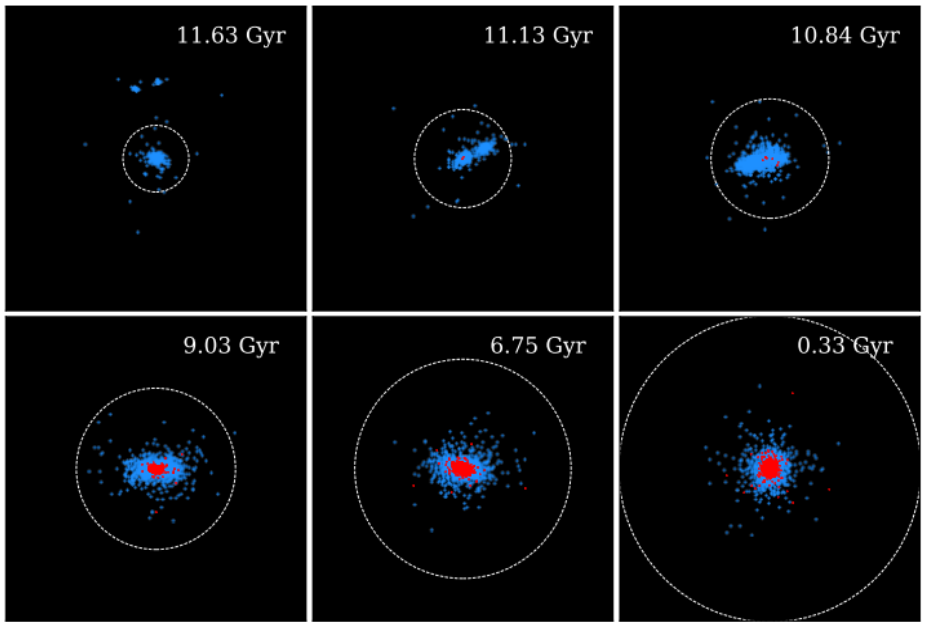 Figure 3. Formation of a second population of stars in a field dwarf. A merger occuring at 11 Gyr pushes the metal-poor stars (in blue) to larger radii, while triggering formation of a metal-rich population (in red) at the center of the galaxy. The white circle delimits the virial radius of the galaxy (Figure 6 in the paper). 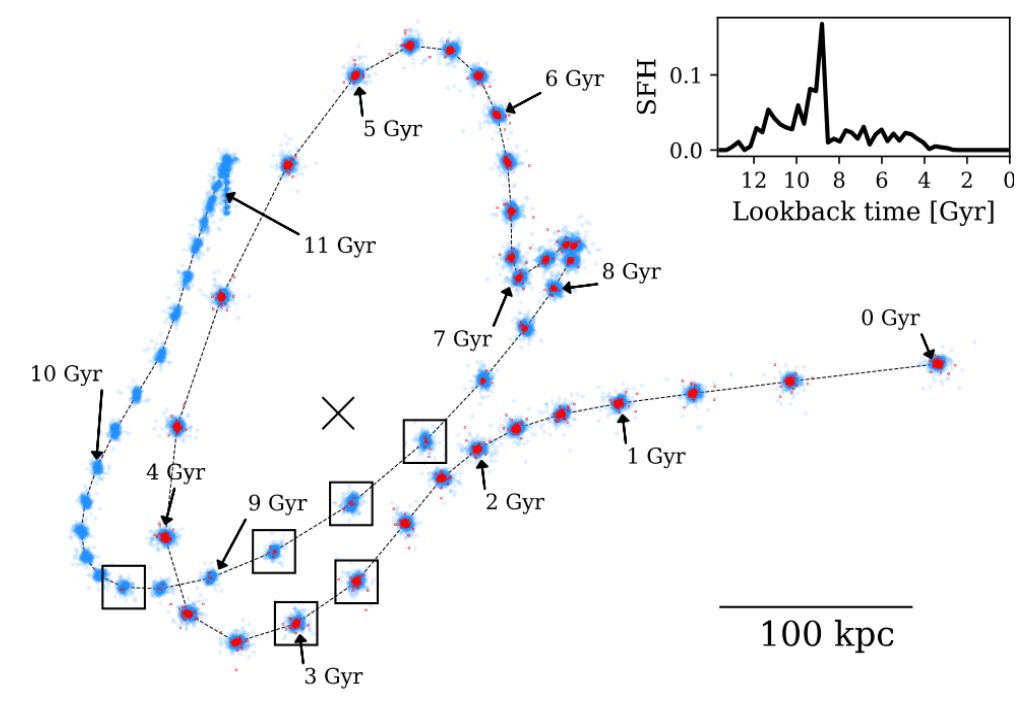 Figure 4. Formation of a second population of stars in a satellite dwarf as it orbits its host galaxy. The black X marks the location of the host galaxy. The three black squares between 9 and 8 Gyr indicate the first pericentric passage, at which point the second, metal-rich population of stars (in red) begins forming within the metal-poor population (in blue). The inset image on the top right shows episodes of star formation, with a clear peak between 9 and 8 Gyr corresponding to the pericentric passage described above. The irregular orbital path shown stems from changes in the potential of the host galaxy due to mergers, and from interactions of the dwarf galaxy with other dwarfs (Figure 10 in the paper).

Overall, this paper is a superb example of using hydrodynamical simulation to bridge between observation and theory. The three proposed solutions cover the vast majority of scenarios that lead to two distinct metallicity populations in dwarf galaxies. And yet, as the authors themselves point out, their investigation raises several new questions. Firstly, there is still the question of how to get more than two distinct metallicity populations (as seen in the rightmost panel in Figure 2). Secondly, the authors identify several characteristics that can help differentiate between dwarf galaxies that underwent one of the processes described above in the simulation. But can these characteristics provide the necessary clues to understand the actual formation histories of observed dwarf galaxies with two distinct populations?

Open questions like these serve as a helpful reminder for why dwarf galaxies are so much fun to study: every time a discovery is made, it sparks a new set of questions for astrophysicists to tackle.