Title: From Solar to Stellar Brightness Variations: The Effect of Metallicity

Have you stopped to ponder lately about just how incredibly stable our Sun is? Sure, it occasionally lets off powerful flares that can cause problems for us here on Earth, but compared to most other stars out there our Sun’s average energy output is remarkably—even anomalously—constant. A Sun that varied in brightness by even just a few percent over the years could have significant, potentially disastrous consequences on our climate or ability to grow crops. My previous post on Thanksgiving ended up with a title sounding like a leftover from Halloween, so it’s only fitting that my Christmas Eve post touches on being thankful for the extreme stability of our Sun. Today’s paper sheds some light on the Sun’s stability by using simulations to investigate the effects of changing various parameters in Sun-like stars.

Before we begin, it’ll be helpful to go over some background material. Many stars, including our Sun, go through a magnetic cycle. For our Sun it takes about 11 years on average and is also called the solar cycle. Over the course of one magnetic cycle the Sun’s magnetic fields get twisted up, and when they intersect the surface of the Sun they create two main kinds of phenomena that are relevant to this paper. Sunspots are areas on the Sun that appear darker than average because they’re cooler than the surrounding surface, while faculae are the opposite: they’re areas that are hotter than their surroundings and thus appear brighter than average.

Changing the amount of a star’s area covered by these features can change its overall brightness, and by measuring these brightness changes (plus other indications of magnetic activity) we can tell that lots of other stars also have magnetic cycles. Strangely, most other stars, even ones with similar levels of magnetic activity to the Sun, show much larger variations in brightness than the Sun does. Figure 1, from today’s paper, compares the state of the Sun between two extreme points in its magnetic cycle, and shows how even at these extremes the amount of energy received on Earth from the Sun varies by less than a single percent. 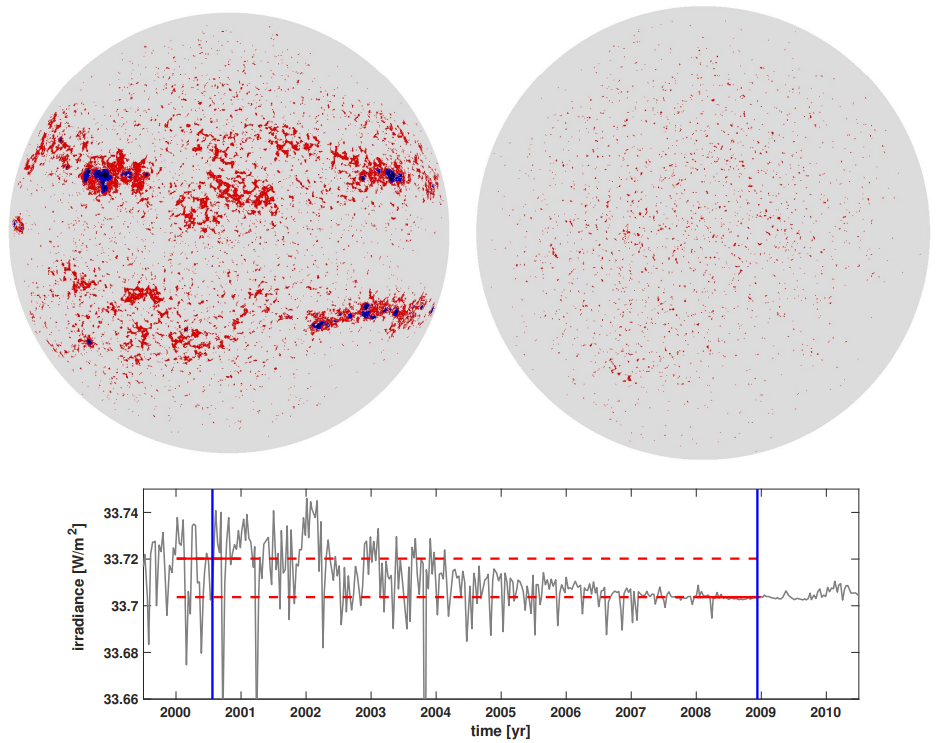 Figure 1: The Sun at both high and low points in its magnetic cycle. The left image is from July 11, 2000, while the right image is from December 1, 2008. In both images black regions are umbrae of sunspots, blue are penumbrae, and red are faculae. The lower plot shows the Sun’s irradiance (how much energy is received in a set area at a set distance) in the Strömgren b filter at a distance of 1 Astronomical Unit over the solar cycle from mid-1999 to mid-2010. The two blue lines are the times of the two top images, while the red lines are the average irradiances for 2000 (top) and 2008 (bottom). Figure 1 in the paper.

To investigate how a star’s brightness depends on some fundamental parameters, the authors of today’s paper ran simulations to see how much a star’s metallicity (how much of the elements besides hydrogen and helium it has), inclination of the viewing angle, and effective temperature affects its brightness variations. They used a solar brightness model called SATIRE which sums up the brightness from the quiet surface of the star and the areas covered by sunspots and faculae to figure out the total energy output. Using this model and the spectral synthesis code ATLAS9, they then calculated stellar spectra for a variety of metallicities, viewing angles, and effective temperatures. 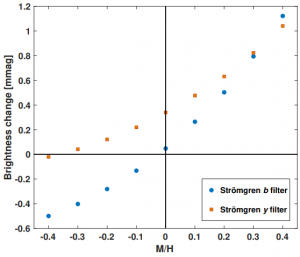 Figure 2: This shows the measured brightness change of a star over its magnetic cycle in the Strömgren b and y filters as a function of metallicity compared to the Solar value (which is zero, by definition). A change in either direction away from zero on the vertical axis represents an increasing amplitude of variation. Figure 4 from the paper.

The authors discovered that changing the metallicity, effective temperature, and even the viewing angle of a star relative to the Sun by just a small amount changed the brightness variations significantly. Figure 2 shows how the brightness changes based on metallicity compared to the Solar value when measured through two important filters used in astronomy, the Strömgren b and y filters. It’s important to note that in this plot changes in both directions away from zero in the vertical axis represent increasing amplitude in brightness variation. Changing the metallicity causes the star’s brightness to change by different amounts at different wavelengths, which manifests as different brightness changes measured in the two filters.

Ultimately, the authors concluded that the Sun’s metallicity, effective temperature, and our viewing angle from near the equator all fall into a sweet spot where the amount of faculae and sunspots almost perfectly cancel each other out and cause the Sun’s overall brightness to remain amazingly constant over its 11-year magnetic cycle. They do caution that the models that were used were 1D-models and they hope to investigate further in future work using more powerful 3D-models that incorporate more realistic physics as well. So there you have it! Take some time today to appreciate just how stable our Sun really is.

The featured image is an imaginative painting called “A Solar Twin,” by myself.