Title: Identifying Interstellar Objects Trapped in the Solar System through Their Orbital Parameters

Last year, our solar system was visited by our first recorded interstellar guest, ʻOumuamua. Based on the extreme trajectory of this asteroid, it is clear that it did not originate from within our solar system. Thanks to ʻOumuamua, we now have a better idea of what interstellar objects may be like. However, its passing has left astronomers wondering if some of the objects in the solar system originate from outside our neighborhood. In today’s paper, Siraj and Loeb model the most likely orbital parameters for a captured interstellar object. Based on these parameters, they identify several asteroids which may have originated from outside our solar system. Closer study of these objects could tell us more about exoplanet systems.

How many are out there?

Previous calculations by Do et al. have placed the number density of interstellar objects the size of ʻOumuamua to be

. This means that gravitational interactions with the Sun and Jupiter should result in the capture of similarly sized objects at a rate of

per year. So at any given time, there could be around

Using an N-body simulation written in Python, Siraj and Loeb ran a simulation of

particles to see how many were captured. To do this, they initialized each particle at its point of closest approach to Jupiter. Each particle was given a velocity of 20 km/s at a random angle. This is the average velocity of nearby stars. They then ran the simulation backwards to find which of these particles had a velocity greater than the escape velocity of the Jupiter-Sun system. These would represent unbound objects, which came from outside the solar system. Running the simulation forwards determined which of these particles had velocities less than the escape velocity, meaning they had been gravitationally captured. Of the

objects they started with, 2571 were determined to be captured interstellar objects. These objects had a range of orbital parameters, which are shown in Figure 1. 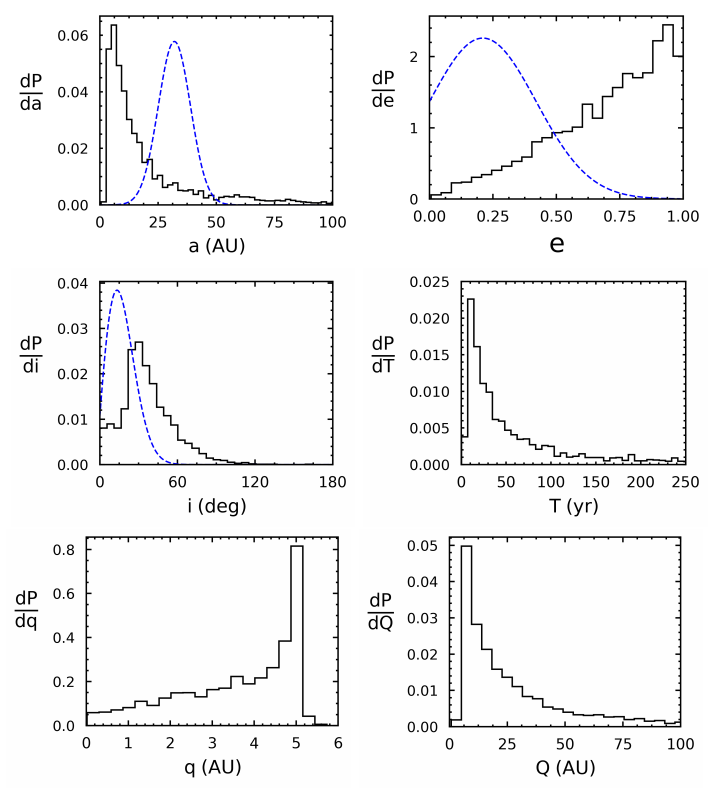 Once these parameters had been established, Siraj and Loeb compared them to known objects in the solar system, to determine if we can identify a visiting deep space object using its orbital parameters. In particular, they looked at the Centaurs, a group of objects that lie between the orbits of the outer planets. Based on the distribution of orbital elements for the Centaurs, the authors found that at orbital inclinations of

there should be more interstellar objects than Centaurs. Setting constraints on the absolute magnitude based on ʻOumuamua and using these orbital parameters, Siraj and Loeb found four cataloged objects which may have interstellar origins.

Figure 2: From observations of ‘Oumuamua and the orbital parameters derived in this paper, Siraj and Loeb identify four objects which may have interstellar origins. Image Credit: Table 1 in paper.

Can we find them?

When the Large Synoptic Survey Telescope (LSST) comes online, it could be used to look for captured interstellar objects. The authors estimate 66 trapped interstellar objects will be detectable by LSST. Follow-up observations on these objects can help us gain deeper insight into how planetary systems are formed, what interstellar space is like, and the possibility of life in other star systems. If LSST cannot identify any similar objects, perhaps ʻOumuamua was a very unique visitor.