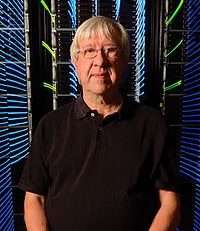 The Large Synoptic Survey Telescope (LSST), the next big astronomical survey that is due to begin science operations in 2023, will yield 60 petabytes of data over its ten-year lifespan. That’s 60 with 15 zeros after it. For comparison, let’s say a typical laptop stores one terabyte of data — LSST will require the equivalent of 60,000 laptops of storage. How will we store all this data? And once LSST is completed, how will we ensure the data is kept live and easily accessible so that astronomers of future decades can still use it? These are the questions that Dr. Alexander Szalay says “keep [him] up at night.”

Dr. Szalay is the Bloomberg Distinguished Professor of Physics and Astronomy and Computer Science at Johns Hopkins University. His journey to get there is atypical. He was born and raised in Hungary and graduated high school under Russian occupation. His decision to pursue science was only natural since his parents were both scientists and the family lived on a nuclear physics compound. Becoming a scientist was also a way to preserve intellectual freedom under the oppressive regime. In high school, Dr. Szalay began contributing to the Hungarian journal called Mathematical and Physical Journal for High School Students, or KöMaL. The journal posed physics problems that students could submit answers to. Particularly creative answers warranted later publication in the journal. His involvement with KöMaL ultimately led to participation and placement in national physics competitions.

Dr. Szalay completed his undergraduate and graduate degrees in physics in Hungary (while playing in the rock band Panta Rhei). He described his research as being “largely on [his] own” since no one in Hungary at the time was also studying neutrino masses and their effects on large scale structure in the universe. He then moved to a postdoctoral research position at the University of California, Berkeley, where he began transitioning into more theoretical topics. In addition to theoretical work on dark matter (which involved coining the phrases “hot,” “warm,” and “cold” dark matter), Dr. Szalay has also developed new statistical techniques for probing cosmology using galaxies and provided the first (albeit low-significance) detection hints of Baryon Acoustic Oscillations using 400 galaxies.

Now, Dr. Szalay considers himself to be half computer scientist. His journey into data-intensive computing and database management began when Johns Hopkins joined the Sloan Digital Sky Survey (SDSS). In particular, “no one wanted to work on databases, but [he] realized that no one could do the science they wanted if the database wasn’t organized.” Dr. Szalay designed the efficient search and storage mechanisms that comprise the SDSS Science Archive, one of the most-used astronomy databases today. Since then, he has collaborated with several other computer scientists to expand the system built for SDSS to many other applications, including medical imaging and material science. 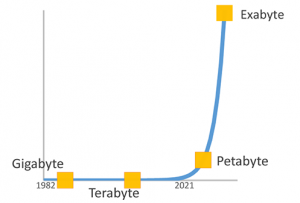 Figure 2. Projected growth of data volume for astronomical surveys. LSST will reach the petabyte scale in the 2020s, while future projects will rapidly surpass that scale. (Credit: Johns Hopkins Institute for Data Intensive Engineering and Science)

The next looming data problem on the near horizon is LSST. Until now, scientists have “just thrown data across the wall” at publishers to host, but 60 petabytes of data will be far too huge. Furthermore, Dr. Szalay notes that “keeping data live is much harder than people realize.” Yet funding agencies are generally unwilling to pay for data storage once the experiments that produced them wrap up, despite the relatively low cost compared to constructing the experiment itself. Further, the data problem will only get worse as larger projects come online (see Figure 2). A possible solution is the creation of a national endowment for scientific data (much like what already exists for works of art), wherein a small pool of money is set aside solely to keep these datasets alive. But there are no templates or examples to work with, so this is a solution that “needs to be invented here and now.”

To aspiring undergraduate researchers, Dr. Szalay says to “keep an open mind and think critically.” Many research projects could benefit from more time spent thinking critically about new solutions — science is riddled with stories of accepted results that were then shown to be incorrect. Sometimes all it takes to break through new understandings is a new perspective to “think between the lines.”

If you’re interested in hearing more about Dr. Szalay’s work, check out his plenary talk at 8:10 am on Thursday, January 10th at #AAS233!