Since Galileo first pointed a telescope at the stars, most of our understanding of the universe has been driven by observations in optical (or close to optical) wavelengths. This is especially true when we study star formation. Astronomers usually measure star formation rates with tracers like ultraviolet light or optical emission lines, both of which are produced by recently-formed massive stars.

Based on these tracers, we believe that ever since redshift z~2, the star formation rate of the universe has dropped. But what happened before z~2? Unfortunately, the universe becomes frustratingly difficult to probe at higher redshifts. Dust blocks much of the optical and UV light from stars, and we’re often limited to narrow “pencil-beam” surveys, making it difficult to observe anything beyond a few narrow fields of view. 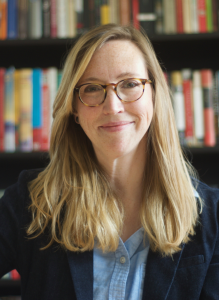 Prof. Caitlin Casey from the University of Texas Austin

Recently, radio instruments like the Atacama Large Millimeter Array (ALMA) have begun to widen our viewpoints. “We’re trained to think in that [infrared, optical, and UV] parameter space, and it’s very easy to lose sight of the wealth of information that’s available to us across the spectrum,” says Professor Caitlin Casey. Casey, a professor at the University of Texas Austin and this year’s recipient of the Newton Lacy Pierce Prize, will be speaking at #AAS233 about how she uses ALMA to survey the cold dust and gas in distant galaxies and to probe what she calls “the obscured early universe.”

For instance, Casey’s work with ALMA has opened the door to a population of galaxies that isn’t very well-studied: dusty galaxies with extremely high star formation rates. (See this Astrobite for a little more background about these galaxies.) It’s hard to grasp just how extreme these systems are; they can form up to thousands of solar masses of stars every year (in comparison, our Milky Way only forms around one solar mass per year) and may contain over a billion solar masses of dust alone. “It’s a lot of dust!” laughs Casey.

Until recently, it was believed that these extreme dusty galaxies were quite rare—but now, radio observations suggest otherwise. Casey and her group are developing new techniques to count these strange galaxies by modeling the entire “obscured early universe,” and they’ve found that extreme dusty galaxies could be much more common than previously thought. “It’s been a long-standing problem that cosmological simulations of the universe just can’t describe these [starbursting galaxies],” says Casey, so if dusty starburst galaxies are common, we may need to prioritize radiation by dust in our simulations.

Casey has been working on problems like this for a while, ever since her PhD. “It was kind of a happy accident,” she says. “The research I did in undergrad was all in optical [wavelengths].” But her PhD advisor was working on some of the early studies of sub-mm galaxies, which had so far only been discovered at a single wavelength. So Casey started trying to understand how the population of observed sub-mm galaxies could be biased, and what kinds of galaxies might be missed in such a survey.

Casey’s path to astronomy was also a bit of a happy accident. Every year, her school in Missouri held field trips to a planetarium, which helped spark her interest in astronomy. “I was hooked [on astronomy] pretty early on,” she says, despite “a period when I wanted to become a mathematician… but then my brother became a mathematician, and then I wanted to do something else instead.”

What advice does Casey have for students just starting their careers? “Take good notes,” she says. “We all forget details! Students should never feel embarrassed if they forget something.” She also notes that pressure to just know things and be “smart” can lead to imposter syndrome, so it’s important to remember that “science is a human activity” and everyone (even authority figures!) has flaws and biases. After all, “no one really knows what they’re doing at first!”

If you’re interested in hearing more about Dr. Casey’s work, come check out her plenary talk at 4:30PM on Monday, January 7 at #AAS233.