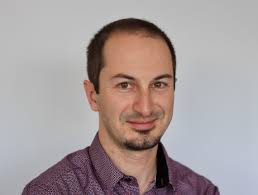 Primordial black holes are like dark matter particles; spinning grains of dust are like binary black holes; the gravitational wave background from pulsar arrays is like the cosmic microwave background from radio interferometry. This is how Yacine Ali-Haïmoud, Assistant Professor of Physics at New York University, sees the world. “I like to look for analogies between things which seemingly have nothing to do with one another,” he says. Physics is full of phenomena in far-flung regimes that follow similar laws. Ali-Haïmoud, who is giving the Warner Prize Lecture at AAS 234 this month, follows these physical analogues to theorize about cosmological imprints on observables.

A primary interest for Ali-Haïmoud is primordial black holes (PBHs), which have recently made a comeback as a dark matter candidate. This idea was first floated in the 1960s, and became popular again after the 2015 detection of black holes by LIGO (see this astrobite). These hypothetical black holes may have formed via gravitational collapse in the early universe, and could range from the mass of an asteroid to thousands of times the mass of the sun.

Ali-Haïmoud is using the cosmic microwave background (CMB) to place constraints on PBHs. Black holes accrete nearby gas, heating up the gas and injecting more energy into the surrounding plasma. This leads to a change in the ionization history of the plasma, which changes the time of last scattering of CMB photons. We would then see a signature of this effect in the statistics of the CMB temperature anisotropies that we measure today. Ali-Haïmoud and others have already constrained PBH parameter space with Planck data, but they have not yet found evidence that PBHs contribute to the dark matter budget. “What I’ve been working on is building more precise translations from microphysical models to observables,” Ali-Haïmoud says, “such that if you do see something that departs from the standard cosmology, you should be able to actually pinpoint more accurately what possible dark matter model could cause this.” Future CMB maps from the Simons Observatory will probe this effect with higher sensitivity and hone in on dark matter candidates including PBHs.

Ali-Haïmoud is also interested in the story of interstellar dust, approaching it both theoretically and observationally. Large dust grains absorb UV photons and heat up, exciting the internal degrees of freedom of the grains. This is re-radiated in the infrared, but observers have also detected an unexplained bump in microwave emission. One hypothesis is that some dust grains are spinning at just the right frequency to produce this emission. A class of molecules called polycyclic aromatic hydrocarbons (PAHs) might fit the bill; Ali-Haïmoud describes these as “the dark matter of interstellar physicists.” We have a lot of indirect evidence of these large chemical compounds in the interstellar medium, but it is difficult to identify the exact types of molecules and their abundance.

As a step towards identifying interstellar PAHs, Ali-Haïmoud worked out the spectrum that PAH dipoles would produce. He notes that the electric dipole moments of the PAHs are analogous to the mass quadrupole moment of a binary black hole. But unlike black holes, PAHs are small enough to be governed by quantum laws, so they undergo discrete rotational transitions. These manifest in spectral lines that clump together in comb-like features, producing unique signatures for each molecule. Ali-Haïmoud went observing to hunt for these features (“I’m pretty proud of this because I’m a theorist,” he says), taking data of a cloud known to host anomalous emission. Alas, he didn’t find any spectral comb signatures, but he used this non-detection to place limits on the amount of certain PAHs. “One of the things I’m hoping is that other people will do this kind of observations, which no one had done before,” he says.

Along a different vein, recent discussions with colleagues got Ali-Haïmoud interested in pulsar timing arrays (PTAs) as a way to map out the gravitational wave background. PTAs measure frequencies far below LIGO by monitoring pulsars, stable rotating neutron stars with a beam of radiation. This appears as a pulse when it swings by the detector, and in the absence of gravitational waves, PTAs would detect pulses at extremely regular time intervals. A stochastic gravitational wave background, such as that from binary supermassive black holes, would perturb these arrival times. Ali-Haïmoud is working with PTA experts and bringing in his own expertise to develop the formalism for mapping the gravitational wave sky with these arrays. He compares this technique to the interferometric mapping of the electromagnetic background (the CMB) with arrays of detectors, which provided the first constraints on anisotropies and later polarization. “Here it’s philosophically similar, what we’re trying to do,” he says, “in the sense that we’re trying to understand what are the geometric properties of the maps that one could obtain from arrays of pulsars.”

Ali-Haïmoud considers himself lucky to have discovered his interest in physics early on. He attended École Polytechnique in France to study physics and math as an undergraduate, and there took a course on cosmology that piqued his interest. A drive for this research led him to start a PhD at Caltech—but this required a bit of luck and determination as well. He didn’t do very well on a nuclear astrophysics exam at Polytechnique, and the professor was supposed to write him a recommendation for PhD programs. “I still went and talked to him, and was like, ‘Look—this is really my passion and I really need your letter, and I’m willing to redo the exam or [do whatever extra work] it takes,’” Ali-Haïmoud says. “So don’t despair, and if you have a passion, you have to really push for it and not stop at errors.”

For undergraduates aspiring to a career in academia, Ali-Haïmoud emphasizes the importance of talking to professors and others in your field of interest. “Towards the last couple years of undergrad, I think it’s good to get in touch with faculty members to try and go beyond just what you learn in class, and try to see connections,” he says. More generally, “It’s always better to go and talk to people, whether they’re big shots or not big shots. You always learn more—even if you just have some poorly phrased idea, you always learn more by sharing this [idea] with people and getting some kind of feedback.”

After completing his graduate studies at Caltech, Ali-Haïmoud completed postdocs at the Institute for Advanced Study and Johns Hopkins University. In 2017, he became an Assistant Professor of Physics at New York University. “It’s good to be aware that it’s a long road and it’s not guaranteed for anyone, that there’s unfortunately a huge amount of luck involved,” Ali-Haïmoud advises. “So professors are really people who are hardworking and were also extremely lucky.”

Hear from Ali-Haïmoud at his Helen B. Warner Prize Lecture, “Hunting for Dark Matter in the Early Universe,” on Monday, June 10 at 12:20pm at #AAS234.