In the heart of a trainwreck galaxy: potential for future gravitational waves

Title: Discovery of a close-separation binary quasar at the heart of a z ∼ 0.2 merging galaxy and its implications for low-frequency gravitational waves

LIGO has however shown direct evidence for the merging of solar mass black holes with atypically large masses between 10 – 40 Msun, and although easier to observe due to their strong gravitational signal, their existence has continued to challenge theoretical explanations. Scaling up to even greater masses does not reduce the pressure on theory either, as the predicted dominant mass contribution to the yet undetected GWB is from super-massive black holes (SMBHs) on the order of 10^8 – 10^9 Msun. 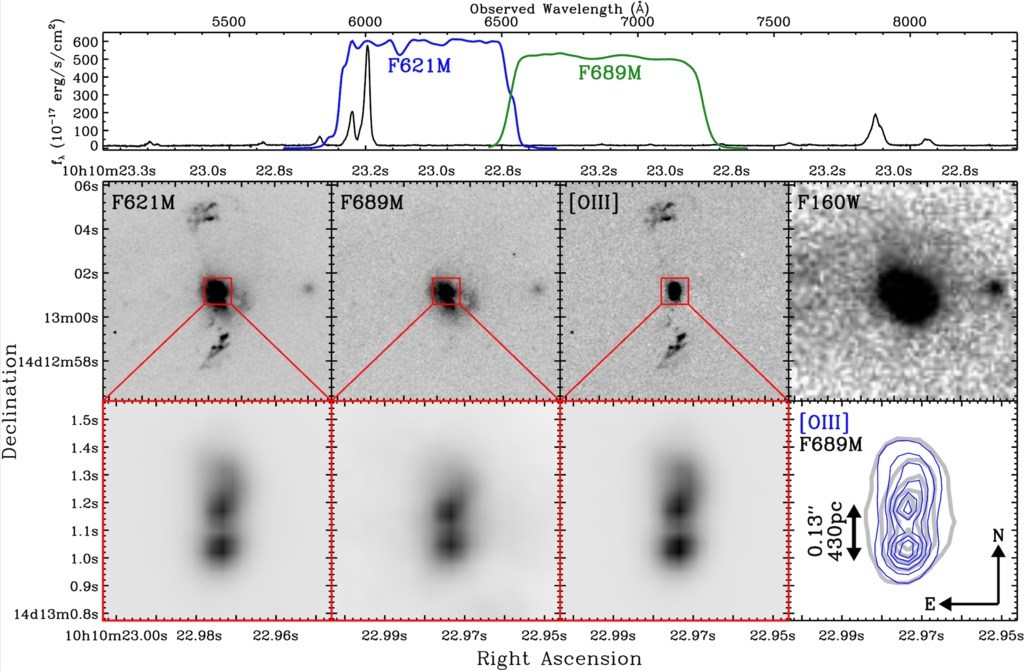 Figure 1. Hubble Space Telescope images of SDSSJ1010+1413 showing wide-field galaxy morphology and zoom-in of the central SMBH pair with the F621M, F689M, [OIII], and F160W bands. The galaxy shows evidence of a past merger: a disturbed shape and stripped gas streams. The [OIII] extent is seen to be coincident with the continuum F689M light. Taken from Figure 1 of Goulding et al. 2019.

It has long been hypothesized that SMBHs inhabit the central-most regions of almost all galaxies, and accumulative mass through the slow accretion of gas and stellar material. When galaxies undergo the often violent processes of a wholesale merger, these SMBHs are predicted to collect within the central region of a galaxy and become gravitationally bound on short Myr timescales, accelerated by dynamical friction. However, the black hole pair can only bleed off so much energy through interacting with nearby material and at some point within the final parsec the merger is predicted to stall out. This so-called “final parsec problem” has yet to be resolved. For the sample of intermediate-mass black hole mergers suggested by the LIGO observations, it appears that nature has ways around this problem. Whether this is true for SMBH mergers has yet to be seen.

Putting the final parsec problem aside, the authors of today’s astrobite provide definitive evidence for a precursor system which may one day produce a low-frequency gravitational wave event consistent with a strong contribution to the GWB.

As shown in Figure 1, observations with the WFC3 instrument aboard the Hubble Space Telescope revealed a pair of tightly bound SMBH candidates in a highly luminous post-merger galaxy, poetically named “SDSSJ1010+1413”. Accounting for the cosmological distance, the separation between the SMBHs is found to be ~430 pc. Previous studies examining the velocities and dynamics of the galaxy confirm the outward tell-tale signs of a trainwreck galaxy and provide the context for the apparently resolved pair of SMBHs in its core. Special imaging with an appropriate [OIII] narrowband filter corroborates this picture by defining the extent of the extremely luminous [OIII] emission and characteristic ionized gas associated with powerfully accreting SMBHs (AKA quasars). However, coincident X-ray observations with the Chandra Space Telescope showed very little X-ray light which, when compared to infrared estimates, suggest an obscuring cloud of thick gas along the line of sight.

Despite the awesome resolution of the Hubble Space Telescope (~0.04”), such an observation of a supposed SMBH pair may be ambiguous. To increase confidence in this interpretation, the authors modeled each of the sources with a coincident point-like model and an extended Gaussian model. Even so, a single SMBH with extended [OIII] and bisecting obscuration due to a dust lane could mimic this scenario, albeit with a significantly worse fit. Given the former scenario, each SMBH is estimated to have a minimum mass of 4×10^8 Msun based on the Eddington luminosity limit, putting them in the sweet spot of GWB contribution. 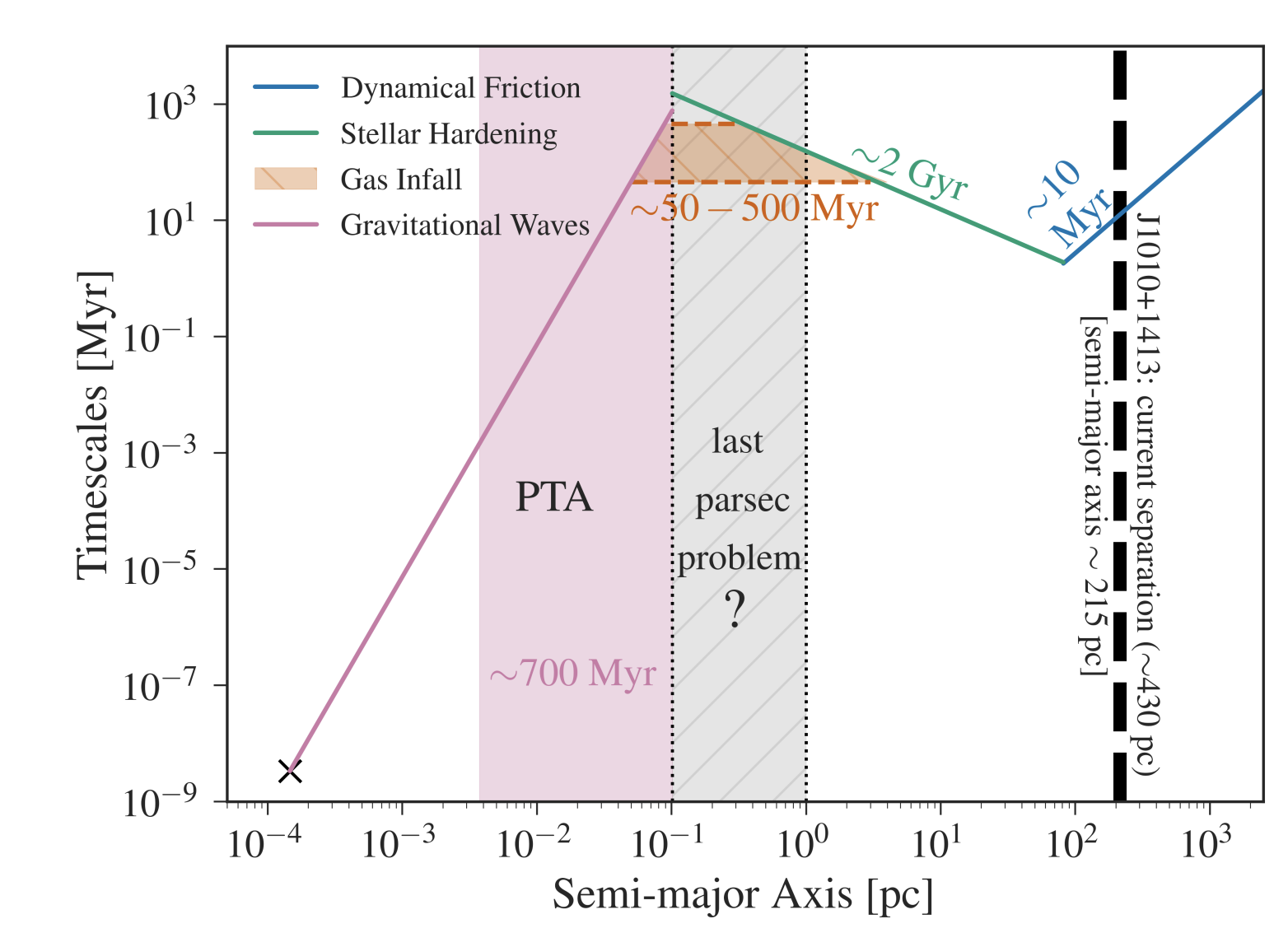 Figure 2. Merger stages with timescales shown. From the right, dynamical friction accelerates the first stage of coalescence, followed by stellar hardening. Gas infall may help prevent stall-out and overcome the “last parsec problem”. Then in the final stages of coalescence at < 1 pc, Pulsar Timing Arrays should be sensitive to the predicted nanohertz gravitational wave signal prior to the merger. Taken from Figure 3 of Goulding et al. 2019.

Lastly, the authors make tentative predictions for a future low-frequency high-mass gravitational wave event, as shown in Figure 2. By considering carefully motivated arguments for dynamical friction, they surmise a coalescence timescale of 0.1 – 2 Gyr, where the lower limit is argued from the seemingly large gas reservoir near the SMBHs, which may help dissipate energy and rapidly close their orbital separation. Ignoring the ‘last parsec problem’, they argue that once the system reaches < 0.1 pc separation, the gravitational wave emission will enable the pair to finally merge within ~700Myr. Given that the lookback time to this galaxy at z~0.2 is on the order of the predicted merger timescale, this discovery provides strong evidence that such galaxies could be contributing to the GWB right now.

The low-frequency nanohertz GWB signal will not be detectable by current observatories such as LIGO. However, these increasingly powerful facilities will soon be complemented by hyper-sensitive Pulsar Timing Arrays which should be able to detect a nanohertz GWB signal, as may be produced by such a pair of quasars in this and other trainwreck galaxies.

I am a second year PhD student at the Cosmic Dawn Center at the University of Copenhagen, where I study the formation and evolution of galaxies across cosmic time with incredibly deep observations in the optical and infrared. I got my start at a little planetarium, and I've been doing lots of public outreach and citizen science ever since.