Title: A Sub-Neptune Exoplanet with a Low-Metallicity Methane-Depleted Atmosphere and Mie-Scattering Clouds

During the nine and a half years in which NASA’s Kepler Space Telescope was operational, it discovered thousands of new extrasolar planets which show an astonishing diversity of physical properties. Many of these newly discovered systems are unlike anything found in our own Solar system, with its familiar inner terrestrial planets and outer gas giants. These include the discovery of highly irradiated hot-Jupiters; gas giants with masses similar to Jupiter orbiting extremely close to their host stars, and planets with masses and radii intermediate between Earth and Neptune, often described as super-Earths and sub-Neptunes. Although not found in the Solar system, these latter planet types are surprisingly common around other stars and it’s possible that up to 80% of planets in the Galaxy might lie within this range. 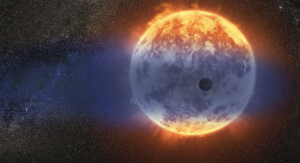 Figure 1: An artists impression of the planet Gliese 3470 b surrounded by an extensive hydrogen atmosphere. Image credit: NASA/ESA/D. Player, STScI.

An important long-term aim of exoplanetary science is the discovery of habitable planets like the Earth but the majority of observations so far have been for hot, giant planets with extended atmospheres and large scale heights. The atmospheric characterisation of small, rocky planets like the Earth is, at present, largely unfeasible due to the tiny size of these planets relative to their host stars. If we are willing to consider the habitability of larger, intermediate-mass planets, such as super-Earths, orbiting close to small host stars, then the chances of successful atmospheric detections improve. The drawback to this method is that presently the bulk composition and atmospheric properties of these planet types remains uncertain, in particular, it isn’t clear what proportion of these planets resemble scaled-down versions of gas giants or perhaps larger versions of rocky, terrestrial planets with extended atmospheres, or maybe even a combination of the two. The authors of today’s paper bring us a step closer to understanding the atmospheric properties of these intermediate-mass planets.

Gliese 3470 b, also known as GJ 3470 b, is a sub-Neptune exoplanet located approximately 96 light-years away in the constellation Cancer. It orbits very close to a faint red dwarf star much cooler than the Sun, taking just over three days to complete an entire orbit of its star. The planet has a mass of 12.6 Earth masses which is intermediate between Earth and Neptune (with a mass of over 17 Earth masses). A team of astronomers led by Björn Benneke of the University of Montreal, Canada, observed GJ 3470b using the combined capabilities of both the Hubble and Spitzer space telescopes to study the planet’s atmosphere using the techniques of transmission and emission spectroscopy (see this astrobite for a description of transmission spectroscopy). The team performed a combined analysis of 12 transits and 20 eclipses obtained over many years to produce a visible to infrared transmission spectrum covering a wavelength range of 0.55 – 5 microns (shown in Figure 2). The researchers expected to find an atmosphere strongly enriched in heavier elements such as oxygen and carbon, similar to that found in Neptune’s atmosphere, where they can form water vapour and methane, but instead found a mostly clear atmosphere, unpolluted by heavier elements that more closely resembles the hydrogen and helium-rich composition of the Sun. 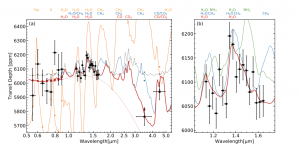 Figure 2: Transmission spectrum of Gliese 3470 b: a) Black data points show the variations in transit depth as a function of wavelength from HST and Spitzer observations. The red line shows the best fit model with near-solar water abundance and strong methane depletion. Figure 2 in the paper.

Most exoplanets found this close to their host star belong to the class of ‘hot-Jupiters’ and are commonly believed to have initially formed far from their stars beyond the frost line, the distance from the protostar where it is cold enough for volatiles like water and methane to condense, before migrating inwards to their current positions, and are mainly composed of hydrogen/helium and other volatiles. The most plausible explanation for the unpolluted atmosphere of GJ 3470 b is that it originally formed as a dense, rocky core close to its host star, before rapidly accreting primordial gas from the protoplanetary disc around the young star. This process appears to have been interrupted before the planet could accrete enough material to become a hot-Jupiter. One possible mechanism for this is that the disc somehow dissipated before the planet had finished accreting material and therefore GJ 3470 b became stuck as a sub-Neptune. 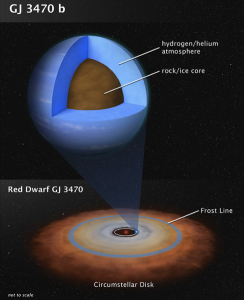 If this explanation is correct, it represents an important, and perhaps surprising, discovery for planet formation theories. GJ 3470 b will also present a good target for observations by NASA’s upcoming James Webb Space Telescope which will be able to probe the composition of the atmosphere in the infrared (where obscuring hazes are less of a problem) in unprecedented detail.