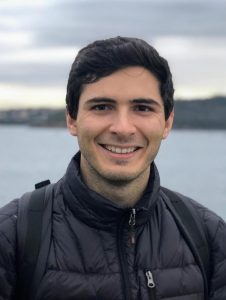 This guest post was written by Jacob Azoulay for an assignment in the Spring 2019 Another Earth class taught by Professor David Kipping. As part of the course, students were tasked with writing an Astrobite-style summary of a recent research paper related to planets or exoplanets. You can check out ALL of the bites from the class at planetbites.wordpress.com. Stay tuned for more bites in this series!

Jacob graduated from Columbia University in May 2019 with a Major in Economics-Mathematics and a Minor in Physics. He hopes to pursue his interest in astronomy and physics at graduate school, and ultimately contribute to future research about our universe. He enjoys playing classic rock on the guitar, solving New York Times crossword puzzles, and building modern furniture.

It’s been with us since before humans laid foot on Earth. Any person you have ever known or heard of has seen it shine bright in the night sky. Yet, researchers can only speculate about its creation.

The Moon is estimated to have formed 4.53 billion years ago, when a Mars-sized celestial body collided with Earth, spewing out debris that eventually clumped together. But what if this “giant-impact hypothesis” is not, in fact, how the Moon formed? Luckily, by using computer simulations, Robert I. Citron, Hagai B. Perets, and Oded Aharonson — the authors of today’s paper — can help us better understand our Moon’s origins.

Any scientific hypothesis for the formation of the Moon must explain three key points: the low density of the Moon, the current angular momentum of the Earth-Moon system, and the similarities in isotope ratios between Earth and the Moon. Today’s scientific community tends to favor the Giant-Impact Hypothesis precisely because it addresses these three features. However, collisions large enough to form the Moon with a single impact are rare, appearing in only 2% of computer simulations. Instead, faster smaller collisions are more likely, giving credence to the Multiple-Impact Hypothesis.

As its name suggests, the Multiple-Impact Hypothesis theorizes that there were several smaller impacts throughout the course of Earth’s formation. Each of these impacts discharged rock, creating an accretion disk — a rotating disk of debris matter — around the Earth. With low relative orbital velocities, particles from the accretion disk would gently clump together, growing larger like a snowball rolling down a mountain. With each orbit, the clump would collect more and more mass, which would increase its self-produced gravity. Eventually all the debris would coalesce into a rigid-body satellite called a moonlet (see Fig. 1 for a visual depiction of this process). This entire process is estimated to take about 50 years — a relatively short period compared to the millions of years it took the Earth to form.

Figure 1. Moonlet formation as a result of an impact on Earth.

Such moonlet-creating impacts are estimated to have occurred on average every six million years, over the course of which a pre-existing moonlet’s orbit drifts further away from the Earth due to tidal migration (fun fact: our current moon spirals away from Earth about 3.82 centimeters per year!). As the pre-existing moonlet orbits further from Earth, a subsequent impact would produce a newer moonlet, which would orbit Earth with a smaller semi-major axis. A two-moonlet system would thus evolve with a newer moonlet orbiting closer to Earth and an older moonlet orbiting further away from Earth (see Fig. 2a).

According to the Multiple-Impact Hypothesis, the two moonlets would eventually merge to form one stable larger moonlet (see Fig. 2c). This newly-merged larger moonlet would take the place of the outer moonlet, as a subsequent impact would then form a new inner moonlet. Then just wash, rinse, and repeat as the outer moonlet grows larger and larger until it evolves into the Moon as we know it.

While in theory the Multiple-Impact Hypothesis holds up, would impacts with Earth actually produce stable moonlets in real life? With the advent of fast processing computing power, the authors easily ran thousands of simulations — each with slight parameter adjustments — to determine which outcomes are most likely.

The first simulations tested how a subsequent impact with Earth would affect the orbit of a pre-existing moonlet. Each simulation began with the pre-existing moonlet orbiting Earth at around 17 Earth radii (~100,000 km) away from Earth — the expected tidal drift outwards over the course of the estimated six million years between impacts. For comparison, the Moon is located at a distance of about 60 Earth radii today.

In each simulation, the incoming colliding body — the impactor — was assigned a random mass, velocity, impact angle, initial orbit, and impact parameter. After 5000 simulations, the authors found that impactors of an Earth-Moonlet system are unlikely to affect the orbit of the pre-existing moonlet. Almost 90% of the simulations resulted in a stable pre-existing moonlet. The other 10% resulted in the moonlet either collapsing into Earth or ejecting from the system, both of which were likely caused by very fast massive impacts.

The second round of simulations tested the likelihood that a pre-existing outer moonlet and newly formed inner moonlet merge. In these simulations, the outer moonlet was assigned a random mass and distance from the earth, while the inner moonlet was assigned a random mass but an initial distance from the earth of 3.8 Earth radii just outside the Roche limit, below which tidal forces would tear the moonlet apart.

The authors found mixed results. In short, the two moonlets merged about 70% of the time for prograde-prograde systems — systems in which both moonlets orbit the Earth in the same direction. The other 30% of the time, either both moonlets infell individually or as a merged unit (see Fig. 2b), only the inner moonlet infell (see Fig. 2d), or, in rare cases, both moonlets were ejected from the system.

So how did the moon really form?

Unfortunately, there is still no definitive answer to this question. The consensus is that impacts are the likely precursors to the Moon’s formation, but the question is how many? The simulations show that it is possible — at least, in an idealized digital computer world — that billions of years ago, multiple impacts created several moonlets which eventually merged to form the Moon. Although the Multiple-Impact Hypothesis is just that—a hypothesis—hopefully, with future research, we will come to a better understanding of how the moon formed. While we continue to look back in time to try to better understand the origins of our moon, it’s also important to look up at night and appreciate the Moon and its beautiful glow.